Purpose of subliminal skull in Return of the Jedi?

In the climax of Star Wars: Return of the Jedi Darth Vader throws Emperor Palpatine over a precipice and just as he does so, a subliminal image of a skull is flashed on the screen over Vader's face. The image only appears for a fraction of a second: 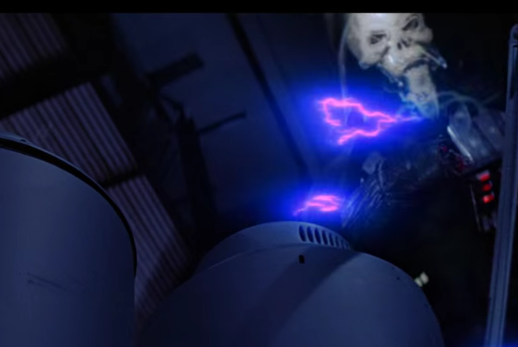 Has this subliminal image been explained by any of the makers of film as to its origin or purpose?

I know that in the 1960s it was considered cool to insert single stills into movies that were either pornographic or images of death, like skulls. Is this some kind of homage to that phenomena by Lucas?

As Oliver has pointed out, the shot is not subliminal at all, as most people, (including myself when I first saw the film in 1985 as a 7 year old) clearly notice the extremely brief but overtly visible 'skull', through Vaders mask and helmet.

Again, as has been pointed out in the comments section, the Emperors use of force lightning fries Vader to the extent that it causes or contributes to what are ultimately mortal injuries, presumably by damaging the life support component of his suit and creating a type of X - ray effect, with the intention likely to be in order to both demonstrate how badly affected Vader was and on a more thematic level, it is the second of only 3 scenes in the original trilogy that demonstrate that Darth Vader is a physical human being.

Subliminal images do not register consciously where as this image was, to my knowledge, noticed by most who have seen the film.

Not the answer you're looking for? Browse other questions tagged star-wars return-of-the-jedi editing .

34
In Star Wars, can a Jedi kill?
6
What is the right age for starting a training for Jedi?
17
Why was the Force Ghost scene altered in the 2004 DVD version of Return of the Jedi?
4
Did Jabba the Hutt force himself on the captured Leia?
6
Was Luke's lightsaber recovered after the final battle with Vader?
5
What planets/systems are shown at the end of Return of the Jedi?
19
Are Snoke bodyguards old Jedi trainees?
0
Why didn't Admiral Ackbar recognize Luke Skywalker's name in Return of the Jedi
14
Did Yoda/Mace Windu have a Jedi Master?