Snape has always treated Harry with pure and utter loathing during the whole Harry Potter series and always looked for a chance to put him down during class. But was his helping/saving of Harry for Harry's sake, or for the sake of helping Lily's son?

The whole purpose of Snape's actions throughout the series is to protect Potter. From the first movie (where he tries to neutralise Quirrell's spell during the Quidditch game) to the agonised conversation he has with Dumbledore about Potter's fate confirm this.

It could be that he is protecting Potter because that is the only way Voldemort can be defeated but his motivation for that is because Voldemort killed Potter's mother. We could suppose that his motivation was just to get revenge for the murder of Lily and caring for Harry was just a means to that end. But his last living actâ€”he donates his memories to Harry so Harry can understand his motivationâ€”suggests he wants Harry to understand why he behaved the way he did towards him. Those memories also explain some of the motivation for his harshness with Harry: Harry has some of the less noble characteristics of his father (who stole the love of Snape's life from him and who was sometimes a bully to Snape). So he loves Harry because he is Lily's son but hates some of his characteristics because he is also his father's son. So he cares for him but also has some reservations about his character.

Moreover, for his role with Voldemort to be convincing, he has to act as though he dislikes Potter. He can pull this off convincingly partially because of his dislike for Harry's father and Harry's behaviour when he emulates his father.

Those mixed motivations show that, ultimately he cares for Harry, but not without reservations.

This question was directly addressed by Professor Dumbledore to Professor Snape himself in the book (as well as in the movie) when Snape expresses his disgust at Dumbledore's revelation of Harry having to die at the cost of Voldemort's fall.

From the thirty-third chapter of Harry Potter and the Deathly Hallows, "The Prince's Tale":

â€śAnd Voldemort himself must do it, Severus. That is essential.â€ť

Another long silence. Then Snape said, â€śI thoughtÂ .Â .Â . all these yearsÂ .Â .Â . that we were protecting him for her. For Lily.â€ť

â€śWe have protected him because it has been essential to teach him, to raise him, to let him try his strength,â€ť said Dumbledore, his eyes still tight shut. â€śMeanwhile, the connection between them grows ever stronger, a parasitic growth: Sometimes I have thought he suspects it himself. If I know him, he will have arranged matters so that when he does set out to meet his death, it will truly mean the end of Voldemort.â€ť

â€śYou have kept him alive so that he can die at the right moment?â€ť

â€śDonâ€™t be shocked, Severus. How many men and women have you watched die?â€ť

â€śI have spied for you and lied for you, put myself in mortal danger for you. Everything was supposed to be to keep Lily Potterâ€™s son safe. Now you tell me you have been raising him like a pig for slaughter â€”â€ť

From the tip of his wand burst the silver doe: She landed on the office floor, bounded once across the office, and soared out of the window. Dumbledore watched her fly away, and as her silvery glow faded he turned back to Snape, and his eyes were full of tears.

The patronus of Snape here signifies his love for Lily and that his only motivation for protecting Harry was because he was Lily's son.

In a way, yes. Mostly, especially to start with, he only took care of Harry for his mother, Lily, the love of his life. Towards the end though, especially that last dying scene, I believe Snape did begin to show affection for Harry. 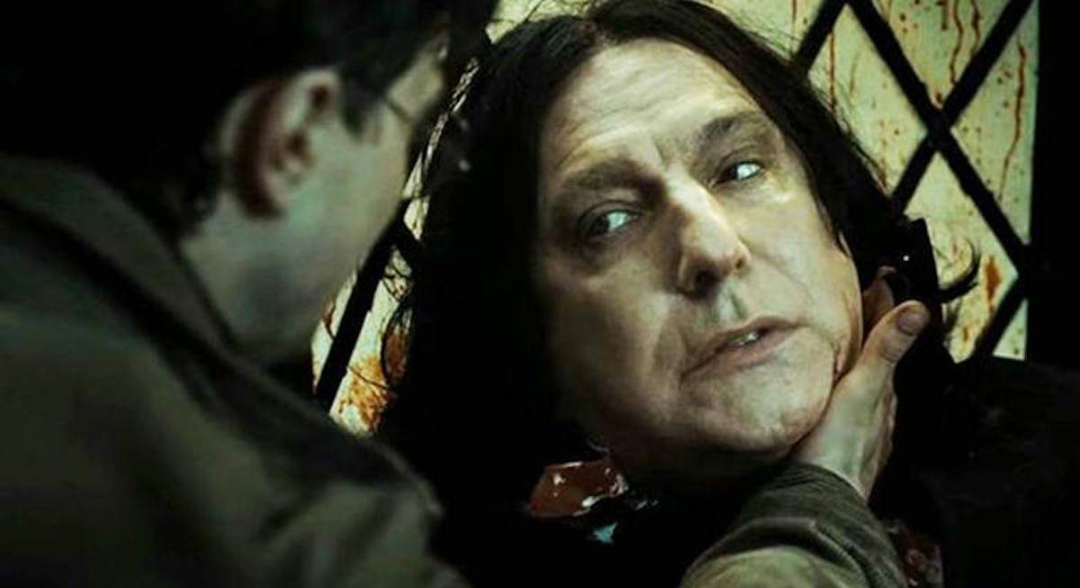 84
Why does Harry only make use of time travel in The Prisoner of Azkaban?
23
Why did Severus Snape present himself as evil to Harry?
28
What is the nature of Professor Snape's Patronus and why does it appear in the Forest of Dean?
14
Were Neville's feelings for Luna foreshadowed earlier?
8
Are unforgivable curses unblockable in Harry Potter?
23
Why did Professor Snape hide his relationship with Lily from Harry Potter?
36
Why didn't Harry Potter become an Obscurial?
8
Did Snape allow Harry to see his memory during Occlumency lessons?
2
Why did Voldemort still trust Snape?