Early in the film Raiders of the Lost Ark, we watch a path appear on a map to represent the movement of characters across the earth.

This scene reminded me of the animation at the beginning of Casablanca, which accompanies the voice-over description of motion of refugees:

And so a tortuous, round-about refugee trail sprang up. Paris to Marseilles, across the Mediterranean to Oran [in Algeria], then by train or auto or foot across the rim of Africa to Casablanca in French Morocco. Here the fortunate ones through money or influence or luck might obtain exit visas and scurry to Lisbon, and from Lisbon to the New World. But the others wait in Casablanca, and wait...and wait...and wait. 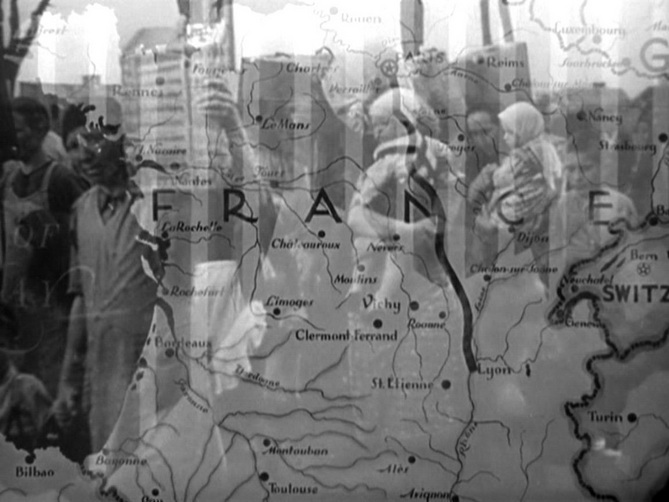 This strikes me as a film cliche, similar to the turning-pages-of-the-calendar device to express the passage of time.

And as I remember, he mentioned that when he was a boy watching movies in the 1930s and 1940s, whenever he saw a map in the movies with a moving line tracing the protagonist's journey he knew it was going to be an exciting movie full of adventures. The book might mention one or move movies with the moving line on a map by name.

So that movie cliche or trope probably dates back to the 1930s or earlier.

According to TV tropes - WARNING! TV TROPES CAN BE ADDICTIVE! - a line moving across a map is a usual part of a travel montage.

The earliest named example mention is in Casablanca (1942), but it is clear the trope is much older than that.

Appears in all four Indiana Jones films, mainly as a homage to its use in the 1930s serials which inspired the movies.

As I remember The Prisoner of Zenda (1937) has an opening credit with a brief discussion of a royal scandal that the movie is supposedly based on (the scandal presumably being as fictional as the movie), and beneath the letters of this opening credit the camera moves southeast across the map of Europe toward the fictional location of the Kingdom of Ruritania somewhere in the Balkans. You can't see where exactly because the map is largely hidden by the letters.

And I think that there might be a travel montage in The Charge of the Light Brigade (1936).

Thus I think that there is reason to believe that it has been a common movie trope since at least sometime in the 1930s.

And this answer indicates it was already common in 1929:

Showing journey on the map 2

Not the answer you're looking for? Browse other questions tagged first-appearance raiders-of-the-lost-ark casablanca .

7
Showing journey on the map