In "Raiders of the Lost Ark", what script appears on the headpiece of the staff of Ra?

In Raiders of the Lost Ark, Indy has "the headpiece of the staff of Ra," which features writing in some language that he cannot read. He takes it to an interpreter with a big beard, who holds the headpiece up to the camera to give us a good look at the headpiece.

The scene with the interpreter is here, helpfully supplied by @BrettFromLA. But this image is better for reading the writing, found at the Indiana Jones Wiki page. 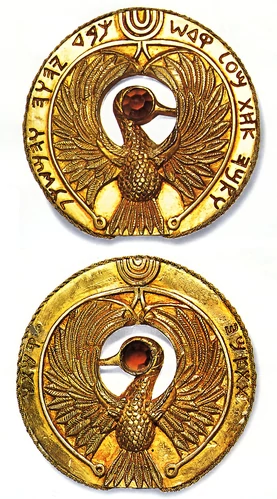 I wonder: what language is that?

despite being implied in the movie to be Egyptian, the writing around the edges appears to actually be Hebrew. The script is related to ancient Phoenician, which was used for both Hebrew and even early Greek, but is called Paleo-Hebrew.

Still, it's not right.

In the first place, the symbols don't match up. The symbols look something like this script, supposedly an alternative script for Hebrew. But they're not really the same. And there's no way to match up the headpiece symbols (cryptogram-style) to form the Hebrew words transliterated on the Indiana Jones wiki page.

In the second place, it doesn't make sense for the message to be in Hebrew. The message was put onto the headpiece not by the Hebrews, but by whatever group of people captured the Ark from the Hebrews and buried it in Tannis. Also the message refers to "the Hebrew god whose Ark this is," obviously not the words of the Hebrews who know the God of the Hebrews as the one God of heaven and earth.

So what would make sense? And can the writing in the photo really be read to mean what it means in the film, the description of the staff useful in finding the hidden Ark?

Yes, that script absolutely is Paleo-Hebrew. I recognized it instantly when re-watching the movie recently. But what is Hebrew doing on an Egyptian artifact? It’s a goof! There’s no good explanation for it.

In order to identify the letters on the headpiece, you need to find a form of Paleo-Hebrew that matches. The writing system went through many stages. For example, see this chart:

Also see how the script looked in old coins: 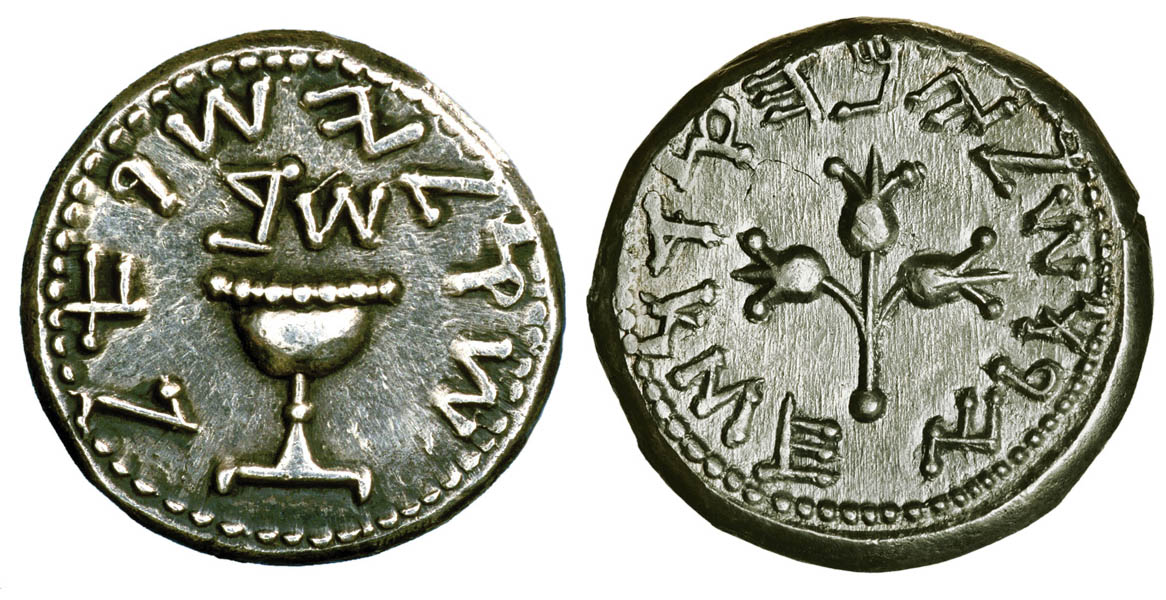 So, looking at the images and the scene, the first and second sides say:

This can be understood as:

There are a lot of problems here, but someone clearly did some research to make this. That makes it even more bizarre that Hebrew was chosen, rather than Egyptian!

Besides the fact that this doesn’t match what is said in the movie, the most obvious problem to me is using gematria notation to indicate 800 cubits (which is already an absurd height—approximately 1200 ft). By writing ‘תת’, it’s indicating that the number is 400 + 400 (ת is 400). This is anachronistic by several centuries, since this system comes from Greek.

For more information about the Hebrew and these errors in the movie, see the article ‘So How Tall is the Staff of Ra?’.

David Regev did a great job of correctly reading the ancient Hebrew letters, however, I'm pretty sure there is a much more elegant reason for the "XX" which is indeed "תת", meaning either the command "Give", or as David guessed logically, the gematria value of 800. But IMHO, what happened is that the person writing the letters didn't know them by heart, but rather transposed using a chart such as the one posted above. I believe this person accidentally (and quite ironically given the whole bit about being off by one and digging in the wrong place!) -- this person accidentally looked one letter after the one he intended. It should have been "WW", which in ancient Hebrew is "שש", which is of course "sheish" meaning six! That solves the whole thing, doesn't it. Of course, I'm just guessing, but I'd bet a lot of money that that is exactly what happened.

BTW, another problem is that the amah (why the old man says "kadam" I have no idea) is more like 18 inches, not 12. If they ever photoshop that scene and dub over a little, they could just change the six to four, and then everything works out.

Not the answer you're looking for? Browse other questions tagged indiana-jones raiders-of-the-lost-ark .

72
How did Indy know not to look into the Ark?
23
What does Indy say to the villagers in "Temple of Doom"?
18
What are Marion and Belloq drinking in Indiana Jones, Raiders of the Lost Ark?
7
What exactly is inside the Ark?
15
Why does the Ark burn the markings off its crate?
23
Has the authenticity of the Raiders story conference transcript ever been determined?
7
The path-on-the-map scenes in Casablanca and Raiders of the Lost Ark
20
What are Elsa's reasons for selecting the Holy Grail on behalf of Donovan?
7
Did "Raiders of the Lost Ark" have a deleted scene with a Nazi soldier killing an hostage?
8
What happened to the Grail Knight?