What is the significance of the cat in the final episode of The Sopranos?

In S06 Ep21 of The Sopranos titled Made in America, there is a cat that the Soprano crew brought over to the office that was apparently a stray.

Yeah, he does that. Sometimes most of the day. Just stares at Chrissy's picture.

Paulie is extremely disturbed by the presence of the cat and even more disturbed that the cat is enamored by Christopher's picture.

You see that shit? Does it all the time, he says. Look at him staring at that dead kid! 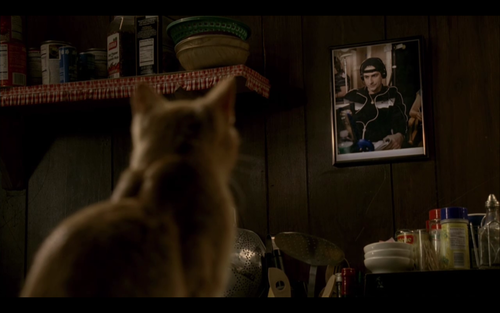 Is there any explanation from the producers/writers of the show as to the significance of the cat and why it is constantly staring at Christopher's picture? Why is Paulie so disturbed by the presence of the cat?

Note: There are A LOT of opinions and speculations about this everywhere on the internet. I am looking for an explanation from the producers/writers on the show (if there is one).

It's connected to the study Dr. Melfi reads at the suggestion of her own therapist. The study says that sociopaths show affection towards babies and pets. Tony, while a remorseless killer of people, does seem to have some measure of genuine affection towards animals. As I see it, the appearance of the cat- and Tony's warmheated feelings - are an affirmation of the findings of the study.

Not the answer you're looking for? Browse other questions tagged analysis the-sopranos .

9
What is the significance of the painting of Tony Soprano in the generals uniform with the horse?
15
Was Tony the Boss of the family in the Sopranos pilot?
2
The Sopranos - Final Episode: Where is the proof that “Man In Members Only Jacket” is in fact credited by that name?
7
Why does the priest have a full bottle of wine in The Sopranos S01E05?
7
What is the significance of the cat in the movie “Gone Girl”?
10
Why are bialys so popular with Tony and crew in The Sopranos?
5
In the Sopranos, what does “…once they got Gary Cooper in touch with his feelings…” refer to?
5
Is there even a New Jersey Crime Family left at the end of Sopranos?