Why didn't Simran get into bogey from first door in DDLJ?

Off-late, many people on Facebook have been sharing this particular still from DDLJ. It seems funny or logical? Why didn't Simran get into bogey from first door? Does director want to show LOVE IS BLIND? Or director seized the opportunity for Simran to take the longer route (she's in Love, my boy) and thereby accomplish the feat of stretching the climax by 2-3 more minutes? 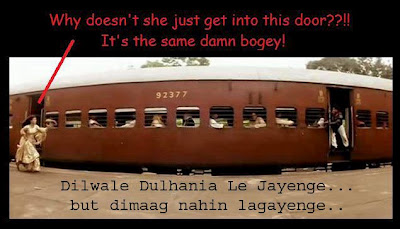 As noted, this is only speculation, but the woman is not running to catch a train, she is running to a man who looks to be waiting to help her aboard. Logically, she could have taken the first door, but if this is a romance, it would not be the romantic choice. I don't think this is an accident by the film-maker, but a confirmation of her intent and the intent of the film.

Personally I believe it is an unintentional error by the director. Now the viewers observes a lot more than a director thinks. But if I am to cover the director I would say, it really depends upon the way a person thinks. Generally ladies are said to like taking decision by heart rather than by brain and it is true. May be if this was SRK in place of Kajol as the runner, he might have entered by the last gate! I feel at that particular moment Simran was so eager to meet Raj in that situation, she did not think about it.

But if I see it logically, it is a foolish mistake by the makers. They should have made him stand in the last door of the bogey.

This is not an unintentional error by the makers of the film. There might be two reasons for this scene.

Who thinks that the director is mistaken is foolish or stupid? He wanted to show how the romance looks like. The scene came earlier in the movie when they were strangers and later when they are lovers. If she entered from the first gate the movie would have lost its eternality and a scene repeated more than 100 times and one of the best ending with the best music. It would have been dry, dull and free from romance.

Not the answer you're looking for? Browse other questions tagged plot-explanation dilwale-dulhania-le-jayenge .

2
Why didn't Ra's break into the Pit before?
7
Open door as the only possible way to get into the room
25
Why didn't Elizabeth get cursed?
3
How does Cole get from the First World War to 1996?
3
Why didn't Richard Kimble get shot?
2
Why didn't Timothy turn into a vampire?
1
Why Doctor Carmack didn't wait for Patricia while closing the door?
3
Why didn't the First Order track Leia?