What is the significance of Captain America Comics?

In Reign over Me 2007, it is shown that Johnson's character is reading the Captain America comic and he says to Charlie that he criticizes Nick Fury's character in it.

Once again, at elevator scene, Johnson saw a man is reading this comic.

What is the significance of it?

First a correction: The character that Alan Johnson (Don Cheadle) is commenting on is not Nick Fury.

The comic book Alan is reading is Captain America #117 which is the first appearance of Cap's future sidekick Sam Wilson aka The Falcon. The Falcon would go on to co-star and get co-billing in the comic from issue #134 through #222.

The premise of Reign Over Me is that Charlie Fineman (Adam Sandler) is suffering from PTSD due to the death of his family. He refuses to speak of them, he acts like he doesn't know any of his old friends, he evades his former in-laws when they appear. Charlie spends his days collecting old records, riding his scooter, playing Shadow of the Colossus, playing drums in a bar band, and repeatedly redoing his kitchen.

Charlie has regressed in many ways to an adolescent. When Alan, who was his college roommate for two years, first approaches him Charlie doesn't recognize him. Alan tries to help his old friend but Alan hates his job, his partners, and his responsibilities as husband and father and he begins to covet Charlie's freedom. Alan skips out on his family at all hours to hang out with Charlie and play video games or attend a Mel Brooks marathon. Anytime that Alan does try to bring up Charlie's family he is accused of being a spy for Charlie's in-laws and Charlie gets violent.

The scene above takes place in a therapist's office. Charlie has been there repeatedly but won't talk about anything. His therapist tells him that he needs to talk to somebody and as he exits her office the following exchange takes place:

ALAN: Charlie, wait a second. You didn't tell me that this guy's partner was black.

I mean, that makes this almost bearable.

Why do they gotta give him the green "V" plunge--?

I mean, that's-- Why'd they do that? That's kind of faggoty.

For reference this was the Falcon's first costume. 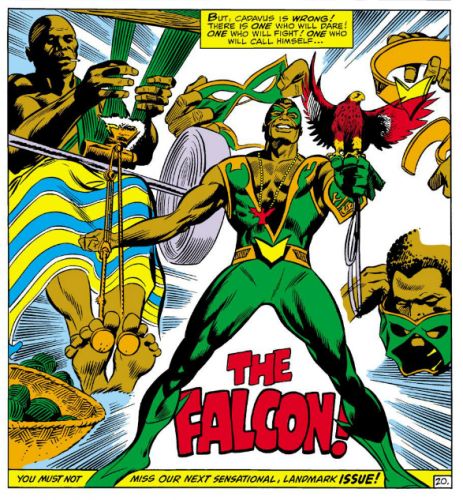 Charlie then breaks down and tells Alan about his family. When they leave Alan brings the comic book with him. Adding that to the dialogue above suggests that the comic book was Charlie's.

I believe what is suggested by this scene is that Alan is Charlie's sidekick. He's the Falcon to Charlie's Captain America. He's there to help him. He isn't someone to be feared or pushed away. Charlie opens up to Alan after this exchange. He has begun to trust someone.

The later appearance of a Captain America comic book (issue #238 just for those wondering) comes after we find out that Charlie has now moved and left no forwarding address. Alan is carrying a box of musical instruments into an elevator but is stopped by a mover. After signing off on delivery Alan looks up and sees the doorman of the building reading one of Charlie's comic books. Alan doesn't ask for it back.

Then again I could be wrong about all of this and it was just somebody wanting to show off their comic book collection.

Not the answer you're looking for? Browse other questions tagged plot-explanation reign-over-me .

14
Captain America Winter Soldier fight scene strangeness
18
Did Arya really see that the Thin Man was a wrongdoer?
2
What is the significance of Heywood muttering "Shut up, man" while Fat Ass continues to blubber at Hadley?
10
What was Dalton Russell's point in the movie Inside Man?
0
Why does this character in Black Rain do this?
1
Could the electric company employee have wrecked Hans Gruber's plan?
2
Is this a script mistake in Ant-Man and the Wasp movie?