What is a cautionary diamond?

In the movie The Counselor, the counselor is told by a diamond trader

This diamond is a cautionary stone.

I did a bit search online, could not find any information about what a cautionary diamond is.

A cautionary stone is a stone that gives warning. As the stone does not, in fact, give any specific advice, the name can be assumed to be poetic.

The term "cautionary stone" is not widely used.

A cautionary sign might be a yellow triangle with the silhouette of somebody falling. If person A does not understand the sign and slips on the wet floor behind the sign, the sign is still cautionary, as this property is about intent.

... any information about what a cautionary diamond is.

Some paths once chosen have no return route, and a certain unwanted outcome.

There are different versions of Cormac McCarthy's book:

There are also different cuts of the movie, depending on whether commercials are allowed for or the film is intended for movie theaters or pay TV, to be played straight through.

The scene for the diamond dealer is longer than it needs to be (like many scenes), but it is an important part of the film; it sets the stage for all that is to follow (unlike many scenes).

The scene clearly portrays the inability to differentiate between good and poor decisions, driven by greed and ignorance. To go to the deep end, to go out too far, yet not know how to swim.

The counselor flys from America to Amsterdam to purchase an antique (used) diamond from a dealer whom he probably doesn't know for his new wife. He seems driven by size and price. While obviously not wanting to buy a diamond that has something wrong with it he also doesn't want to fuss over details, which he guesses are unimportant, and appear ignorant.

Indeed the dealer tells him a story, unrelated to the purchase, that occupies at least 50% of the scene (this might have been cut in the version you saw). Shortly thereafter the counselor is convinced to accept the stone offered at the lower end of his unspoken price range; the cheaper of the two.

Throughout the film the counselor fumbles through things which are unclear to him, he dwells on trivialities and dismisses important information being offered (until it's all too obvious that it's life threatening). Then he questions if there can be a do-over, a way back from the journey already taken, a means to simply switch things around and obtain an outcome in his favor.

He is a lawyer, he doesn't want to seem uneducated, cheap, or foolish; yet somehow he manages to blend these qualities together - and loses everything. His dubious friends, his life savings, his wife, his business - all who's futures are as tenuous as the cracked diamond he purchases.

A diamond has two major portions, the crown on top that sparkles in the light for all to see; it is the smaller half. The pavilion is hidden beneath the crown reflecting light away from itself, no matter how it's cut.

The crack in the diamond that the councilor purchases is on the girdle, at a corner, where one of the prongs are to hold the stone in place. 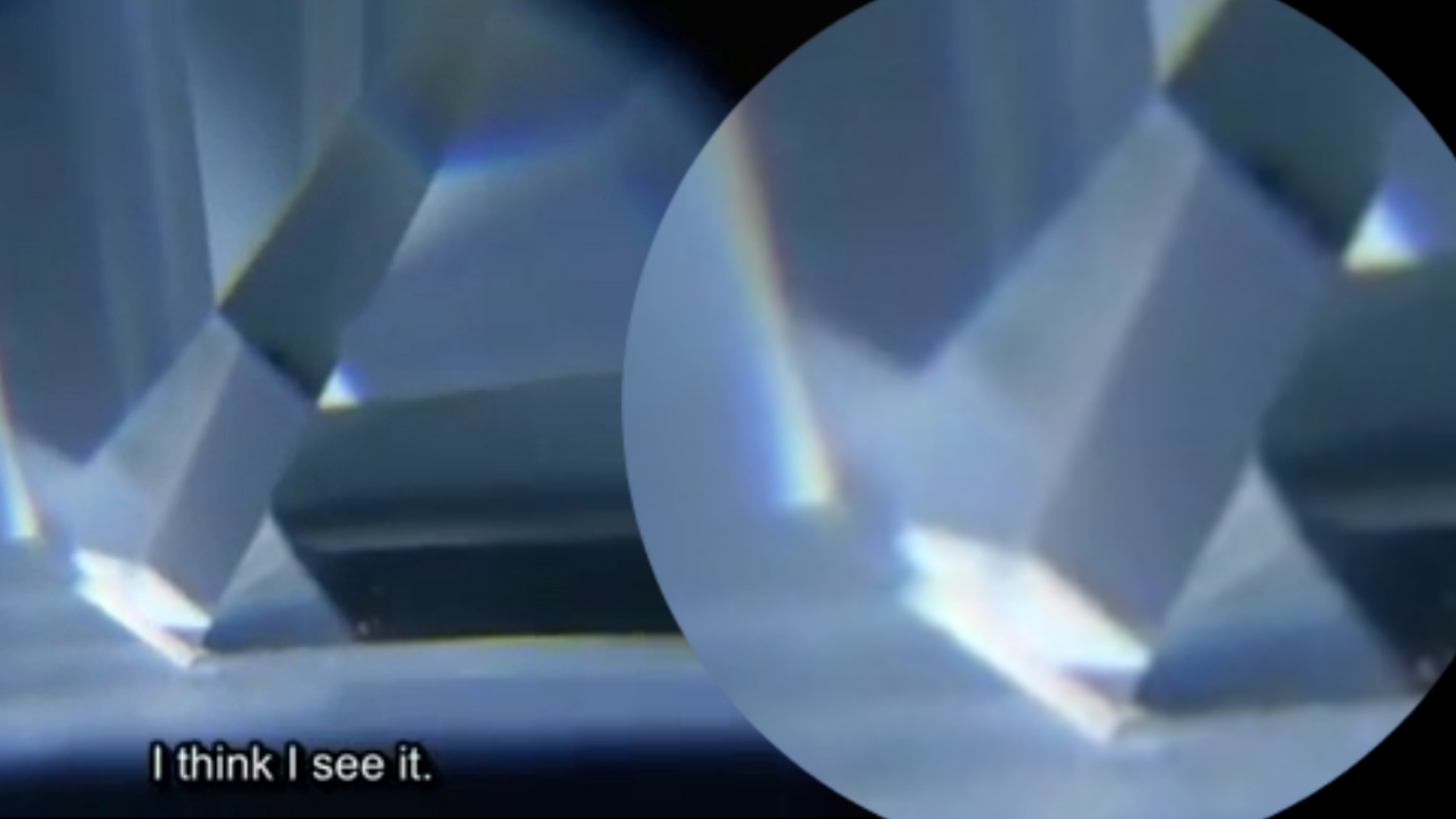 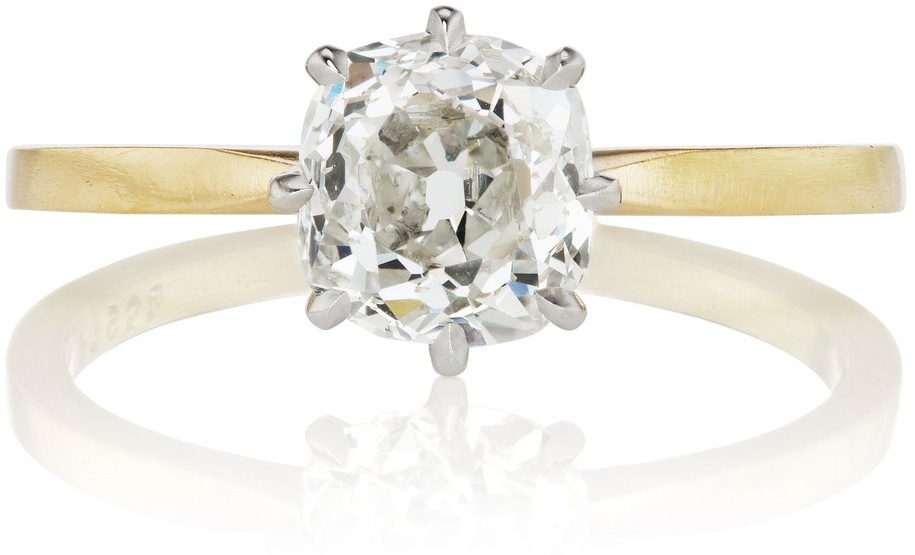 The script for that portion of the film:

Office of the diamond dealer.

COUNSELOR: I want her to have something that she would not be uncomfortable wearing. I don’t want to give her a diamond so big she’d be afraid to wear it.

DEALER: (Nodding, just the trace of a smile) She is probably more courageous than you imagine.

He takes the stone from the clip and sorts another one and puts it in the clip and looks at it through the loupe. He hands it to the counselor whom fixes it under the microscope and leans back. The counselor bends to study the stone. The dealer watches him.

COUNSELOR: Is this a Pillow?

DEALER: No. It’s an Asscher. Look at the corners.

DEALER: Let's put it in the grading box. The pillow has a slight arc to the sides. It is a modern version of the old-mine cut. Let's look at the color. Put it table-side down.

COUNSELOR: So you're looking through the pavilion?

COUNSELOR: It appears to be yellow.

DEALER: It's nitrogen that gives it the yellow. The colors start with D. A D-stone has no color.

COUNSELOR: So, what am I looking at?

[Note: As you can see from the chart in the link a yellow color noticed by a novice probably isn't an "H", more likely a "K", at least]

COUNSELOR: Is that still a good color?

DEALER: That's a very good color. The truth is that anything you can say about the diamond is in the nature of a flaw. A perfect diamond would be composed simply of light. Do you see the inclusion?

DEALER: It is small, what we would call a feather.

COUNSELOR: Yes. I think I see it. So, it is graded what?

COUNSELOR: (Chuckles) How many carats is it?

The dealer both shrugs and nods, then he picks up another stone with the four pronged tweezers and hands it to the counselor.

DEALER: Tell me what you see. Remember you're not looking for merit. This is a cynical business we seek only imperfection.

The counselor takes the tweezers and examines the five caret diamond with the loupe.

DEALER: This is a five caret stone. Tell me what you see.

COUNSELOR: The culet seems big. The crown and pavilion don't fit. The girdle comes out crooked.

[In the book, and director's cut] DEALER: (Raising his eyebrows) Yes. The crown and the pavilion may be well cut each in itself and yet stand alien to one another. Once the first facet is cut there can be no going back. What was meant to be a union remains forever untrue and we see a troubling truth in that the forms of our undertakings are complete at their beginnings. For good or for ill.

COUNSELOR: (Scoffs, and looks up) But there is no perfect diamond.

DEALER:The stones themselves have their own view of things. Let me show you. This is a cautionary stone. Although, I suppose every diamond is cautionary.

DEALER: Of course, why not?

COUNCILOR: It's not a small thing to wish for, however unattainable, to aspire to the stone's endless destiny. Isn't that the meaning of adornment?

DEALER: To enhance the beauty of the beloved is to acknowledge both her frailty, and the nobility of that frailty. We announce to the darkness that we will not be diminished by the brevity of our lives. That we will not thereby be made less. You will see.

Inclusions reaching or extending into a diamond from the outside are a concern for the integrity of the stone.

Feather (Ftr) - any break in a diamond. Feathers can present more of a durability issue than any other inclusion. One hard knock may make them larger. Feathers appear white or transparent.

Here's a lower cost diamond versus one three times the cost, see the difference? 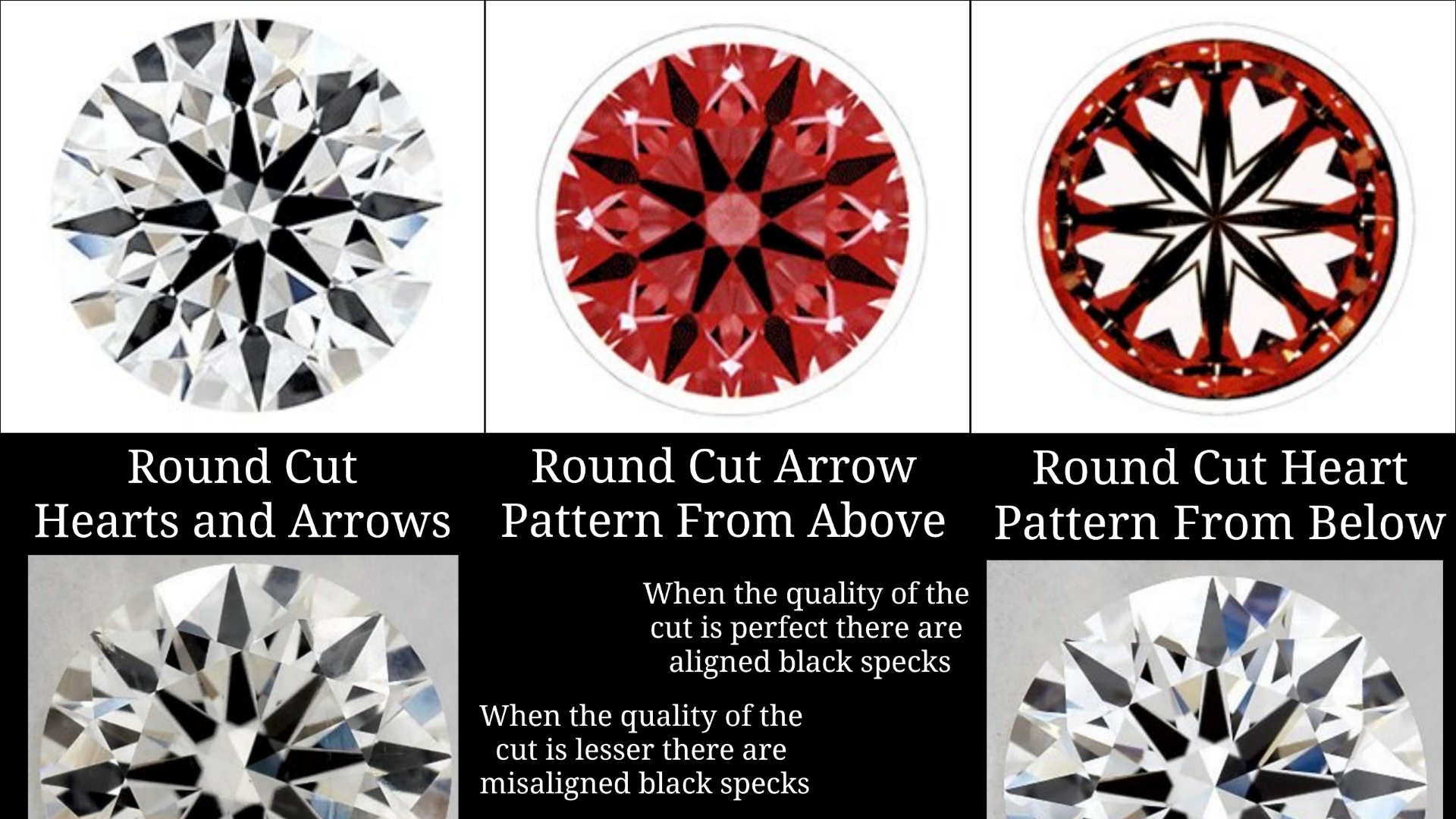 Not the answer you're looking for? Browse other questions tagged plot-explanation the-counselor .

17
Why did Lovett invite Rose aboard his search boat in Titanic?
1
Was the margin really paid by Barings? But Why?
5
Why does Malkina go to the church and try to confess?
29
Why did Rose throw the diamond necklace overboard?
4
Why didn't they just use the air strikes in the first place?
0
How does Morgan know so much personal information about strangers?
9
Training Day, the meaning of that snail story
3
How did Jackie knew about his father?