I saw an episode of family guy and they had a parody of a comic strip character that I did not recognize: 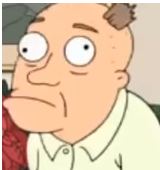 character family-guy
Share
Improve this question
edited May 25 '18 at 6:18

It is Opie (voiced by Mark Hentemann)

Opie is a mentally challenged ex-co-worker of Peter Griffin at the Pawtucket Brewery and ward of the state. He has won "Employee of the Month" at least twenty times and has been promoted ahead of Peter.

He has a mental retardation and he never really does anything. He sometimes tells Peter to stick his finger in mouth, only to bite it. He wears two different shoes on each foot. He once went for a haircut that went horribly awry. No one other than Angela seems to understand what he's saying. However, Peter has been shown to understand him in in some instances such as when he gets fired

It is later revealed that Opie speaks gibberish because he is constantly drunk.

Not the answer you're looking for? Browse other questions tagged character family-guy .

23
Why has Conway Twitty appeared as a distraction in Family Guy?
8
Family Guy ep 113 (Road to Germany) scene explanation
6
In Family Guy, who voiced GRR Martin?
5
How many dogs can talk in Family Guy
35
What is this record-destroying scene in Family Guy a reference to?
5
How is copyright handled when Family Guy reused old footage?
23
Meth dealer reference in Family Guy
4
Why is Will Ferrell's face pixelated in this Emmy Awards clip from Family Guy?