How does a rifle fire backwards?

In the movie, The American, Jack modifies a rifle for a female assassin; later he realises this rifle will be used to kill him so he modifies it further without telling the female assassin.

I understand Jack is a highly skilled gunsmith, but is it possible to reverse a rifle mechanism in such a dramatic way? 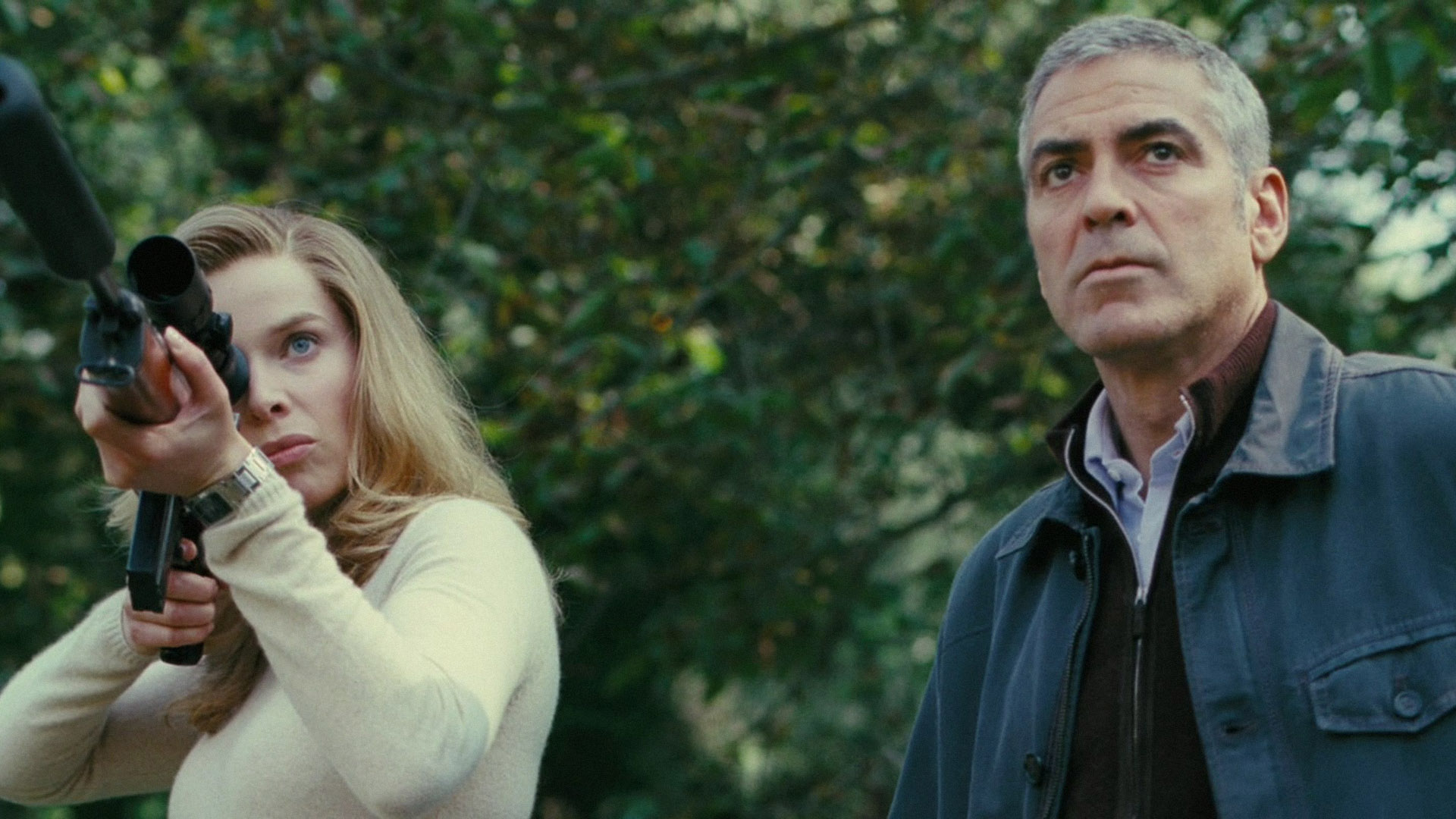 realism the-american
Share
Improve this question
edited May 26 '18 at 2:47

While I am not a gun expert, it would be safe to say that while normal rifle cannot be modified to shoot bullet backward, it is possible to modify the rifle to make it hurt the shooter. All you'd need is an obstructed barrel and powerful enough bullet: 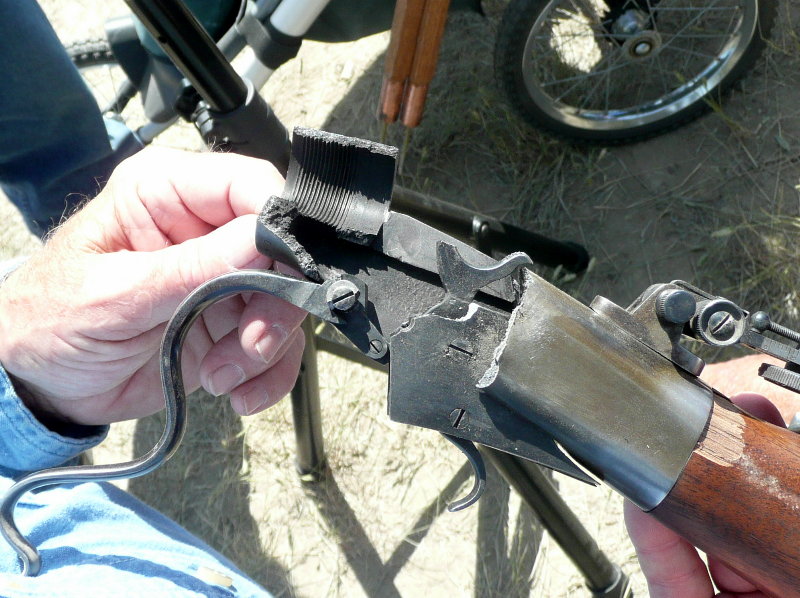 This is the photo from a real life accident - the shooter wasn't killed but seriously wounded.

Modifying a rifle to catastrophically fail is easy compared to the precision of manufacture and maintenance needed for it to work properly.

Excerpt of firearm malfunctions that pose immediate danger and that can be intentionally facilitated :

In extreme cases [of mechanical malfunctions], an overloaded round, blocked barrel, poor design and/or severely weakened breech can result in an explosive failure of the receiver, barrel, or other parts of the firearm.

A dangerous situation can occur when a chambered round fires when the firearm is out-of-battery (called an out-of-battery discharge). The cartridge casing is not sufficiently strong to contain the pressure of firing by itself; it relies on the walls of the chamber and the bolt face to help contain the pressure. When the firearm is out-of-battery, the round is not fully chambered, or the bolt face is not against the rear of the cartridge, and if the round is fired in this situation, the case will fail, causing high-pressure hot gasses, bits of burning powder, and fragments of the casing itself to be thrown at high-speed from the firearm. This can be a serious hazard to the operator of the firearm, and any bystanders.

A squib load (also squib round, squib, squib fire, insufficient discharge, incomplete discharge) is an extremely dangerous malfunction that happens when a fired projectile does not carry enough force and becomes stuck in the gun barrel instead of exiting it. In the case of semi-automatic or automatic weapons, this can cause subsequent rounds to impact the projectile obstructing the barrel, which can cause a catastrophic failure of the structural integrity of the firearm, posing a threat to the operator or bystanders. The bullet from a squib stuck in the barrel must never be cleared by subsequently attempting to fire a live or blank round into an obstructed barrel. Blank rounds use a type of powder different from that of other rounds, and generate much more pressure, which, combined with the presence of the projectile obstructing the barrel may cause the firearm to fail catastrophically.

My grandfather's bolt-action Springfield has a high enough serial number on it that it's presumed to have an improper heat treatment on the bolt. The company has warned those with these that the bolt may fail catastrophically. If there's one thing on a firearm that you don't want to fail, it's the thing that's between you and the four thousand joules of energy you're about to release.

That also happens to be the weapon on which I learned : do not kiss the scope with your eye socket. In the picture shown, all she has to do is pull the trigger to have a bad day. When actors fire blanks it doesn't really matter, but when you plan on sending 150 grains of lead downrange at 3,000 fps... you'd better know what you're doing.

I understand George Clooney is a highly skilled gunsmith, but is it possible to reverse a rifle mechanism in such a dramatic way?

Yes, but not to literally fire a bullet backwards. Instead they might be able to fire the guts of the gun into the shooter's face. With some guns that's plausible, but it turns out that's very difficult with the rifle used: the Ruger Mini-14.

Firing the bolt into the shooter's face?

Most rifles have a heavy cylinder of metal (the bolt) holding back an explosion (the powder charge) right in front of the shooter's face which unlocks with split second timing. With certain rifles if things go very wrong that bolt can wind up flying into the shooter's face. Those are rifles where you remove the bolt out the rear of the gun.

Rifles normally have multiple safety mechanisms and design elements preventing this from happening, but gunsmith may be able to disable these mechanisms and set up conditions so the gun will catastrophically fail.

This is just what is supposed to have happened with the Ross Rifle.

The Canadian WWI era Ross Rifle is widely considered to be one of the worst military rifles in history. There's a persistent story that if you assemble the Ross Rifle incorrectly the bolt will come flying out the back and smack the shooter in the face. Some professional gunsmiths decided to try and replicate that. The results are educational.

Here's a discussion and demonstration. The disassembled it incorrectly, disabled a few safety features, and fired it. You can see it in slo-mo at 13:40. And it still managed to stop the bolt! They discuss what stopped it at 14:30.

Even though they couldn't manage it, they were limiting themselves to simulate a situation that might reasonably come up in the field. It's totally plausible a malicious gunsmith could deliberately modify such a rifle to cause the bolt to fly out the back and kill the shooter... if the shooter didn't inspect the rifle too closely.

But not the rifle in The American.

I haven't seen The American, so I don't know what exactly happens, but the rifle in question is a Ruger Mini-14 that's been around since the 70s. Its basically a scaled down M1 Garand of WWII vintage. It's a semi-automatic, gas-operated, rotating-bolt rifle. It is extremely reliable.

As we said, in many rifles the bolt is designed to exit the rear of the gun, and the safeties to prevent this can be circumvented. But not the Ruger Mini-14.

The barrel and receiver are basically one big chunk of metal. The bolt comes out the front of the receiver for disassembly, as seen in this disassembly video. Behind the bolt is a very, very solid piece of metal.

I don't see how a gunsmith could modify the Ruger Mini-14 to have the bolt or anything else reliably fly into the shooter's fact without the shooter noticing the gun had been heavily modified.

What George Clooney's character could have done is cause the chamber to blow out through a combination of weakening the lugs keeping the bolt locked in place, a barrel obstruction to increase the pressure on the chamber (hidden by his custom suppressor), and using an hot round with more than the normal amount of gunpowder to create over pressure in the barrel.

When she fired the round the excessive gases from the hot round would be momentarily blocked by the barrel obstruction building up pressure in the chamber. Unlike a vintage 1860 repeater made of weaker bronze or brass, a modern rifle with modern safeties made with modern metals is very unlikely to shatter under pressure. Instead, the weakened bolt lugs would fail and the chamber pressure would vent backwards into the shooter's face.

Not in a dramatic "bullet through the eye socket" or "hunk of metal lodged in the brain" sort of way. It would send small parts, bits of sheered lugs, plus the shell casing, flying backwards. Probably not large enough or fast enough to be reliably fatal, though I wouldn't want to be anywhere near it. The bolt would remain inside the receiver.

Not unlike what happens to the Ross Rifle. And as you can see, the ballistic gel behind the rifle is hardly scratched. 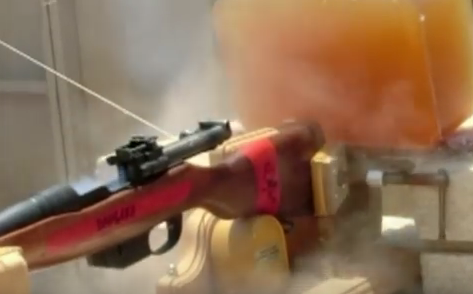 She'd certainly be in no condition to fight back should George Clooney's character decide to finish the job.

Disclaimer: I'm not a weapons-expert, this is just a guess based on the little I know about weapons.

While the other two answers concentrated on failure of the barrel, bolt or other parts, this can be actually achieved without any failure (apart from the fact that the fired bullet shouldn't leave the muzzle in whichever way).

A pretty common reloading-mechanism of modern assault-rifles and basically any other (semi-)automatic rifle is gas-operated reloading. In this mode a part of the explosive power of the charge used to propel the bullet is redirected to the mechanism to load the next bullet into the chamber and eject the old case. The best known rifles using this mechanism are the AK-47 and AR-15.

This reloading-mechanism has the side-effect of redirecting part of the energy of the combusting propelant back towards the operator. Normally this would be used to operated the reloading-mechanism, but it could surely be modified in a way that allows propelling a bullet in the direction of the shooter and seriously injuring or killing them.

EDIT: In this scenario, the original bullet (the one in the chamber) should be stopped by other means before leaving the barrel. The projectile that is supposed to hit the gunman is placed in the gastube and will be propelled by the energy that would normally be used to reload the gun (probably reinforced by a larger pipe and bigger port).

Not the answer you're looking for? Browse other questions tagged realism the-american .

15
Could a fire hose really support the weight of a falling man?
10
How closely does "First Blood" portray the contemporary attitude towards war veterans?
1
How much does Homer owe Moe?
1
Can Tyrell Wellick fire people on the spot?
5
How can an actor "fake" an American accent so convincingly?
0
In Rocky IV how does the Creed vs Drago fight go on?
2
How does the ending of "The Exorcism of Emily Rose" make sense?
12
If you pour buckets of gasoline on mattresses and shoot one pistol bullet at mattresses, will mattresses fire up?