Why did Thanos use the article "the" to refer to Ebony Maw?

On my 3rd rewatch of Avengers: Infinity War, I noticed something weird. When Thanos arrives on Titan and sees Doctor Strange, they have the following conversation.

Dr. Strange: Oh, you are much more of a Thanos.
Thanos: I believe the Maw is dead? This day extracts a heavy toll.

Ebony Maw, (the wizard wannabe-voldemort) is one of the children of Thanos. Why would Thanos say "I believe the Maw is dead" instead of the grammatically correct "I believe Maw is dead"?

"The" is used to refer to a family name like "The Simpsons" or species "The dinosaurs" but never to a person's name.

I think you've misheard the dialogue. That dialogue was

Thanos: I take it that Maw is dead? This day extracts a heavy toll.

Transcript source this, this and this and me

that sometimes sounds like the and that's probably where you got confused.

Yes, Ebony Maw is his full name and this is who Thanos was referring to.

This the scene in question

I had to listen to it several times, I personally believe that Thanos says "..the Maw..." rather than "...that Maw..."

When looking at some transcripts says "the" aswell...

Thanos: I take it the Maw is dead? This day extracts a heavy toll. Still, he accomplished his mission.

So it appears at least in internet transcribed versions of the script, Thanos says "The Maw" So we can at least go with that and get to answering your questions, why he said "the".

I will admit though, it could easily be 'that' as he talks quickly enough to make it for me not 100% certain which he said.

This is more of a linguistics question than anything specifically about movies, or the misconception of what is right or wrong.

The first thing to say is that natives don't make mistakes. (but may make errors)...even when they do. This is of course a somewhat nonintuitive thing, considering we learn in school that language should be one thing, while it rarely ever actually is in reality. (and when dealing in linguistics, often one must forget what one had learned in english class...)

So to answer your question of grammatical structure and its incorrectness...

Why is Thanos using "the Maw" instead of "I believe that Maw is dead" is that it's not incorrect, he's a native speaker. But this is riding on the coat tails of the discussion of what is natural language and what your english teacher taught you in school and isn't important (nor the actual point) to your questions.

Ebony Maw is a super smart telekinetic and one of Thanos' henchmen with a high position and role in his schemings, he has the reputation of never failing and is the herald of Thanos, spreading his will.

The imagery alone of his name should imply something bottomless, dark and voracious. 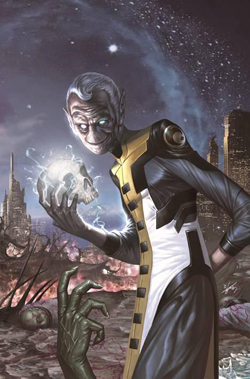 Which goes along with his image I think fairly well....Regardless the point I want to get at here and this example is simply the use of "The Maw" is that its intimidating and definite. Ebony is not any Maw..he's The Maw

Maw of course is a noun...and nouns in english require "determiners" definite articles (namely "the" in this case) in order to be used correctly.

Articles An article is a word that is used with a noun (as a standalone word or a prefix or suffix) to specify grammatical definiteness of the noun, and in some languages extending to volume or numerical scope. Examples of articles include a, an, and the.

Though colloquially in some regions it's common to call your friends by their last name in english without of course requiring any articles, it is not uncommon to hear someone ask with an article infront of someones name.

"Wait, are you talking about the Williams???"

When trying to ensure it is not just any random Williams, but a definite one. This is exactly why when talking about as in your example "The Simpsons" we mean to mean a very specific family, not just anyone.

There is a nice explanation about this in the linguistics SE.

With the final conclusion of:

So, whether using the definite article with people's names is "bad style" or not could be said to depend on the prescriptivist's view of what the definite article's role is: if its role is to add definiteness to a noun, then it's more likely to be considered incorrect to add it to nouns that are already definite by meaning, like people's names. If its role, however, is merely to indicate that a noun is definite, then it is more likely to be acceptable to use it with nouns that are already semantically definite.

To bring this all back around, assuming the sources are correct and Thanos says "The Maw" which it hears like, and appears to be transcribed as such, "The Maw" is simply Thanos' definite use and an intimidating nickname for Ebony Maw, and is most certainly perfectly fine english.

If however Thanos says "...that Maw...". Then again it's perfectly fine english, and is just a relative clause restricter.

I decided to see if some AI could help out trying to decipher what Thanos had said...using Deepspeech and mathematica, I recorded many times and ran it through the trained network...to many hilarious results, however the interesting part while doing this bit of research was that the AI regardless always recognised "the" and not "that" and that when you turn the volume up real high, its clear as day Thanos says 'the'.

Regardless here is one of the results, hope this clears some things up.

Not the answer you're looking for? Browse other questions tagged character marvel-cinematic-universe dialogue avengers-infinity-war .

61
Was Thanos really committed or just a hypocrite?
4
Why did Thanos get the soul stone?
16
Why didn't Thanos just use the reality stone?
15
How did Thanos know how to use this item?
6
Why did Thanos not assume Cull is dead?
2
Thor, God of Thunder, is easily imprisoned by Ebony Maw in Infinity War. Why is this?
6
Why is it different when Ebony Maw handles the tesseract and when Red Skull handles the tesseract?
3
Why didn't Doctor Strange use the Time Stone on Thanos?