Why do the walkers resurrect at the presence of a human?

I'm up to S3E03, of the walking dead, so I understand that everyone is infected, and when a person dies of any cause, it takes a time frame of 8 minutes to 8 hours for the dead person to rise back as a walker. What I don't understand is that they are only meant to come back after a certain time period, but when Rick for example ends up in that tank in the city (S1E01), there is a dead soldier who looked like he's been there for days, and way longer than 8 hours, but when Rick sits next to him in exhaustion, the dead guy wakes up. Why and how??? Another example is on the highway when Rick and the group are travelling, they break down, and corpses that have been there for weeks suddenly wake up. Some have actually woken up when they were supposed to, like Randal in S2E12 when Shane snaps his neck in the forest.

Why do some walkers wake up in the presence of a human and some wake up where the plot of the story has said they wake up?

but when Rick for example ends up in that tank in the city (S1E01), there is a dead soldier who looked like he's been there for days, and way longer than 8 hours, but when Rick sits next to him in exhaustion, the dead guy wakes up. Why and how???

It's uncertain when the solider actually died, but, he's definitely been dead for some time now, and had already converted into a walker by the time Rick had entered the tank.

Which is to say that, the soldier didn't coincidentally turn into a walker at the same moment Rick was down there. Instead, the soldier had died some time ago -- possibly by the scratches on his face/ear, or starvation -- had turned into a walker, and was just laying there. Then, once Rick disturbed the walker by trying to take his gun, it woke up.

And then, regarding the highway.. perhaps you're referring to S02E01? If so, those walkers weren't waking up, but instead, had been migrating as a huge group, and were simply spotted one at a time, until the entire group was noticed. 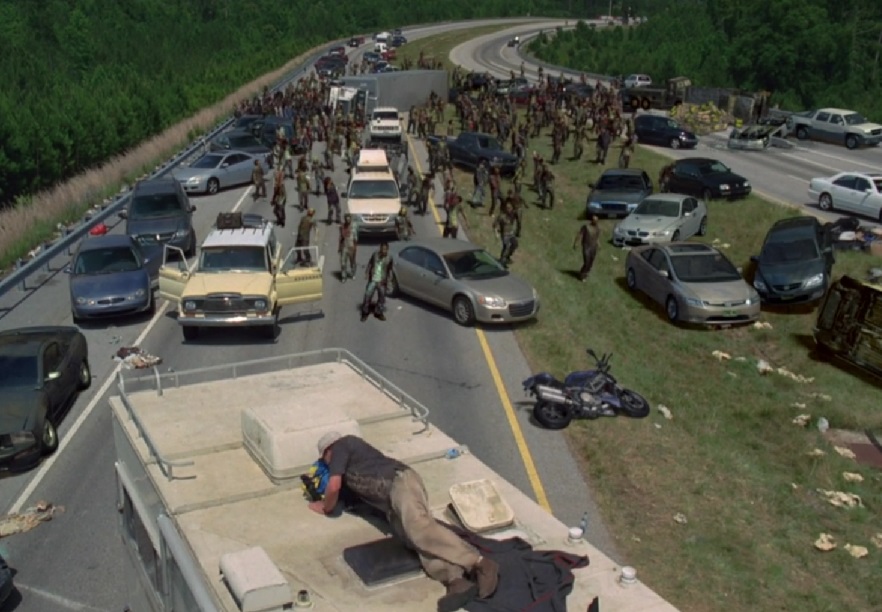 Why do some walkers wake up in the presence of a human and some wake up where the plot of the story has said they wake up?

..because some of them have already converted to walkers, whereas others are converting for the first time, from where they've just died.

An in universe explanation would be that when there is nothing to feed on then some walkers can become dormant as Charles mentioned about the walker in the tank in S1E1. Then when they are disturbed by someone or something they will then wake up.

An out of universe explanation is that it helps up the dramatic stakes to show one of the living characters seem to escape danger, only to be thrust back into it in it a moment of surprise.

15
How did Shane and Randall turn so fast?
12
As of S03E01, does walker blood have an effect on open orifices/wounds?
3
Why do they change the storyline?
4
Why don't humans become Walkers when eating other humans who are infected?
3
How did walking dead characters get cured?
36
Is the title 'The Walking Dead' referring to the main characters of the series?
23
Opening Scene of The Walking Dead?
4
Why does Negan kill this character in TWD S07E08?
6
How was this possible at the end of Say Yes?
2
Why did Shane see those visions when he died?