What's with Puerto Rico and Marie?

In Episode 3 of Breaking Bad Season 4 ("Open House"), Marie is wandering around a house looking at spoons. The realtor spots her and then the following conversation happens: 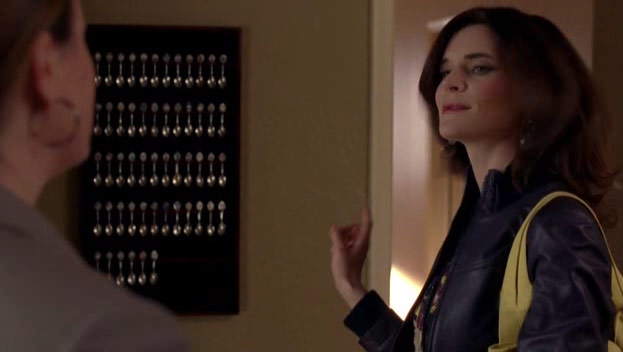 REALTOR: Hi. Can I answer any questions?
MARIE: Oh! Spoons...
REALTOR: Yes, the owner is quite the collector. Aren't they something? One for each of the 50 states.
MARIE: Well... Puerto Rico is technically a territory.
REALTOR: (surprised) Huh!
MARIE: You know, maybe they were thinking, "some day!".
Both laugh

I know it's an extremely minor thing, and the conversation itself is meaningless within the scope of the whole show, but can anyone explain to me what happened here?

What point is Marie making? Why is the Realtor surprised? I'm pretty sure everyone knows that Puerto Rico isn't a state(!), so what's going on?

I'm sure it is deliberate. The realtor comments that there is at least one commemorative spoon for each of the 50 states. Marie's response is not out of the blue, but instead indicates that she noticed one of the spoons was from Puerto Rico rather than from a state. Rather than just say, "hey, that one isn't from a state like you said they were," she is a bit more passive aggressive in her response (while still being playfully banal) -- she's in essence undermining the realtor's knowledge of the house owner's collection by pointing out that it's not technically a collection consisting solely of US state spoons.

In the larger sense, I might even argue it's not a meaningless conversation at all. It helps build up the story arc of Marie trying to deal with Hank's depression from being home-bound. He won't let her take care of him, and belittles her at every turn, especially when it comes to his own collections, so as she goes from house to house pretending to be different people, she can escape being Hank's wife for a little bit of time. She can be Tori or Charlotte or whatever other alias she chooses ... someone who knows about Puerto Rico or who has a different job ... and the kleptomania that goes along with it (from this house, she takes one of the spoons, correct? Maybe it's the one from Puerto Rico) shows how she wants to hold on to the remnants of these other imaginary lives.

23
Why is the connection between Hank and Marie and the colour purple?
4
What was Dan Wachsberger charged with (charge and evidence)?
5
Why did Hank not associate THE CAPN with 'Captain Cook'?
3
Hank and Gomez getting footage of robbery at warehouse
9
What exactly happened between Walt and Gretchen?
33
Why is Walt obsessed with Jesse?
5
How much money would Jack and his crew earn with the rest of methylamine?
5
What is up with Jesse and kids?
5
Why did Marie start wearing black?