Did Ben decide to donate his heart to Emily even before he met her? And how did he manage to give her an extension?

Did Ben decide to donate his heart to Emily even before he met her in Seven Pounds? I thought he was stalking her so he could give her an extension on the dues she was supposed to pay to the government. And how did he manage to give her an extension when he was not an IRS agent. He was impersonating his brother.

Did Ben decide to donate his heart to Emily even before he met her in Seven Pounds? I thought he was stalking her so he could give her an extension on the dues she was supposed to pay to the government.

No, she was just a candidate. In fact, it wasn't until nearly the end of the film that Ben really made up his mind.

In the first scene of the film, "Ben" is at the IRS and is searching the database for various people, going off a list. As you can see, Emily's name is present. 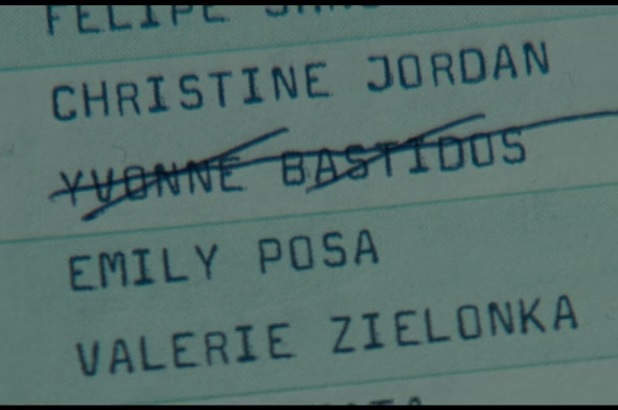 This is Ben's preliminary list in determining who gets his heart, and he's using their federal tax delinquency as an excuse to have direct and personal conversations with them; to gauge their character.

Only after Ben has a conversation with someone does he then decide if they're worthy or not of one of his organs/tissues.

And, by the time Ben leaves Emily's house for the first time, he's decided to stop looking for someone else -- that she's the one. But then, a few weeks later, due to an accident Emily has, Ben becomes slightly hesitant in giving her his heart.

Since Emily had fainted just after walking her dog one day, her priority status was upgraded to 1b and she was given a pager. Because of this, even though Emily only had at most 6 weeks left to live, Ben started wondering if he really needed to give Emily his heart, or, if she might be able to get one through the hospital instead.

Some time goes by, the two of them develop feelings for each other, and after they share an intimate night together, since Ben has fallen in love with Emily, he comes to the realization that he needs to make a definitive decision -- either commit to their relationship and hope Emily gets a heart, or, go ahead and give her his heart right then and there.

So, he literally sprints to the hospital to meet Emily's doctor, only to be informed that Emily's chances of receiving a heart is 3-5% (due to her rare blood type).

It's only until now that Ben decides he's actually going to give Emily his heart.

For the sake of not prolonging an ill-fated love, and because time is of the essence for Emily's condition, Ben immediately proceeds to call his friend Dan, who is Ben's living executor, to carry on the plans.

And how did he manage to give her an extension when he was not an IRS agent. He was impersonating his brother.

Correct. As hinted at the beginning of this response, "Ben" isn't really Ben.. Will Smith's character's name is actually Tim.

Tim was able to impersonate his [IRS agent] brother, Ben, by stealing his credentials, which in turn allowed him access into the IRS building and to his computer. In the case of Emily, I believe Tim did actually issue her an extension, by going to the IRS office again and updating Emily's record.

It's most likely the case that -- once Tim applied the extension to Emily's file [using Ben's credentials], Ben was asked about it at work, which then led to them auditing his most recent queries. Ben, of course though, didn't want to tell them that his brother had stolen his credentials and was impersonating him, so, he made up some line of reasoning to cover for Tim; i.e., for issuing Ms. Rosa the extension.

It's after this that Ben confronts Tim about impersonating him, and for using his computer. Granted, although Ben does mention the inquiries Tim made, he doesn't mention Emily's extension. However!, IMO, Ben knew to go to Emily's house instead of everyone else that Tim had searched for specifically because Tim had applied an extension only to Emily's account, thus making her stand out.

But, it's also possible that Ben was going to everyone that Tim searched for, looking for Tim's car, and perhaps started with the most recently searched for person -- Emily.

6
What exactly does Dan in "Seven Pounds" do to help Will Smith? What was the plan?

92
What really happened in Memento?
4
How did Cobb manage to go to sleep and dream to save Saito after Mal's death?
4
How did Chief Hopper and Joyce Byers decide where to go when seeking Will?
9
How did Voldemort, Bellatrix, and Lucius manage to keep their wands?
1
How does Nikita give out her captive location in episode Cat and Mouse?
2
Why does Jarda attack Jason in The Bourne Supremacy after telling him where his car keys are and even suggesting how to escape?
2
How did Corinne's car end up abandoned, and how did her earring end up on the backseat?
2
How did the Ghost locate Luis and his friends' workplace?