What would be the equivalent of the carnivorous island?

Towards the end of the movie Life Of Pi, we are given a new vision of the events depicted in the story. The writer that interviews the main character explains that the Zebra, Orang-Utan, Hyena, and Tiger from the main story represent the Buddhist Sailor, Pi's mother, the Cook, and Pi's dark (murderous) side.

If we assume this logic applies to all the events between the sunk of the ship, and Pi's rescue on Mexico shores; there is an episode left unexplained. This is the part when Pi discovers an island made of floating trees, whose waters dissolve animals at night.

What could represent this event in the alternate vision of the story?
What could be the meaning of this short episode?

It is all the more disturbing since this is the most "hard to believe" part in the first version of Pi's story. 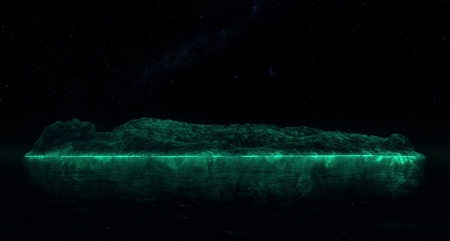 OK, assuming the 2nd story is the true one, then we analyze the symbolism in the first story and accept the assignment of the animals to people given by the author/narrator, which concludes with "...and you are the tiger."

We know that Pi (tiger) killed (and possibly ate) the cook (hyena). We also know that Pi coexisted with the tiger, as though Pi and the tiger are not one & the same - demonstrating Pi's inner struggle - peaceful vegetarian vs killer/carnivore/(cannibal). He "needed the tiger in order to survive". But he needed to tame it to keep himself alive.

The island (cook) is teeming with life. The thousands of meercats represent the life-giving flesh of the island. But we see it's shape is that of a sarcophagus, or mummy, or dead man ... the cook. Pi eats the roots and seeds while Richard Parker eats the flesh of the island.

But ultimately, Pi sees that the dark side of this will eventually consume him and he must move on. (perhaps the dark side of the island is the decaying, rotting flesh of the cook.) But before he does, he stuffs himself "til his stomach can hold no more" and gathers as many meercats as he can as "sustenance for Richard Parker".

Pi has eaten the cook.

“Many readers assume it is something deeply symbolic they just don’t get, or it’s an hallucination –they need a reason to prop up the fiction.”

But in his own words “religion goes beyond the confines of the reasonable”.

my original answer:
IMHO the island represented how Pi's view of life had changed after he killed the cook:

According to the insurance guys, there was no such island in reality, suggesting it was a symbol of something, not a real island.

Pi found the island after Richard Parker killed the hyena, which symbolizes Pi killing the cook (and shows that the ordeal at sea had changed Pi forever -- the innocence of his youth was gone).

After finding human teeth in a tree he is sitting in, Pi realizes that the island slowly "digested" someone who tried to stay there before -- symbolizing Pi realizing what will happen if he gets too bogged down in thinking about how he killed the cook (or about other horrors in life).

Then Pi decides that instead of staying on the island (which would represent dwelling on what he did or on life's horrors) he's going to get back on the raft and keep going (which represents moving on with his life).

Here is a quote from an interview with Yann Martel, 'Life of Pi' Author (Empasis mine):

[...] The island, ah, the island. The most frequently asked question: What does the island mean? It means what you choose to see in it. My narrative strategy in writting this book was to write a story that was progressively harder to believe. Will you believe that a boy could survive with a tiger? Yes? Good. Will you believe that the boy could go blind, the tiger could go blind and they could meet another blind man in another lifeboat in the middle of the Pacific? Yes? Great. Now will you believe in this crazy carnivorous island? I figure most readers will not believe it. Their suspension of disbelief will break down and readers will start making excuses for Pi: He's starving and hallucinating. In other words, reason will kick in. That's fine with me. But I hope that when readers get to Part Three of the novel and read the other story, the one without animals, that their revulsion at that story will be such that they, like the investigators, will choose the first story as the BETTER story. But I wanted that better story to have something unbelievable about it. I wanted it to get beyond the reasonable and the plausible. BECAUSE every great thing in life — be it religion, love, any ideal — has an element of the unreasonable to it. We are not computers. We need the pull of the unreasonable to get us through life. The island represents that unreasonable element in the first story.

The island, a place for rest and regaining strength for Pi after his lost all his hope (or rationality), has been suggested by some Taiwanese blogger as being a symbol of the difficult moment that he consumed the remaining of his own MOTHER. A few clues suggested this link:

In the second story told to the Japanese pari of investigators, Pi said that he dispose his mother in the ocean after she was killed. But do remember that this was just a second version of STORY- it may not be entirely true neither.

So basically the film has three layers of stories.

OF course, Ang Lee deliberately do not tell which is TRUE. This is, after all, a film about story-telling and faith.

I think that the island is a mental state that pi is in. Looking down at his feet he would see bones of his victims in the boat. I think that maybe he realises what he is doing especially when he sees the human tooth. I also think he stays on the raft because of the horrors on the boat ie: drying corpse. He probably ate at night because he couldn't really see what he was doing. He probably had a reality check and decided that he would keep on surviving and not be bogged down in what he couldn't change.

The shot taken where Pi sees the rotting/dissolving fish in the pond below, it symbolizes an eye..does it mean that Pi sees the rot in the cook's body?

I actually thought that the island looked like a woman. But I need to take a look again. So it's quite possible that Pi eats his own mother in order to survive and then cannot bear it and leaves the island. I think this because, in the end, when he is famished, he has hallucinations where he only sees his mom's face amongst other things and not that of his father or brother.

I haven't read the book. So I might have missed out on some details.

Not the answer you're looking for? Browse other questions tagged analysis life-of-pi .

0
A possible interpretation of that island in movie

46
What is the meaning of Teddy's last dialogue in Shutter Island?
4
How did Richard Parker manage to get the goat inside the cage?
18
How did Hugo not lose weight while on the island?
7
Why couldn't the black smoke fly away from the island?
5
What would happen if they pushed 'YES' in Cube Zero?
6
The two million never got to the island. What does this phrase mean?
8
Meaning of the title "Shutter Island"
12
What would an observer see when someone goes through the Turnstile in Tenet?