Why didn't Dr Strange use his sling-ring?

As answered within this question, sling rings have no limit to their range.

We know Strange has his sling ring, as their fight on Titan shows Spiderman utilising the portals to attack Thanos.

Why did Strange not use this to escape, at any time?

Even before Strange looked into the future (and possibly accepted his fate), there was a large plot point about Stark/Parker/Strange being trapped on Thanos' ship, with no means of escape, and being forced to make a crash landing. Surely the sling-ring should make this a needless risk?

Was there any explanation over Strange's selective use of this incredibly powerful tool, which we know to be A: in his possession and B: working?

There is even a scene earlier in the movie wherein Black Dwarf has his arm cut off below the elbow by strategic use of a sling-ring portal. Considering their entire end game is to get Thanos' gauntlet off his arm, this would have been a good repeat strategy!

His sling ring seems heavily under-utilised; is there any stated reason for this?

We know Strange has his sling ring, as their fight on Titan shows Spiderman utilising the portals to attack Thanos.

Correct.. Dr. Strange does have his sling ring when fighting Thanos on Titan, and this is confirmed by Strange manifesting ports for Spider-Man, Star-Lord and Mantis at various times. 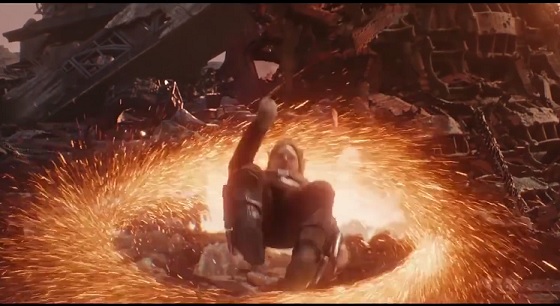 Most importantly though, towards the end of the fight there are a few closeups of Dr. Strange, and his sling ring is clearly being worn on his left hand.

Why did Strange not use this to escape, at any time?

Because that would have been anti-plan.

First off, it was completely and entirely possible for Dr. Strange to port both himself and his companions away from Thanos and back to Earth at any point. Doing so, however, would have defeated the purpose of them going to Titan in the first place [instead of heading back to Earth as Strange had initially suggested].

At this point in the film, Thanos already has four of the six infinity stones, and the last two are on Earth (well, one is with Strange, but he was just on Earth). Knowing this, Stark and Strange anticipate Thanos eventually going to Earth, and so, they decide to intercept him on Titan instead, as to avoid killing innocent people and destroying cities.

Even after their failed attempt in removing the gauntlet, and despite Thanos hurdling a moon at Strange/Stark/Spider-Man/etc., all of them still stay around and keep attacking Thanos. In fact, there's never a comment from anyone about wanting to leave. That being said, none of them wanted to leave, and porting back to Earth (or anywhere else) wasn't even a consideration.

Even before Strange looked into the future (and possibly accepted his fate), there was a large plot point about Stark/Parker/Strange being trapped on Thanos' Qship, with no means of escape, and being forced to make a crash landing. Surely the sling-ring should make this a needless risk?

They were never trapped, per se, and the crash landing was impromptu.

After Stark and Parker save Dr. Strange, they immediately have a conversation about how to proceed. Initially, Dr. Strange proposes that they turn the ship around and head back to Earth; Stark on the other hand suggests to let the ship continue its course to Titan and fight Thanos there.

There was a moment when Dr. Strange asked Stark if he could fly the ship, but Stark neither confirmed nor denied that he could. Instead of answering Strange's question, Tony responds by proposing his own plan.

And then, it was only once they began entering Titan's atmosphere that the ship started losing stability/integrity, at which point Stark and Parker together attempt to manually steer, only to crash into stuff along the way down. This is what caused the ship to be in such dire condition upon landing.

Since Dr. Strange has never been to Titan, they had to take the ship to get there, which included enduring the rough landing.

There is even a scene earlier in the movie wherein Black Dwarf has his arm cut off below the elbow by strategic use of a sling-ring portal. Considering their entire end game is to get Thanos' gauntlet off his arm, this would have been a good repeat strategy!

This port was created by Wong, not Strange, so there's no reason for Strange to think of it when fighting Thanos (w.r.t. the previous event with Black Dwarf). Also, Wong was just closing the port after Black Dwarf had already gone through it, and not timing the port to intentionally slice his arm off (Black Dwarf was reaching forward when running back to the port).

It does sound like a good strategy though, since all they have to do is remove the gauntlet (i.e., chop off his arm)..

His sling ring seems heavily under-utilised; is there any stated reason for this?

Note: As of now, we have no official information regarding why Dr. Strange didn't use his sling ring to escape Thanos.

My Theory: As Master of Msytic Arts, he has shown his intellect in several instances like his fight/deal with Dormammu.

And as we know from Infinity War, he has seen roughly 14 million future possibilities, where they win in only one particular scenario

It can be assumed that Dr. Strange was working according to the plan he saw them make in the possibility where they defeat Thanos.

This will all be cleared in the next Avengers movie.

In a Q&A with Collider, Joe and Anthony Russo answered a question regarding Doctor Strange in Avengers: Infinity War.

Audience member: Why couldn't Doctor Strange use the Sling Ring on the Donut to get them back home?

Joe: Why couldn't he use it to get back home? Because, uh, he doesn't want to get them back home.

It would have been pointless and dangerous

While Dr. Strange can teleport with unlimited range, the answer to my question shows that he needs to have first seen the place in order to port there.

That leaves exactly 2 planets open, as we've only seen Strange on Earth and Titan.

And Strange doesn't gain anything by porting to Earth. At this point, Thanos has stated respect for Tony Stark and the other warriors who opposed him, and is willing to spare their lives for a decent enough bargain. Another of Strange's tricks could have diminished any possibility for mercy.

Plus, Strange has already seen Thanos teleport out of thin air right to their location on Titan, so he knows that running back to Earth buys zero time.

I believe the answer is the portals the Sling Ring opens are limited in range, otherwise, the Space Stone and Bifrost are useless, just learn magic.

You'll notice Dr.Strange asks Tony if he can get them home on the way to Titan, why not just open a portal back to Earth? Strange can clearly open portals on Titan.

There are 3 ways (we know of) of moving long distances in the MCU at will without a vehicle: Bifrost, Space Stone and Sling Ring, and each have a drawback.

Bifrost can move many people across great distances seemingly anywhere in the universe but it is not instantaneous. As we see with the Hulk traveling in Infinity War and Thor/Loki in Ragnarok time does pass in the Bifrost. Sling Ring and Space Stone travel are instantaneous.

The Space Stone creates brief, unstable portals to travel anywhere in the universe. You can move yourself and a few friends. Sustaining a portal with the stone requires an external mechanism like the one Selvig creates in Avengers 1. This is why Hela is bent on obtaining the Bifrost Sword in Ragnarok when she already has access to the Tesseract, she needs to move an army around and the brief portals the Space Stone conjures won't cut it.

Sling Ring travel must only be for "short" distances (if you want to call planet-wide "short"). We only ever see people use it this way so far, Strange doesn't seem to be able to port them back to Earth from the ship or to get support from other heroes from Earth.

If he could use it to go from Titan to Earth etc the Space Stone would be worthless compared to simply learning one of the most basic magic spells.

This gets admittedly shaky, but I don't think this contradicts what Mordo told Strange:

MORDO: Mastery of the sling ring is essential to the mystic arts. They allow us to travel throughout the multiverse. All you need to do is the focus. Visualize. See the destination in your mind. .. Imagine every detail. The clearer the picture, the quicker, and easier, the gateway will come.

In theory, another dimension is right next to us vibrating at a different frequency (or perhaps it is a matter of scale as we see in Ant-Man and the giant germ looking things in Dormammu's "dark dimension"). The multiverse isn't far away, it's all around us, so stepping into another one is actually closer in some ways than going to another galaxy depending on how you look at it. So what Mordo said is true, in the words of another famous space wizard, "from a certain point of view". You just can't go as far as may have been implied.

Escaping Thanos' ship instead of being forced to make a crash landing was the only plot hole I initially saw here. Except it's not.

He cannot abandon Stark and Parker. Strange asks the unanswered question: if Stark can fly the ship. He can't leave until he knows they'll be alright. If he opened a portal they would've tried to stop him, and I think whoever opens the portal has to go last, and there's no way they would go first.

And I have to assume he was unable or unwilling to throw them both through a portal against their will, or open one to jump through himself and possibly get webbed or zapped as he tries.

There's an outright conflict of interest during this scene and everyone is a little froggy. There's not much time to weigh all the options, as soon afterwards they begin their descent. At that point he's in for the ride and waiting for something catastrophic to happen in case he has to save his saviors... call it a professional courtesy.

18
Why didn't Dr. Strange create a portal to cut off Thanos' hand?
8
What is the range of Dr. Strange's portal spell?