How did Thor guess the access code to the Quinjet?

In Thor: Ragnarok, there's a scene when Thor is trying to access the Quinjet, but everything he tries ends up in an "Access Denied" response from the security system. Then he gets mad at Tony stark, and tries the "Pointbreak" keyword, which unlocks the system.

What did that passphrase mean, and how did Thor know that? I've watched most of the series and can't remember something like this.

Because it's a running joke from Tony's side for Thor. He used it as a nickname for Thor in The Avengers:

Tony: No hard feelings, Point Break, you got a mean swing.

So it's just a continuation of that joke.

And you might already know Point Break (1991), where Patrick Swayze's character has similarly long golden hair: 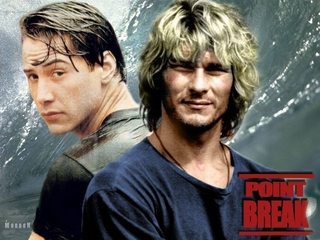 Which is little similar to Thor's golden locks in The Avengers. Thus, Thor recalls Tony's joke and is able to guess the right password.

When Thor enters the Quinjet he has a hard time gaining access to its controls. The ship asks for voice recognition input and he uses many different names including, “Thor,” “Thor, Son of Odin,” “God of Thunder,” and “Strongest Avenger.” However, the name that ultimately gains him access is “Point Break.”

Point Break is the name Tony Stark gave Thor in the first Avengers film because of his resemblance to Patrick Swayze in the 1991 film, Point Break. In this surfer-robber ’90s movie, Swayze sports long luscious blonde hair, much like the God of Thunder’s flowing locks, and Stark is more than happy to point this out from time to time.

No wonder Thor says, “Damn you Stark” as soon as he gains access to the Quinjet.

1
Did Tony post guys outside of Happy's hospital room and have them require badges to get in?
2
Who shot Lt. Smith (Wesley Snipes) in the back?
10
How was Hulk able to speak fluently in Thor Ragnarok?
4
The equation between Thor and Loki?
8
Why was Thor in a cage and how did he get there?
6
Does Ford have Arnold's access code?
38
How did Thor get into Wakanda?
6
How did Thor get healed?