What does this Oompa Loompa whisper to Wonka in the T.V. Room?

In Willy Wonka and the Chocolate Factory, what does the Oompa Loompa whisper to Wonka before he takes Mike T.V. (inside his Mother's Purse) to the Taffy Pulling Room? 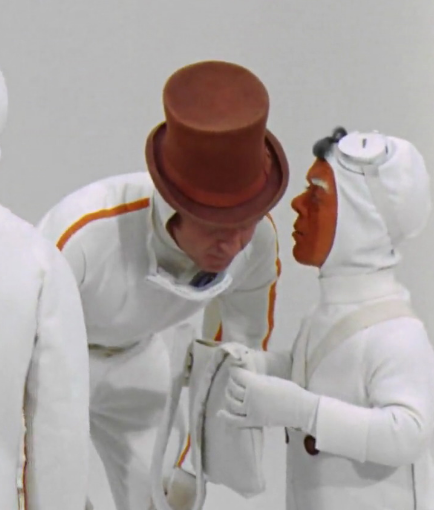 In Willy Wonka and the Chocolate Factory, what does the Oompa Loompa whisper to Wonka before he takes Mike T.V. (inside his Mother's Purse) to the Taffy Pulling Room?

The Oompa Loompa was whispering -- should something go wrong when restoring Mike, will I get in trouble?

Just after Mike is shrunk and placed in his mom's purse, Wonka explains that Mike can [theoretically] be restored by using the Taffy stretching machine.

WONKA: (continuous) Well, fortunately small boys are extremely springy and elastic, so I think we'll put him in my special taffy-pulling machine. That should do the trick.

WONKA: (to an Oompa Loompa) To the taffy-pulling room. You'll find the boy in his mother's purse. But be extremely careful.

WONKA: (to the Oompa Loompa) No, no, I won't hold you responsible.

The Oompa Loompa whispered this to avoid upsetting Mike's mom, but it would seem Wonka's non-discreet response had that effect anyway, as Mike's mom then faints.

Not the answer you're looking for? Browse other questions tagged dialogue willy-wonka-and-chocolate-factory .

3
What happened to Mrs. Teavee?