In Pee Wee's Big Adventure, did Simone go to the wrong Paris?

I just watched Pee Wee's Big Adventure for the first time in many years, and something struck me as peculiar:
Pee Wee meets Simone at a dinosaur tourist attraction which is (at least in real life) in California. Simone shares her dream with Pee Wee that she wants to visit Paris.

Later, they run into each other again, at a bus station in San Antonio (deep in the heart of Texas). She's about to get on a bus to realize her dreams and go to Paris. But why on earth is she at a bus station in Texas going to France?
I wonder, was this a deliberate subtle joke that Simone was not so bright and actually on her way to Paris, Texas?

she is at the Drive-in with her new French boyfriend

so maybe she eventually did make it to her final destination or maybe this was just another crazy coincidence.

But is there anywhere where the writers may have confirmed that she was going to the wrong Paris at that point in the movie?

Edit: I just noticed in the wikipedia page for the dinosaur attraction that they were also featured in the movie Paris, Texas. So could it have been an even-more-direct reference?

When Simone and Pee Wee first meet, they are indeed at the dinosaur attraction. During their conversation, Simone is talking to Pee Wee about her dreams of visiting Paris, France:

My dream is to live in the city of eternal love...Paris, France.

Simone: Pee-wee, I'm on my way to Paris. Andy and I had a fight after you left. You were right, Pee-wee. I'm making my wish come true. I'm off to Paris!

At the end of the film, Simone has returned from Paris, France. She has a stereotypical French boyfriend named Pierre who is dressed in "French" attire. 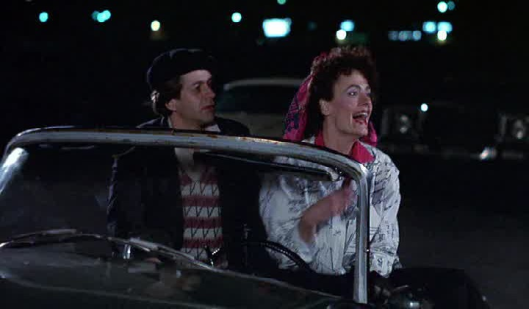 I'm sure that Simone's boyfriend would have been somewhat different if she had met him in Paris, Texas.

While the observation of the dinosaur attraction being featured in both films is very interesting (especially because the other film is titled Paris, Texas), I am fairly confident that this is purely coincidental. Simone is portrayed as somewhat naive, but she would probably be able to tell the difference between Paris, Texas and Paris, France.

Not the answer you're looking for? Browse other questions tagged plot-explanation pee-wees-big-adventure .

6
What wrong did Tobin Frost do?
6
In Pee-Wee's Big Adventure, Did Pee-Wee Use the Boomerang Bow-Tie?
8
Why did the convict stop his car to pick up Pee Wee?
5
Why did the Colombian deal go wrong in Scarface?
6
How did the wrong dog get in the cage?
16
Why did the bullet catch go wrong in The Prestige?
3
Why did employees get fired before the big recession?
4
Was Fritz a Nazi all along?