What does Ash drink in Alien Director's cut?

I was watching the Alien director's cut and noticed that Ash the science officer, who is revealed to be an android later in the movie, in one of the scenes is shown to be drinking what appears to be milk. Seeing it was the director's cut, was that scene left in deliberately? Or was the character drinking the white blood-like fluid which comes out of all the android models shown in Alien movies?

Here is a nice interview with a large portion of the original filmmakers, in which they discuss how Ash is drinking milk.

From what I can ascertain, the androids in this film series can indeed drink fluids - but in this case it seems to be a precursor for a later gag in which Ash sweats a white fluid in an approximation of an 'android orgasm'.

From an interview with Ridley Scott:

Interviewer: Just before assaulting Ripley, the robot starts to sweat....

Ridley Scott: This is one of the humorous touches in the film. At the end of the previous scene, you've seen it drink milk, or some liquid with which it feeds its circuits. The drop that appears on its forehead is an alarm signal, a way of warning the audience that something is going wrong .... and I always thought that it was interesting that er, do humanoids have sexual urges, what would be nice is that this is the closest he gets to sexual relationhsips (smirk)

I have always taken from the films that Ash is drinking Android blood, or a fluid needed to support their systems. It is a consumable bio fluid that needs to be replenished as part of their regular maintenance.

We know that their blood is white as seen in Alien, Aliens and Prometheus. 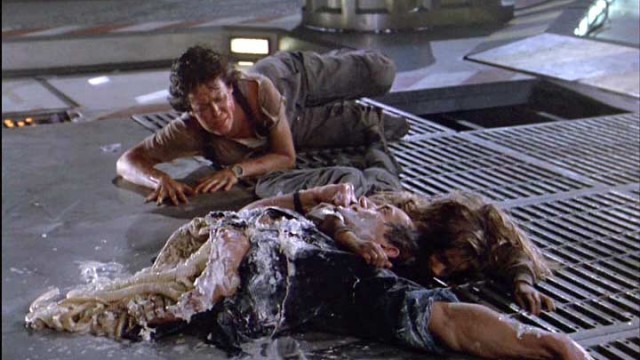 The only possible exception is in Aliens 3, when actor Lance Henrickson makes an appearance near the end. When he is injured his blood looks red. Could he be a real human or have Androids evolved? I don't know but later in Aliens Resurrection the female android again is revealed to have white blood (if I remember correctly).

48
Director's Cut, Editor's Cut, Theatrical Cut. What do these mean?
7
Is there a director's cut of Jackie Brown?
5
Does there exist a full, "Director's Cut" version of Fast Times at Ridgemont High?
7
Do extended & director's cut versions get released in theatres?
23
Ash in Alien cannot lie to humans, Yes?
9
Was there a scene in Honey I Shrunk the Kids where Nick talked about the size of his database?
2
What are the differences between the Theatrical Release Cut and the Director's Cut of Midsommar?