Why doesn't the regeneration power make the deformed face of Jason like before in Jason X?

In Jason X, it was told that Jason has miraculous regeneration abilities.

Scientist/Researcher: His unique ability to regenerate lost and damaged tissue, I mean, it just, it just cries out for more research.

But later in the movie, when his mask is taken off, we see that he has a deformed face.

Then, why doesn't the regeneration power make his face like before? Is it stated in other movies of Friday the 13th franchise? I have only watched Friday the 13th (1980) and this one.

Why doesn't the regeneration power make his face like before?

Because his regenerates to heal, not to recreate. He was born deformed.

That's how he looked before he presumably died for the first time: 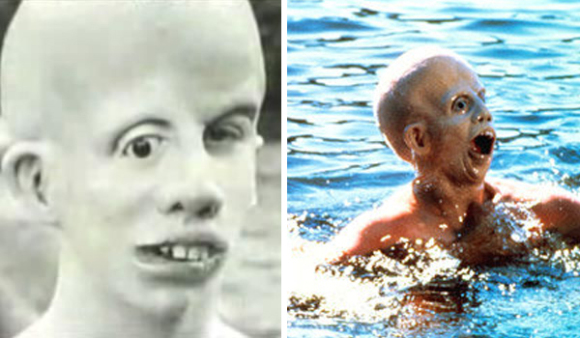 Plus, his healing and other powers become more powerful after Friday the 13th Part VI: Jason Lives, where Tommy Jarvis's action accidentally revived him and, in that film, we see how powerful he become after coming back to life. So I guess his regeneration abilities are like those of Deadpool. He can heal new wounds but can't fix his deformed face, except in Jason's case he had that face before he got his powers.

Is it stated in other movies of Friday the 13th franchise?

Why Jason had that powers is explained by Marcus in his weird way:

She [Pamela Voorhees] makes a deal with the devil by reading from the Necronomicon to bring back her son. This is why Jason isn't Jason. He's Jason plus The Evil Dead, and now I can believe that he can go from a little boy that lives in a lake, to a full grown man in a couple of months, to Zombie Jason, to never being able to kill this guy. That, to me, is way more interesting as a mashup, and [Sam] Raimi loved it!

It's not like I could tell New Line my plan to include The Evil Dead, because they don't own The Evil Dead. So it had to be an Easter egg, and I did focus on it...there's a whole scene that includes the book, and I hoped people would get it and could figure out that's what I'm up to. So yes, in my opinion, Jason Voorhees is a Deadite. He's one of The Evil Dead.

So if we count Marcus's word then Jason is like Deadite, like a zombie which survive any injuries.

21
Why did they call Harvey a two face even before the accident?
2
Why did his sister make a scary face?
7
Why was Jason chosen over his mother to be the villain?
6
What did Voldemort look like before he killed the Potters?
5
Why doesn't Sheldon Cooper like whistling?
4
Why doesn't Laureline use her suit's “Juggernaut power”?
4
Why painting on the face?
9
Why was Whitney the prisoner of Jason Voorhees?
6
Did Jason ever have the pattern of picking his target or was it always random?