In the 6th episode of Game of thrones season 7, when Daenerys arrived to save Jon Snow and others, Daenerys offered escape on a dragon, but Jon refused and continued fighting against the army of dead while he could have easily climbed the dragon and left.

Why did he not escape when he had the chance?

He's actually about to take Dany's hand but sees that the party is still being attacked at close quarters.

He turns and defends the other member of the party so that they have time to climb on the dragon and, importantly, complete the mission by taking the wight with them.

Then things get away from him..

He's moving further and further away from the party... and towards the Night King...his principal enemy. You can see the expression on his face is one of defiance and anger. 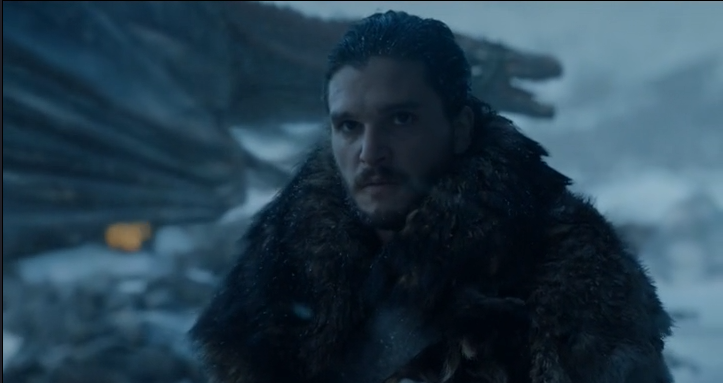 Only when the Night King threatens to take down the dragon Dany is riding does he come to his senses.

Now the party is really at risk of not escaping and, thus, failing in their mission...so he tells them to go but is taken down and pushed under the ice as he attempts to re-join the party.

40
Why did Daenerys say this in "The Queen's Justice"?
26
Why didn't Jon Snow use this?
71
Why did the Night King attack the furthest target first?
10
Why didn't the Night King throw the spear at Jon Snow and team?
3
Why was Jon snow resting with his dragon on the wall?
6
Can Jon Snow command the dragons like Daenerys or is he limited to just piloting them around?
11
Why does Jon Snow blindly trust Daenerys?
27
Why did Jon Snow admit his fault in S08E06?
44
Why did Jon Snow do this immoral act if he is so honorable?