Why did Lucius interrupt Bruce during their Sonar/Submarine discussion?

In the 2008 movie The Dark Knight, Lucius Fox and Bruce Wayne had the following conversation in Hong Kong:

Bruce Wayne: What's this?
Lucius Fox: I had R&D work it up. Sends out a high-frequency pulse... records the response time for mapping an environment.
Bruce: Sonar. Just like a...
Lucius (interrupting with a smile): Submarine, Mr. Wayne. Like a submarine.

My question is: Why did Lucius interrupt Bruce and interject with "submarine"?

Was it just a subtle bit of humour to subvert the audience's expectations that they were going to compare it to bats using sonar to navigate? Or am I missing some other context (I'm not a reader of the comic books)?

For reference, one can watch the relevant clip here, starting at 5:10 (it's not my clip).

Was it just a subtle bit of humour to subvert the audience's expectations that they were going to compare it to bats using sonar to navigate?

...but it's also a not-so-subtle nod towards the fact that, even if not spoken out loud, that Lucius Fox isn't stupid and knows exactly what Bruce is doing with the technology.

In other words...Lucius knows Bruce is Batman but he's avoiding saying anything directly.

I suspect that it was a deliberate thing to subvert the very silly batman trope of every single piece of technology being a bat-somethingorother. Something which got vastly out of control in the previous movie franchise. Yes Batman and Robin I'm looking at you.

As mentioned in a comment this was original done in the TV series, but there is was more in keeping with the overall camp and cartoonish style which it chose to adopt. In the context of the much darker and gothic (albeit still quite stylised) tone established for that particular series by the first Tim Burton Movie, Batman and Robin was just plain weird.

This is also reflected in the fact that in eh first two instalments at least quite a lot of emphasis is put on exactly how iconic bits of equipment were procured through Wayne Enterprises. 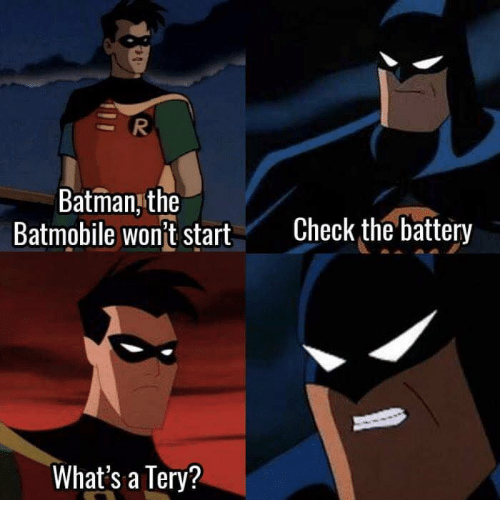 Throughout the trilogy Nolan was quite careful to keep a very tight reign on realism insofar as is possible with a superhero movie (obviously there are limits). One of the strengths of the Nolan trilogy is that by unraveling the psychology of Batman and making a reasonable effort to keep things reasonably credible it makes the characters and story a lot more relatable and reinforces the sort of internal logic that you need really need to create an coherent story with characters that you care about and a genuine sense of jeopardy, something which is often a problem in superhero movies.

Not the answer you're looking for? Browse other questions tagged dialogue the-dark-knight .

12
Did Harvey Dent know that it was Bruce Wayne who locked him up?
25
Why does no one notice the Joker's presence as a policeman during the mayor's speech?
7
Why was Lucius Fox still a part of Wayne Enterprises in Dark Knight Rises?
4
Why did the Joker choose Harvey Dent?
7
Why did Batman: TAS stop using a different voice for Bruce Wayne?
26
How did Alfred's story about the bandit help Bruce in dealing with the Joker?
33
What did the Predator say to Dutch during the final fight scene?
7
What is exactly Alfred referring to in this dialogue during conversation with Bruce?
0
Why do some characters say 'Shhh' to their victims while murdering them?