What's the purpose of Aurra Sing appearing in Star Wars Episode One?

In Star Wars Episode One, the bounty hunter Aurra Sing can be seen for a few seconds watching the pod race on Tatooine. She never reappears again in this episode or any other episodes, though later she appears in the Clone Wars cartoon. 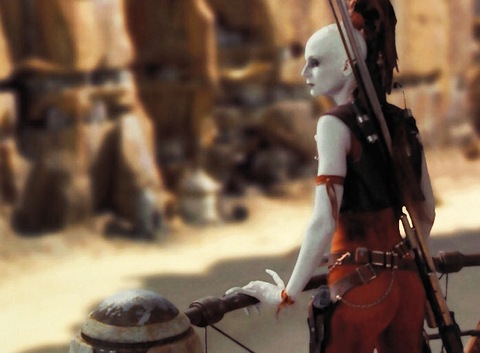 Does anyone know why she was in the movie? Was there any particular reason for her (and not someone else from the Expanded Universe) appearing in the movie watching that race (other than selling some more merchandising stuff)? Or were there some other scenes that featured her but were cut out later?

As far as I know, there were no intended extra scenes for Aurra Sing. She was based on a sketch by the concept artist Doug Chiang who was designing female bounty hunters at the time, and was popular enough with GL to get one of his 'stamps' on the artwork and a live appearance. She turned out to be enigmatic enough to become a fan favorite, and prompted a slew of back story which also resulted in her appearance in the new Clone Wars series.

So many of these 'blink and you miss 'em' characters appear in the Star Wars saga - often elevated to more prominence due to fan demand (look at Hammerhead in the cantina, or Bossk from Vader's bounty hunter team). For me, it's part of the appeal of the saga - a glimpse at a much larger galaxy.

Not the answer you're looking for? Browse other questions tagged character star-wars the-phantom-menace .