How did Leonard and Sheldon lose their pants?

In the pilot episode (S01E01) of The Big Bang Theory, Leonard and Sheldon lose their pants while visiting their new neighbor's ex-boyfriend, as can be seen in below for example. 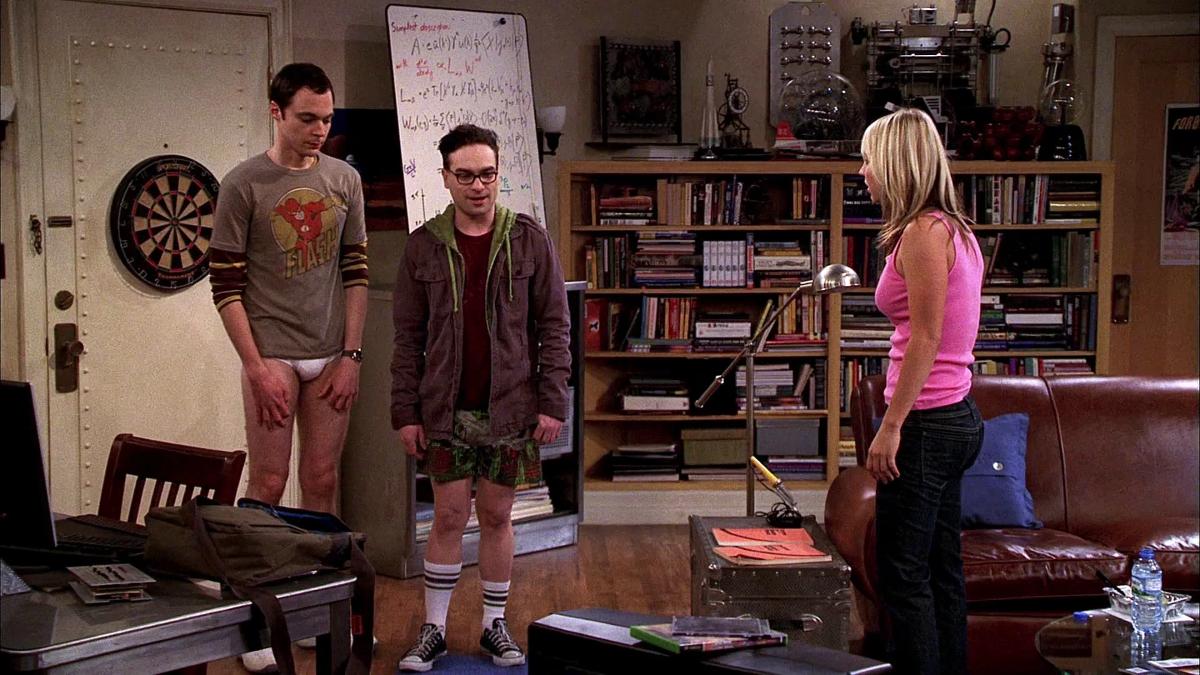 I realize they pissed him off big time, but it wasn't shown.

Is this explained anywhere what exactly they did to the ex-boyfriend and how he managed to take their pants?

My assumption he just grabbed them off by force, but it can be anything else, hence I'm asking here. (e.g. maybe it's explained in later episodes I didn't watch yet)

As you mentioned, Leonard and Sheldon made him angry. Not only once, but twice Leonard knocks on his door. At first he (being somewhat roughly polite), acknowledged about his debt on penny and he will pay her back, but not telling when or how he was going to do so. Leonard being somewhat naive and needed to be a hero to penny (The man who brings back what's rightfully hers), knocked on his door again, and asked him to when will he plan to pay her back.

While being not shown on screen, It could be the trigger point which leads to Leonard and Sheldon losing their pants and penny's ex made them publicly humiliate just because they pissed him off.

Removing people's pants completely (or just pulling them down to the ankles) is something bullies in US high schools are reputed to do (https://en.wikipedia.org/wiki/Debagging). Sheldon and Leonard both talk about this sort of thing being done to them in the past, along with having your head dunked in the toilet, lunch money stolen and so on.

The joke here is that the pants are not just pulled down, but removed, from both of them - in reality one would have got away -- and that the bully has kept the pants as well, forcing them to walk home in their underwear, embarrassed and exposed.

I'm not sure it is ever explained. To me it's a play on the wedgie tv trope where a bully pulls our heroes' underpants.

I can also imagine Penny's ex-boyfriend grabbing them by the belt as they try to run away from him and just holding hard enough for the pants to rip off.

Though very cartoony, It could fit the general tone of the series I think.

Not the answer you're looking for? Browse other questions tagged plot-explanation the-big-bang-theory .

8
How did Alan lose his chiropractic license?
6
Does Sheldon Cooper really care about Leonard Hofstadter?
4
Why does Sheldon not stop Leonard from sitting in his spot on the couch?
8
What floor do Leonard, Sheldon and Penny live on?
5
How was Sheldon able to play around with Rajesh and Howard
0
Why didn't Sheldon provide his references for sports statistics to his dad and meemaw?
5
How Sheldon concluded that the Amalek tribe and their cows should be killed?
14
How many restraining orders does Sheldon have?
17
How does Leonard in "Memento" remember reading and writing?
7
Is it known in which fields Sheldon Cooper's two doctorates and one master's degree are?