How could players move without some kind of rig to enable relative movement in the game?

In Ready Player One, it is shown a player needs some kind of rig to enable relative movement in the game. 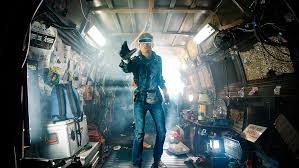 But when a group of Halo players attack on foot, there is no gaming rig to be seen, 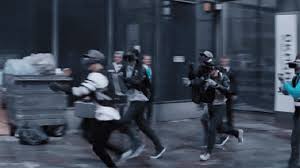 Of course, someone can argue that this group of Halo players are wearing a more compact version of movement sensing rigs. Is there an official explanation somewhere?

Standard Immersion Rig: pair of virtual reality goggles and a pair of haptic gloves, given to all new OASIS users.

The people on the street were using theirs. I believe you probably mean a "hamster-ball interior" or a "full-body immersion rig", which allows users to walk in-place to simulate real walking/running.

While their OASIS movements would also cause movement in the real-world, keep in mind players can still see their real surroundings. We know this because Art3mis can see IOI's boss closing in on her in a previous scene. We also know that the player's movements can be temporarily disconnected from the real world movements, as we see Z using an emotional response camouflage to be able to vent out while his character is standing emotionlessly still.

The full-body immersion rig/hamster-ball helps you stay still in the real world while moving in OASIS. The people you see on the streets aren't using one. This has 2 main explanations.

Not the answer you're looking for? Browse other questions tagged ready-player-one .

10
When the kids were getting attacked couldn’t they just leave the game?
1
Why did IOI not use bots to play the game?