What is the importance of the coffee cup in the poster of Awe?

Awe! (2018) is a Telugu thriller film with Kajal Aggarwal as the main protagonist. The following is the first look poster released as part of the film's promotion. 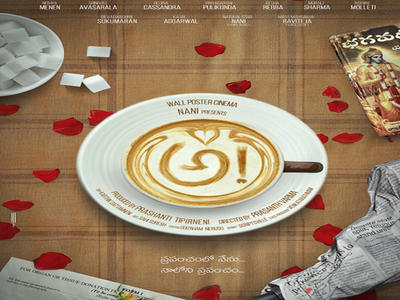 It mainly consists of a coffee cup with the title written using latte art along with some other objects like a pistol, Bhagavad Gita on the table.

What is the significance of choosing a coffee cup as the main theme for the poster? What is its connection with the plot?

Because part of it appears to be set in a coffee shop. The plot also seems to swirl somewhat like the latte.

A dubious English translation of a description of the movie here

Story of Awe movie is inspired from true events producer nani first production house is bringing true stories which is receiving lot of positive response. Awe movie story spin around in a coffee shop and same table with same order every day.

I guess you need to watch the movie to really get the connection here. None of the reviewers on IMDB seemed to get confused about why the coffee cup was on the poster, so it must be something pretty obvious in the film...

Short Answer: The entire movie is set in a Food Court/coffee shop. The poster is showing some of the props used by Kali from the movie. It is showing the items arranged on Kali's (Kajal Aggarwal) table.

The First Look poster gives a glimpse of props possessed by Kali with her. The poster shows a coffee cup in the center surrounded by different objects like Bhagavad Gita, rose petals, Pistol, chits.

The film starts with Kali, a troubled woman thinking about something in a coffee shop. The story is spun around the events happening in the foo court. All the main characters shown in the film are related to this Food Cart. Either they work there or visit that place. So, the coffee cup symbolizes the location the movie takes place i.e., a coffee shop.

As we move forward in the film, we come to know that the posture has used some of the items Kali has with her. They are Bhagavad Gita book, a Pistol, an organ donation form. In the beginning, she plucks petals from a red rose thinking "Do it, Don't do it". She gets an option to do it whatever she was thinking to do. She determines to do it and signs an organ donation form. Plucked rose symbolizes that her life which is also full of troubles.

Kali somehow gets a pistol and tries to use it against herself. At the end of the movie, she says that she wants to commit mass murder and she won't regret by doing that. The same pistol was shown in the poster.

The decision she was taking was about committing suicide. She says it is a mass murder because all the main characters shown in the film were reflections of herself as she was suffering from psychological issues like Dissociative identity disorder, child abuse and other. By mass murder, she means she's killing all the personalities inside her.

By watching the film, we will know that these props also relate to different characters or the episodes take place in the film. Each character is an aspect of Kali's life.

So, the posture was designed in such a way to represent each main character with some object related to them. At the same time, importance was also given to Kali, the protagonist by showing objects on her table.

Not the answer you're looking for? Browse other questions tagged analysis posters awe .

57
Meaning of the Silence of the Lambs poster
22
Why was The Hard Candy poster made in reverse to the plot?
44
What is the meaning of this poster for The Lobster?
18
What exactly does the poster of Schindler's list depict?
3
Why was the original tagline changed from the movie poster?
3
Why Knight of Cups poster look like that?
4
What do the triangles in the Ghost in the Shell (2017) poster symbolize?
12
Why does only Rachel have open eyes in the Friends poster?
7
What's the meaning of butterfly in the Antebellum poster?