How are sliding shots of stills during an action sequence filmed? [duplicate]

I've seen several shots where an action sequence is halted and then the camera seemingly moves around while the action is frozen in place. An example of what I'm talking about can be seen in this YouTube clip.

I've also seen this used in sports action replays, where the play gets frozen and then the shot transitions to another camera's view of the play.

How are such shots filmed?

The technique is called "Bullet Time" and it is done with an arced bank of cameras surrounding the subject. By switching from one camera to the next in sequence the point of view swings around the subject creating the illusion of a single camera moving. In the example you cite, the director chose to use still frames from each camera to appear to freeze time. 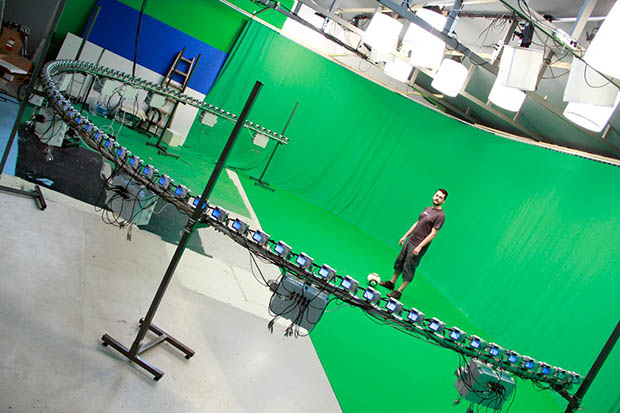 In this clip » from "The Matrix," you can see how a director uses a green screen to shoot the subject and then drop in a background in post production.

There's also the low-tech variation of the Bullet-time effect, with just one camera: 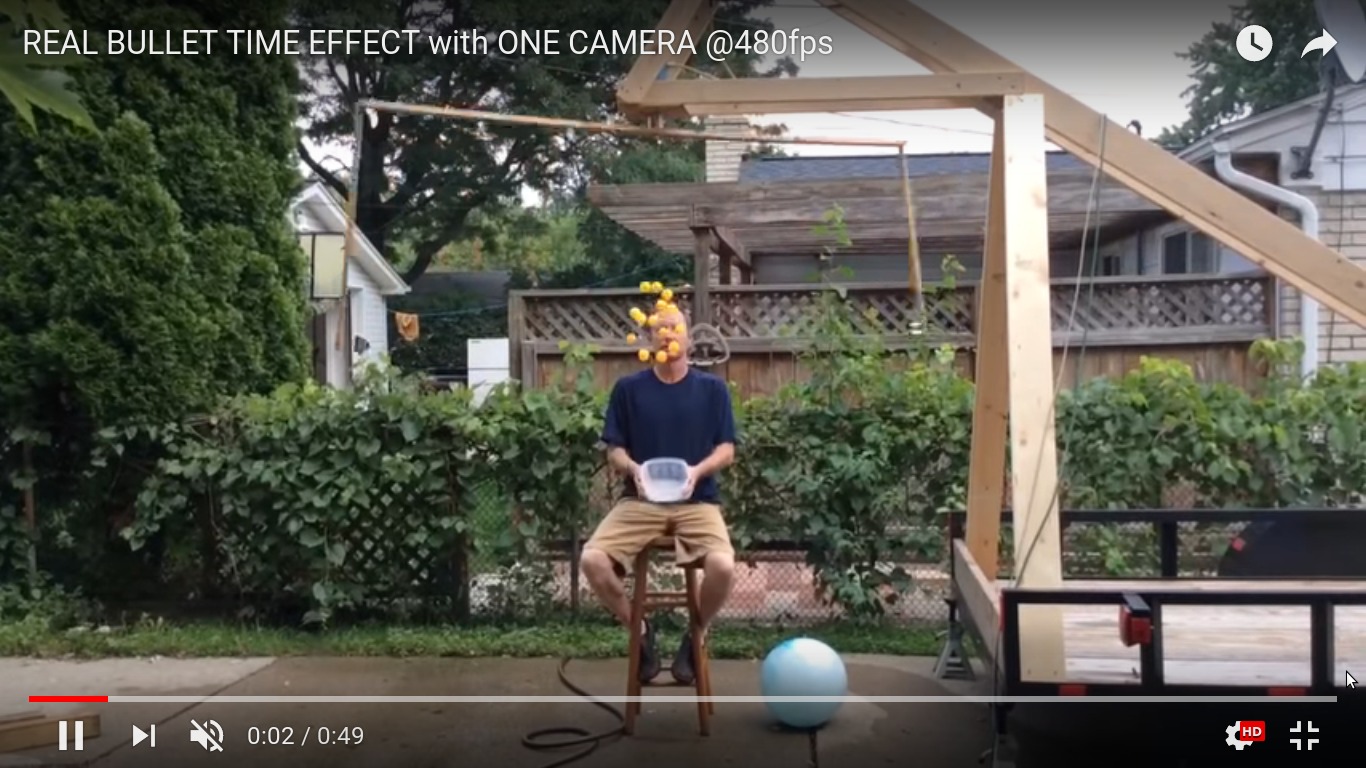 For this, you need :

In the Grand Tour example above, it seems to be the more expensive variant though, since the water splash doesn't appear to be moving at all between the frames. Note that they used each frame twice (forth & back) in order to use half as many cameras.

There are two main techniques.

the first is to arrange a sequence of still cameras along a fixed track which is equivalent to a camera move. To completely freeze the shot these will all take an image simultaneously, for slow motion they can be fires in a sequence equivalent to the frame rate you want to achieve.

It is also possible to combine this with either a motion control video camera on the same track either simultaneously or in two separate shots which are later composited together.

Alternatively you can use a high frame-rate video camera with a fast motion control to achieve a similar effect with a single camera.

In some cases you will have an actor moving in real time with events around them eg a crowd or explosion happening in slow time or vice versa. This can either be done in green screen or by compositing different motion control shots together. In some cases you can get a wide range of frame rate by having one set of actors perform in actual slow time or keep as still as possible.

Its also not uncommon to use depth of field and possibly forced perspective camera effects to further enhance the sense of unreality.

As is often the case in film it is often a a matter of combining physical, camera, digital and post production effects to get exactly the result you want.

The answers here are good for the theatrical explanation. The sports replays, however, work differently.

This is much cheaper than installing the zillions of cameras that would be necessary to accomplish the same effect on something the scale of a playfield, and it's flexible enough to generate transitions between several key cameras.

A search for "interpolated camera positions in sports broadcasting" will turn up lots of references on this approach.

11
How are 3D still shots or “time stop” effects created?
12
Time freezes and actors and things can be viewed from different angles. What is this special effect called and how is it made?

24
How are underwater scenes in movies filmed?
9
How are death and autopsy scenes filmed?
34
How are head shots and deep throat gashes filmed?
11
Style of shooting where common activities are filmed as if they were epic
11
Why are zoom shots rarely used?
12
How was pre-title opening in Spectre shot?
14
How are car drag scenes filmed without hurting anyone?