Were they goblins or orcs?

In The Hobbit: An Unexpected Journey, in the mountains when the whole party was brought into the mountain and Bilbo found Gollum, were those creatures orcs, goblins, or something else? I initially thought they were orcs (guess I wasn't paying quite enough attention to what they looked like) but my girlfriend said they were goblins. I'm a bit confused. So were they supposed to be goblins or orcs?

From a Tolkien FAQ:

They are different names for the same race of creatures.

Of the two, "Orc" is the correct one.

This has been a matter of widespread debate and misunderstanding, mostly resulting from the usage in the The Hobbit (Tolkien had changed his mind about it by The Lord of the Rings but the confusion in the earlier book was made worse by inconsistent backwards modifications).

In the The Hobbit, which originally was unconnected with the The Silmarillion, he used the familiar term "goblin" for the benefit of modern readers.

There are a handful of examples of "goblin" being used (always with a small "g") but it seems in these cases to be a kind of slang for Orcs.

In the movie this guy was referred to as Goblin King, who ruled over Goblin Town. 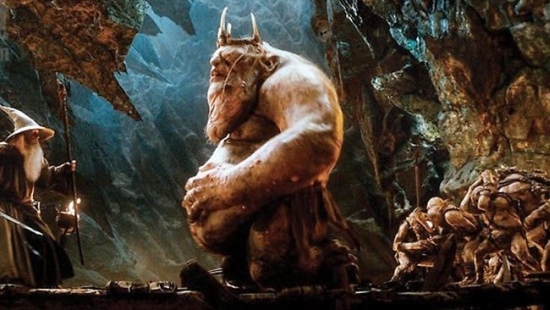 Orcs and goblins are most certainly related, if not even the same creature. Tolkien, in early drafts of both The Hobbit and The Lord of the Rings, would sometimes use the terms interchangably. Later, it seems he came to see orc as a more generic term, and goblin a specific term for larger-in-stature creatures.

There is also evidence that Tolkien considered orc to be a term hobbits would use, when others would use the term goblin, or perhaps orc a more proper term while goblin was a more colloquial one.

In the LOTR movies, the term orc is used almost exclusively, staying consistent with the books. In The Hobbit movies, Peter Jackson also chose to use the term orc over goblin most of the time, presumably to keep the movie feeling like a part of his other trilogy. However, he made the decision to make them look differently than the creatures in the LOTR movies.

In Tolkien's mind, at least when he was writing The Lord of the Rings, "Orc" and "Goblin" were two different words that referred to the same thing (think "humans" and "people", or "young men" and "boys", or "dogs" and "pooches").

This was probably also true of his mindset when he wrote The Hobbit, since the name of the sword "Orcrist" is translated in The Hobbit as "Goblin-cleaver".. If the sword is known as Orcrist/Goblin-cleaver, it seems pretty clear that Orc and Goblin can be used interchangeably, and do indeed mean the same thing.

Many people have wondered about this question since the books were written, and the canonical answer is quite clearly that "Orcs" and "Goblins" are synonymous. However, there is one passage which calls this into question - at one point, Tolkien writes something like "...all the Orcs, and goblins, and hobgoblins", which could be interpreted as implying that the three things are not the same. But everywhere else in the book, and in all his other writing, Orcs are goblins and goblins are Orcs - there is absolutely no difference. His son Christopher Tolkien later confirmed this to be the case.

This is due to the fact that The Hobbit had a very different origin than The Lord of the Rings. The former was written as a story Tolkien originally told his young children at bedtime, and was published as a children's book. He began writing The Lord of the Rings years later, and in a much darker period in history - most of the story was written during WWII, and Tolkien lived in Britain, and was subject to the fear of imminent invasion by the Nazis at any moment. The project quickly became much darker and more adult oriented as a result. By the time it was finally published, in the early 50's, The Lord of the Rings was a very different book from the much lighter, brighter, and child-friendly Hobbit.

As for the movie version of The Hobbit (in the Peter Jackson series), goblins and orcs are very different indeed. In the Hobbit movies, Orcs are as sinister and menacing as they are in the LotR movies - they are evil, crude, fairly large, and inarticulate. The goblins, on the other hand, are smaller, less wicked, less frightening, more articulate, and more comical. In fact, compared to orcs, the goblins almost seem silly and harmless.

It isn't clear why this is the case. I would imagine that it is due to a combination of factors:

It appears that part of his problem - how to achieve a sense of harmony between the book The Hobbit and the tone of his LotR films - was resolved by keeping the scary LotR-style orcs but also keeping the sillier Hobbit-style goblins. And apparently, he decided to make the orcs a different species from the goblins. He was, in this way, able to give the audience the darker tone that they expected from the LotR movies, as well as the lighter depiction of the goblins from the book The Hobbit to keep the diehard Tolkien fans relatively happy.

In fact, he seems to have failed in his attempt to please the Tolkienites, because the finished Hobbit trilogy is wildly different from the book. Jackson himself probably doesn't care much, because the two trilogies combined have earned over $10 billion dollars worldwide, and he is now a very rich man.

For more information about this issue, you might want to check out the SE Science Fiction and Fantasy site. It is focused more intensively on issues regarding the novels those movies are based on, and is home to a large number of devoted Tolkienites. You can also google "orcs goblins", or simply click on this link to "The Middle-earth and J.R.R. Tolkien Blog".

Tolkien FAQ is incorrect. "Orc" is simply a synonym for goblin. The Uruk are a larger stronger subspecies of goblin which is probably where people get confused. The artificial distinction between orcs and goblins is one of the few peeves I have with Jackson's masterpiece and I would dearly love to hear the three creative forces for the movie explain why they made this distinction when they could have used the existing distinction between the larger Uruk and smaller weaker snaga (although both are still goblins/orcs).

In the book, the goblins or orcs encountered by Thorin and Company are the goblins of the Misty Mountains. These are the goblins (or orcs) who ride in fron the North at the Battle of Five Armies. Azog was long dead, having been killed by Dain Ironfoot in 2799 of the Third Age at the Battle of Azanulbizar. Thorin met up with Gandalf in mid-March 2941 TA and the Unexpected Party takes place April 26, 2941 TA.

Forget video games and movies. The authoritative sources are going to the books written by Tolkien himself and he is quite clear that orc = goblin.

Source: Untold Tales, The Silmarillion, The Hobbit, The Return of the King Appendix A

Orcs are pale white creatures that are tall and are an enemy of the dwarves; goblins are greedy nasty creatures that are very cruel and live in the side of the Misty Mountains and in the Mines of Moira. Orcs destroyed Moira and beheaded the King Under the Mountain (Thorin’s grandfather).

Not the answer you're looking for? Browse other questions tagged the-hobbit an-unexpected-journey .

15
Why was Bilbo's sword not glowing?
5
What is the average life expectancy of Middle-Earth inhabitants?

12
Why could the warg riding orcs attack in daylight?
6
When were the scenes with Frodo shot for The Hobbit?
15
Why was Bilbo's sword not glowing?
7
Was the Orcs vs Dwarves battle scene supposed to be funny?