Why did the girl try to kill herself in the 2009 Sherlock Holmes film?

In the beginning of Sherlock Holmes (2009), Lord Blackwood attempts to kill a young woman during some sort of dark ritual and is thwarted just in time by Holmes and Watson. Blackwood himself was not going to do it, instead he put her in some sort of "spell", causing the girl to attempt to stab herself. 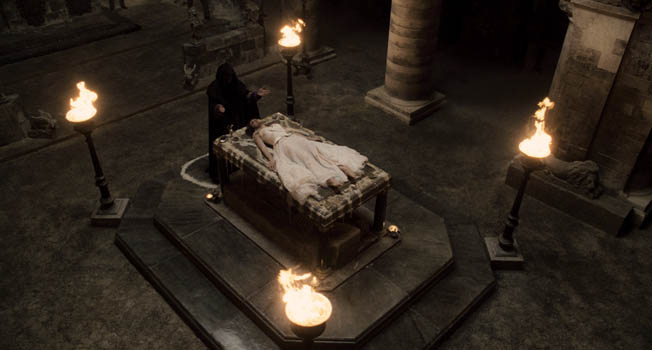 Given that the "supernatural powers" of Lord Blackwood were revealed as nothing more than "conjuring tricks", why did the girl try to stab herself at the direction of Blackwood?

I never saw a definitive explanation, but there are three theories:

She was probably a mixture of drugged and hypnotised.

Observe the power of auto suggestion in the film with the public thinking that Blackwood is a demon. Even the order (who are well-educated people) have convinced themselves they have magic powers.

With the right conditioning, a cocktail of drugs and a touch of Hollywood "magic" (special effects) she could easily have been moved to attempt suicide.

Blackwood needed to be arrested and 'killed' so that the public would be aware and afraid of him.

Once the public found out about it, his reputation would go before him and others, including senior members of the Houses of Parliament, would be more susceptible to blackmail. To be publicly executed, he would need to commit a crime to go with his air of magic so what better way than asking members of his cult to commit suicide and making it look like he had control over them?

Basically, the girl was an actress and it was all a big publicity stunt.