Has a TV show ever used the same title for more than one episode?

Most TV series have titles for the individual episodes. They seem to always be unique, but is this actually the case, or is there a show which have used the same title more than once?

You might think a unique title is needed to identify an episode. But they are more commonly referred to by season and episode number. They also have individual production codes.

With some shows having hundreds of episodes and with changing staff throughout the years, it seems likely that the same title could come up again eventually. Or is someone in the production responsible for making sure the title haven't been used before? Perhaps it could even be done intentionally.

It's actually quite common. Here are some examples I found in the top 200 TV shows on TheMovieDB:

10 duplicates that I found including:

Duplicate episode titles are extremely common in reality TV as each season follows a similar formula:

Talk and news satire shows usually have episodes named after any guests appearing in them. As such there are hundreds of duplicate episode names for shows such as The Daily Show, The Late Show and The Colbert Report.

Casualty! Not only for using duplicate titles over 50 times, but also for having two episodes titled Déjà Vu:

The anime The Melancholy of Haruhi Suzumiya does this as part of its notorious "Endless Eight" arc. The arc consists of eight almost-identical episodes, depicting successive iterations of an endless time loop. All eight episodes are simply titled "Endless Eight", as confirmed by the show's Wikia: 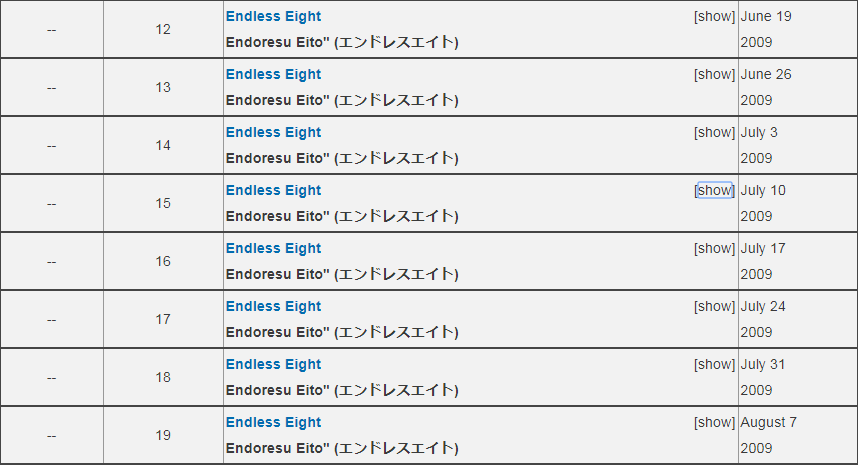 Children's TV also gives some examples. For instances, Thomas and Friends had "Dirty Work" in seasons 2 and 11.

24
Who is responsible for movie titles in foreign countries?
3
What is the significance of the Frasier episode title 'Agents in America part III'?
19
Where's the actual Palindrome in the season two finale of Fargo?
13
Have there ever been movies with the same name, released in the same year?
11
Does the title of True Detective have any meaning within the show?
5
Why is the prefix 'Ani'(And) used in the title of Dr. Kashinath Ghanekar biopic?
2
Why does The Magicians episode have this title?
3
Why is only the first episode referred in the movie title?