Did Jar Jar Binks appear in any of the new Star Wars movies?

The Star Wars movies The Phantom Menace, Attack of the Clones and Revenge of the Sith feature a character called Jar Jar Binks. As per Wikipedia,

Jar Jar Binks is a fictional character from the Star Wars saga created by George Lucas. A major character in Star Wars: Episode I – The Phantom Menace, he also has a smaller role in Episode II: Attack of the Clones, and a one-line cameo in Episode III: Revenge of the Sith, as well as a role in the television series Star Wars: The Clone Wars. The first lead computer generated character of the franchise, he has been portrayed by Ahmed Best in most of his appearances. 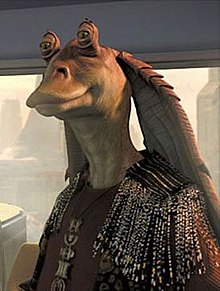 After his appearance in Star Wars prequels, what happened to Jar Jar Binks? Did he appear in any other new Star Wars movies, or did the movie makers just remove his character?

what happened to "Jar Jar Binks"?

This part has been total speculation until it was officially stated in the third book (Aftermath: Empire’s End) of Star Wars: Aftermath. According to this book, he returned back to Naboo after the Empire rising and dressed up as a clown and started performing in the street. He felt sorry that he let the Empire rising.

From this Express article

According to Mashable, the new book sees Jar Jar returning to Naboo, where he dresses as a clown and becomes a street performer.

In one scene a refugee boy called Mapo recognises the accident-prone alien and Jar Jar explains he’s very sad he helped the rise of the Empire.

Now coming to your second question,

did he Appear in any other New Star war Movies or Movie Makers Just Remove His character?

No. He didn't appear in two movies of Star Wars sequel trilogy nor in Star Wars original trilogy. This character was created for prequels, but due to criticism of this character, its role was shortened for the rest of the prequels. However, there is a voice heard in revised version the sixth episode where a voice of possibly a Gungan at Naboo saying,

Though, I am not sure if it was Jar Jar or not.

6
Who is killed in the assasination attempt on senator Amidala?
34
Is it necessary to watch Star Wars: Episode III - Revenge of the Sith before embarking on Star Wars: Episode VII - The Force Awakens?
24
What does the prophecy exactly say in the Star Wars saga?
9
Why are there such large gaps in the Star Wars release timelines?
10
Why does George Lucas not direct any more Star Wars movies?
2
What title does Padmé Amidala have?
6
High ground in Star Wars
1
Was George Lucas inspired by philosophy of Buddhism or other philosophy to write the Star wars Scripts?
14
Time jumps in Star Wars
6
Characters in Star Wars: The Clone Wars voiced by their movie actors