What happened to Groot at the end of Guardians of the Galaxy?

I always believed that baby Groot is the original Groot but reborn because plants can be cloned quite easily.

The simplest way to clone a plant involves taking a cutting. A branch from the parent plant is cut off, its lower leaves are removed, and the stem is planted in damp compost.

I always imagined the Guardians cloned Groot using simple plant cloning and then let him grow. One of the reasons is that they didn't seem to think much about Groot's death after Baby Groot sprouted and some basic biology skills.

I always believed that the original Groot was killed but the baby Groot was a genetic clone of his older version however my friend told me that Baby Groot is actually Groot's son.

My question is: Is the original Groot dead and Baby Groot is his offspring of is baby Groot or his genetic clone?

Even if he is not a genetic clone I will still choose to believe he is one because its too sad to know the original Groot died!

PS: My question is not is Groot dead because he has been genetically cloned because that's opinionated and it's kind of up for discussion.

The original Groot is dead and Baby Groot is his offspring

So I went home and did some research and found that James Gunn writer of the Guardians of the Galaxy Vol 1 has made comments on the subject.

and when fans asked whether it was canon he replied saying: 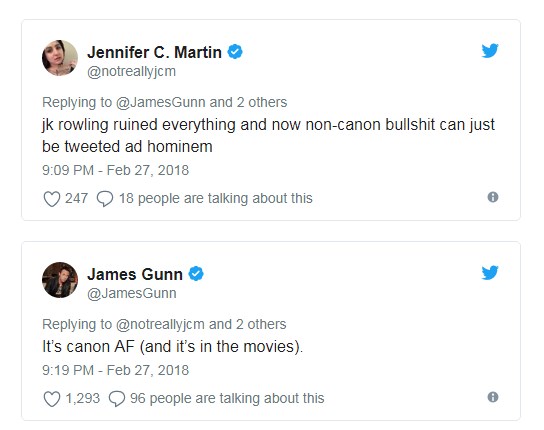 Plus, what does "dead" even mean for Groot?

Even if what you say is true - and it may not be true that Groot was asexually reproduced - then you would believe Barbra Streisand’s new dogs are her original dog and that is so very clearly not the case.

Think about it imagine if a little version of yourself showed up with none of your knowledge, memories or experiences and the old, big you was gone, is that not, effectively, death?

So canon wise the original Groot is dead and baby Groot is his offspring.

But I still choose to believe that Groot is not dead!

We know from the film that Groot can 'die' and that his sacrifice constituted such a death. The knowledgeable Collector and Groot's friend Rocket both make statements that suggest this:

You must allow me to pay you now so that I may own your carcass. At the moment of your death, of course.

and during the spaceship crash,

The evidence suggests that the new Groot is a clone child of the original rather than a non-genetically identical child. As pointed out in the question, cloning most plants is trivially easy. Baby Groot is a cutting from old Groot which is grown in a hospitable environment until it is developed enough to walk around. Noticeably he lacks the memories and intellectual maturity of the original Groot suggesting that it is more appropriate to consider him as a clone child rather than as Groot reborn.

Since we don't know much about Groot reproduction it is possible that Groot was 'pregnant' with a fertilized baby for the entire film. However, it seems extremely implausible that the baby would be the only sizable bit of Groot to survive the fiery explosion. Far more likely that any bit of Groot could have eventually regrown in the same manner as the fragment that happened to survive.