What do the bumps on Killmongers body mean?

In Black Panther, when Erik Killmonger first shows off his body it is covered in scars.

He states that for every kill he makes he scars himself on his chest.

Why does he does he do this? Does it mean anything? And how does he scar himself? How many scars does he have?

There are a number of African cultures spread across the continent that have traditionally used scarification and cicatrisation as a form of body art and Black Panther’s costume designer Ruth E. Carter has championed bringing as much real world African influence into the movie as possible.

In the film he scars himself as you say "for every kill he makes".

In a way, Killmonger’s motivations to team up with Ulysses Klaue (Andy Serkis) to disrupt and overthrow the Wakandan monarchy come from a somewhat similar place. Speaking to EW, Chadwick Boseman described Killmonger as the “voice of a different side of Wakanda” who puts the Black Panther in a difficult political situation. Killmonger’s willingness to hurt and potentially innocent people isn’t necessarily rooted in a desire to be destructive, but to be the agent of change he thinks Wakanda needs.

It’s possible then, then Killmonger might see the kills he’s named himself after not as random acts of violence, but rather, purposeful and necessary things he’s done and would choose to wear symbols of proudly on his skin.

Does it mean anything?

Killmonger’s scars could also be a subtle nod to another comic book villain—Victor Zsasz, a member of Batman’s rogues gallery. Like Killmonger, Zsasz’s body is covered in dozens of carefully carved cuts that tally the number of people that he’s murdered. To Zsasz, his murders aren’t borne out of pure desire to kill people, but rather out of a warped sense of duty to “liberate” people from their lives.

It also tells us as the viewers what a ruthless killer, Killmonger has become and how revenge for his dad and avenging his ancestors has caused the death of several thousands more. It shows us his eagerness to take back the Throne and it shows how much thirst he had for revenge (as he was willing to kill all these people just to take back the Throne)

How does he scar himself?

It's a type of scarring called 'Crocodile Scarring' 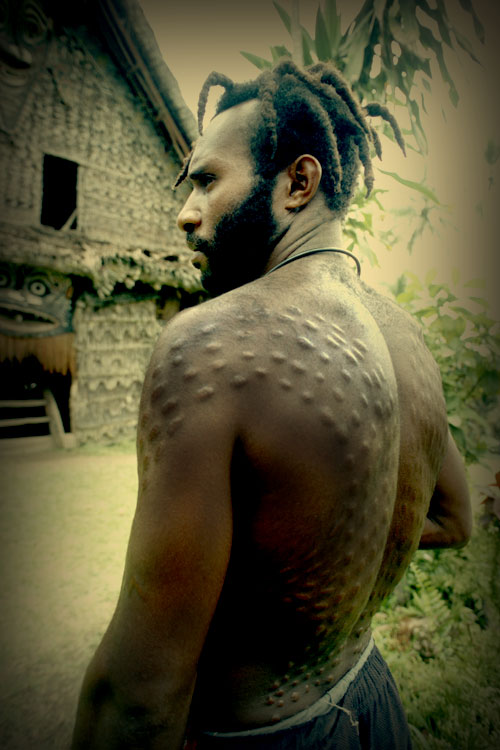 The men of the Chambri tribe in the East Sepik province of PNG practise crocodile scarification, an initiation for boys entering manhood during which their skin is cut and scarred to represent the scales of a crocodile. The crocodile is a significant spiritual and symbolic animal in PNG, and the Chambri tribe believes it descends from the powerful predator. The ancient myth tells the story of how crocodiles migrated from the Sepik River onto land to eventually become humans.

If you want to learn more watch this documentary by the National Geographic on it.

How many scars does he have?

9
How did Angier perform The Real Transported Man?
15
What makes Ultron the person he is?
5
What was Mary's real intention?
1
What are the scars on Jack's back?
10
How is being Wakanda's king and Black Panther connected?
6
How did the Border Tribe plan to subdue Black Panther?
6
Why would W'Kabi go against T'Challa?
5
Why did Venom only eat heads?
10
Why is John Wick wasting bullets?