How could Ant-Man become so small?

In Marvel's movie Ant-Man, Scott can become small by reducing the space in atoms.

There is a lot of empty space in atoms. 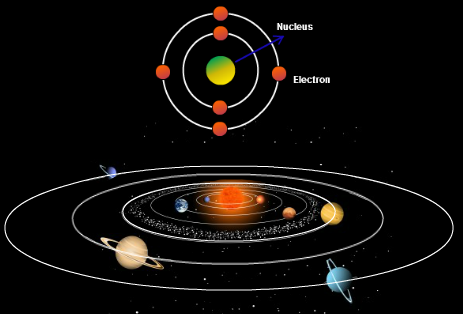 But the diagram of the atom, and the diagram of the solar system, are both huge exaggerations. If the whole earth was the size of a map pin (a little smaller than a pea), the sun would be almost 100 feet away. And there are more planets that are much farther from the sun! So there is a lot of empty space in the solar system, and also a lot of empty space in an atom.

The Ant-Man technology says that it is "getting rid of the space in atoms". There is plenty of space in an atom to compress. And if you compress all the atoms in a human that much, you can make a person smaller than an atom.

No, it's not an exaggeration.

In the movie, Hank Pym equipped the Ant-Man suit with a regulator so that it won't get into the sub-atomic quantum realm and get lost forever, like his wife (van Dyne's mother) did:

While van Dyne harbors resentment towards Pym about her mother Janet's death, he reveals that Janet, known as the Wasp, disappeared into a subatomic quantum realm while disabling a Soviet nuclear missile. Pym warns Lang that he could suffer a similar fate if he overrides his suit's regulator.

Ant-Man can go beyond reducing the space in atoms, he can go subatomic level which Hank Pym suggested him not to go:

Hank Pym: Do not screw with the regulator. If that regulator is compromised you would go sub-atomic.

Hank Pym: It means that you would enter a quantum realm.

Hank Pym: It means that you would enter a reality where all concepts of time and space become irrelevant as you shrink for all eternity. Everything that you know, and love, gone forever.

So going beyond atom was possible from start but not suggested to do so because you can get lost like Hank Pym's wife did.

Not the answer you're looking for? Browse other questions tagged character marvel-cinematic-universe ant-man .

35
Ant-Man, shrinking, and weight
13
How did Ant-Man manage to get big again?
0
How do we hear ant sounds in Ant-Man?
2
How does Darren Cross know Scott is in the suit in Ant-Man?
4
How could Ant-Man break electronics after he penetrated through the Yellowjacket suit?
25
Why didn't Ant-Man become relatively weaker as he grew?
42
Why did Hank Pym choose Scott Lang?
1
Travel in Quantum Realm in Ant-Man and the Wasp
10
How did Aquaman get his tattoos?