How did movie makers make "Odie" act with an animated Character in Garfield?

"Garfield: The Movie is a 2004 American family comedy film directed by Peter Hewitt inspired by Jim Davis' comic strip of the same name. It stars Breckin Meyer as Jon Arbuckle, Jennifer Love Hewitt as Dr. Liz Wilson, and features Bill Murray as the voice of Garfield. Garfield was created with computer animation, though all other animals were real."

Garfield is a animated Character in the movie. Garfield's friend in the movie is "Odie" a real dog.

How did the movie makers make "Odie" act with an animated character? 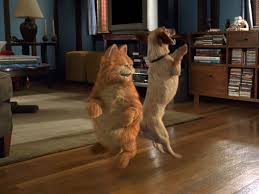 How did the movie makers make "Odie" act with an animated character.

By using a couple of very well trained dogs...

The dance-off in particular was a combination of blue-screen, the dog reacting to trainer commands and many, many takes.

Garfield shoves Odie off the chair various times, and they engage in a dance-off competition that features Odie hopping around on his back legs. Though they're having fun together, Garfield propels Odie across the porch when his other cat friends show up.

For this sequence, trainers first positioned "Tyler" in a stay position on a blue screen floor. As "Tyler" hopped on his back legs, a second trainer called the dog to come in the opposite direction and cued him to spin in circles in one spot.

This same action was repeated for various takes from different angles, and "Tyler" was conditioned and prepped for this scene for three weeks before actual filming began.

10
How do they mix real characters with animated characters?