Explanation behind the reappearance of Eobard Thawne during Crisis on Earth X? 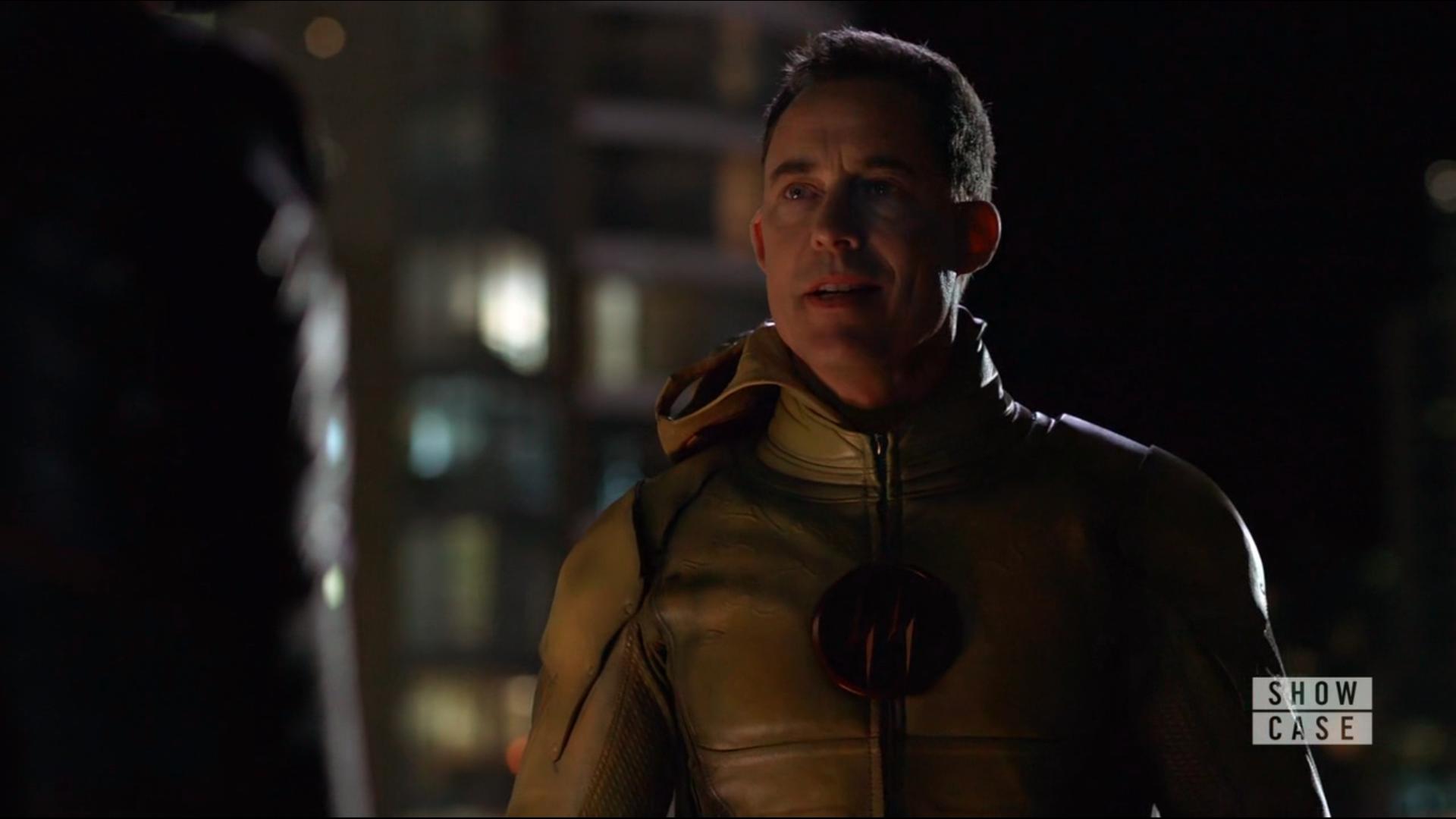 Eobard Thawne's sudden appearance surprises me a lot, he dies, and then again reappears. But what's the specific explanation of him showing up during the Crisis on Earth X crossover? I remember him indirectly referring, being the Reverse Flash of Earth 1 during the crossover, but what the heck is he doing on Earth X? And why's Tom Cavanagh playing Matt Letscher's role?

It's because the events in Flashpoint

An alternate timeline, coined Flashpoint by Eobard Thawne, was created by Barry Allen when he traveled back in time and saved his mother from the Reverse-Flash. The timeline was reset when the Reverse-Flash ran back in time and killed Nora Allen again, restoring everything pretty much to how it was before, albeit with some minor differences. However, after Barry Allen used a superseding form of speedster time travel to live in this timeline's version of 2016 for three months, he found the world much different to the timeline that existed before, with Cisco Ramon becoming the genius industrialist instead of Harrison Wells and Tess Morgan, Wally West becoming The Flash instead of Barry, and The Rival becoming a new menace of Central City

The Flashpoint timeline can still be accessed by those with dimensional awareness even though this timeline was reset by Eobard. This was shown when Cisco vibed into Flashpoint to determine Clive Yorkin's next victim. The victim was thought to resemble a cop in Flashpoint.

Additionally, the following events occur as a direct result of Flashpoint:

And of course, since things've changed, Thawne may not be dead as we thought he was. He is very much alive and seeking for revenge from barry

Major spoilers for everyone, dear people. This will decently explain the whole mess on the Flash-LoT.

Flashpoint Eobard becomes Wellsobard (without flawed Speed Force connection); when Eddie kills himself Eobard avoids erasure and goes in the Speed Force. He goes to 2000 and brings Barry back to 2016. Then Eobard goes to LoT; he is sent in the Speed Force by Black Flash. He escapes when Barry escapes from the Speed Force and appears on the Earth X crossover. 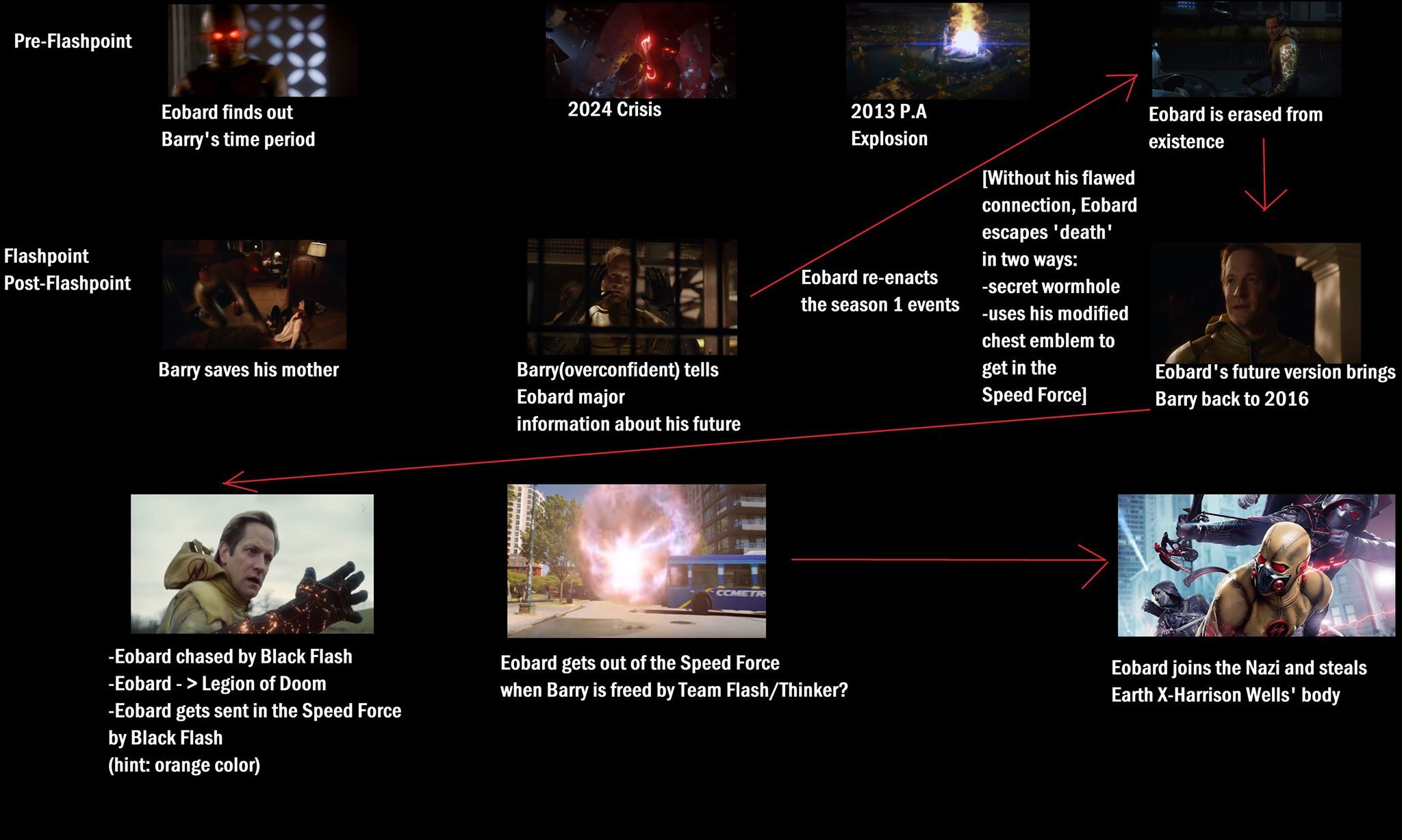 4
Why did Eobard Thawne react the way he did to Jay Garrick's helmet?
6
Why is Eobard Thawne in Legends of Tomorrow?
7
What is the order of the Crisis on Earth X episodes in the Arrowverse?
6
How did Barry speak to Iris when he is moving fast during the trial
2
Why is Eobard Thawne not affected by the side effects of creating a flashpoint
9
What are the different universes mentioned in Crisis on Infinite Earth?
5
Whom does this trophy belong to in Batman's collection during Crisis part two?
6
Every Character and show referenced in Crisis On Infinite Earth?