What happened to Frou-Frou in the 1967 Soviet film Anna Karenina?

In the 1967 Soviet film Анна Каренина directed by Aleksandr Zarkhi, there is a race sequence during which Count Vronsky's horse, Frou-Frou, is seriously injured.

What happened to the horse which performed this stunt? It seems impossible the real horse survived.

Here is the least violent picture of the sequence (I cannot even watch the other pictures: remember the horse is going full speed): 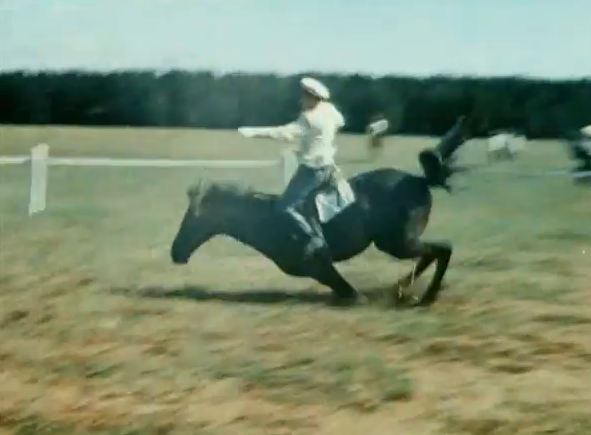 Has someone any piece of information about this?

I've been looking for a reference to this particular film but have been unable to find one.

However after watching the scene it looks plausible that a trip wire was used to bring down the horse. Trip wires were used quite a bit back in the 1940s and before. As this film was released in 1967 I was unsure if this technique was still used but after a little digging it looks like it was used as late as 1981 in the movie "reds" ref:http://www.imdb.com/title/tt0082979/

As "reds" was filmed in the USA which had the American Humane Association monitoring how animals were used in film and Анна Каренина was made in 1967 in the Soviet Union it looks like the makers could have easily used a trip wire.

Not the answer you're looking for? Browse other questions tagged effects stunts anna-karenina .

29
How do they make horses fall down in war movies?

40
How do they film scenes with the actors driving in a car?
14
Is the street fight in "They Live" the longest clocked street fight in a film?
6
What is the most time-consuming makeup to apply to a single actor in film or television?
35
What is this dog really biting in The Thing?
4
What are the film techniques for broken and protruding bones?
2
What is the film technique for someone breaking into pieces?
0
How did they film the special forces helicopter crashes?
0
What techniques were used to film Ariadne entering the dream world for the first time
0
Animals died during the film shooting?
6
What is the first example of warning messages about special effects being shown to audiences before a film?