How were the opening credits to Superman created?

The opening credits sequence for Superman is one of the most famous and recognizable in the history of cinema. How, exactly, was it produced? (I am speaking specifically about the animated, shimmering blue lettering.)

I found an interview with the title designer, Richard Greenberg, who briefly explains the method as follows:

For about two weeks we kept trying to figure it out. Then we realized we had to let the Oxberry run and put a black card in front of it to end the streak. The streak was created by putting a negative and positive Kodalith together with a blue gel in between. The blue gel allowed enough light through to create that streak. […] we bought an Elicon early in the ’80s. It was a very crude version of a motion control system. […] Hah, it didn’t quite work. It sort of worked. Those titles were created by re-working the idea of what the animation stand was; you would literally move the camera on the rostrum stand and cap it at particular points to create a kind of three-dimensional motion. Everything we did until the mid-’80s was pre-computer — Superman is all pre-digital.

Unfortunately, this explanation leaves out too many details, and uses too much technical jargon ("Oxberry", "negative and positive Kodalith", "Elicon", "move the camera on the rostrum stand", etc.) for me to really understand the process.

Could someone please describe the end-to-end process, step by step, in layman's terms, if necessary with explanatory diagrams?

Prior to the advent of computer animation, animation meant taking a bunch of still photos that had slight changes from one photo to the next and then playing those photos back fast enough to create the illusion of smooth motion. When doing animation this way, it's critically important to control every parameter of each still photo. You have to keep the camera absolutely still or control its motion precisely and you have to not move the things the camera is photographing in a random way. Control is critical. That's why there are things like:

Oxberry animation stands were made by Oxberry in New Jersey. They look like this: 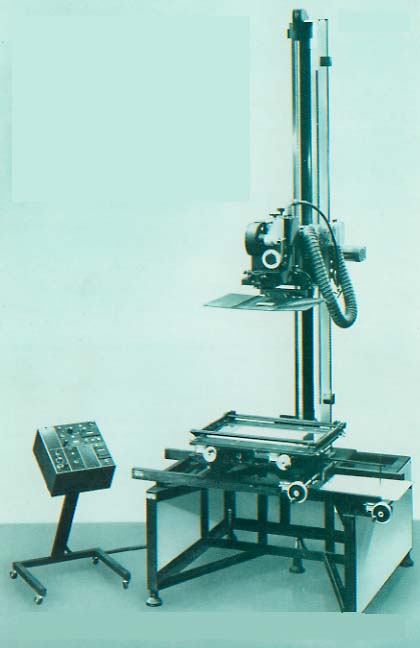 There's a lot going on with a device like this, so I'll try to summarize. An animation stand is a device that allows the precise control of the camera position and the positions of the objects of the animation (cels - basically drawings that are swapped out for each frame or still photo that makes up the animation). The precise positioning of the cels is called registration, and the reason why the Oxberry site talks about it a lot is because it's a big deal. One thing to keep in mind is that while the stand is most often used to hold the camera still and swap out the cels without any motion, it is possible to animate pans and zooms with the stand by using the controller to move the camera by small increments between taking shots.

Quoting from the National Portrait Gallery page on Kodalith (emphasis mine):

A type of photographic printing paper coated with an orthochromatic emulsion which gives a high contrast print with very dense blacks when processed in Kodalith developer.

High contrast and dense blacks are useful for different types of animation because they can be used to black out things on the resulting film image and can be used as masks. Now we understand the following:

The streak was created by putting a negative and positive Kodalith together with a blue gel in between.

Here's a page about the Elicon. It looks like this: 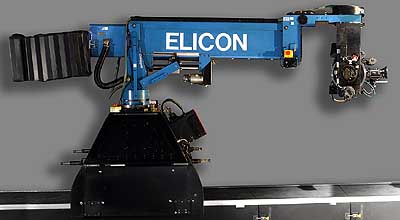 Making prints of text move around is really hard, so instead you put the text down on something fixed and flat (i.e. the rostrum stand of the Oxberry - the flat thing you put cels on) and move the camera instead. (Side note, fixing the object and creating the illusion of motion with a motion control camera is exactly how spaceships were filmed for Star Wars).

Having a motion control camera lets you do the animation smoothly, because you program the camera to move slightly, then take a frame, then move, then frame, etc.

I don't quite understand what he means by "cap it at particular points". I mean, I'm pretty sure he means put the cap on the lens to just film all black, but I'm not sure why they did that or how it helped the animation. They might have had to control the exposure for the streaks manually with the cap, especially as the exposure lasted longer and longer.

The technique for the streaks is a kind of slit-scan technique. The most famous use of slit-scan in filmmaking is probably the ending sequence of 2001: A Space Odyssey, although it was also used for the opening titles of Vertigo. If you think about the end of 2001, you can see the similarities to the Superman titles.

Not the answer you're looking for? Browse other questions tagged film-techniques effects credits superman .

48
How were Opening Titles and End Credits created before Computers?
3
What's the deal with freeze-framing during opening credits?

74
What rules govern how TV show opening credits are structured?
21
When did Opening Credits become Closing Credits?
2
How were the CGI scenes created for National Geographic series WW II Greatest Raids
5
How were starfields / streaming stars created in the pre-computer era?
2
Why do some opening credits alternate the name of the starring role?
16
How are bullet impacts in concrete walls created?
9
What TV series has the longest opening credits?
6
Why isn't Steven Seagal listed in the opening credits?
48
How were Opening Titles and End Credits created before Computers?