Has there ever been a police procedural with occasional recurring supernatural elements? [closed]

Ask Question
Asked 3 years ago
Active 3 years ago
Viewed 689 times
4
Closed. This question is off-topic. It is not currently accepting answers.

Has there ever been a police procedural that generally plays it straight, but occasionally (maybe a couple times a season) brings in some sincerely supernatural element? I know there have been such shows that used the supernatural as their core conceit (The X-Files, Fringe at times, arguably Psych and The Mentalist), but has any show only brought in the paranormal every once in a while, with a recurring psychic detective or ufologist or something?

Well, since you have Fringe on your list, which IMO is a hybrid of story of the week and searialization, which becomes more serialized as the series goes on, one that comes to mind is Longmire.

Longmire is an American modern Western crime drama television series that premiered on June 3, 2012, on the A&E network. The series, developed by John Coveny and Hunt Baldwin, is based on the Walt Longmire Mysteries series of novels by the best-selling author Craig Johnson. The show centers on Walt Longmire, a sheriff in fictional Absaroka County, Wyoming. He is assisted by staff, friends, including a Cheyenne man, and his daughter, a lawyer, in investigating major crimes within his jurisdiction. https://en.wikipedia.org/wiki/Longmire_(TV_series)

Longmire starts off more procederal and continues to have story of the week mixed into the over arching story, while it also becomes more and more serialized. The series is about an old fashioned Sheriff, Walt Longmire, and crimes commited in relation to a nearby Native American reservation in Wyoming. 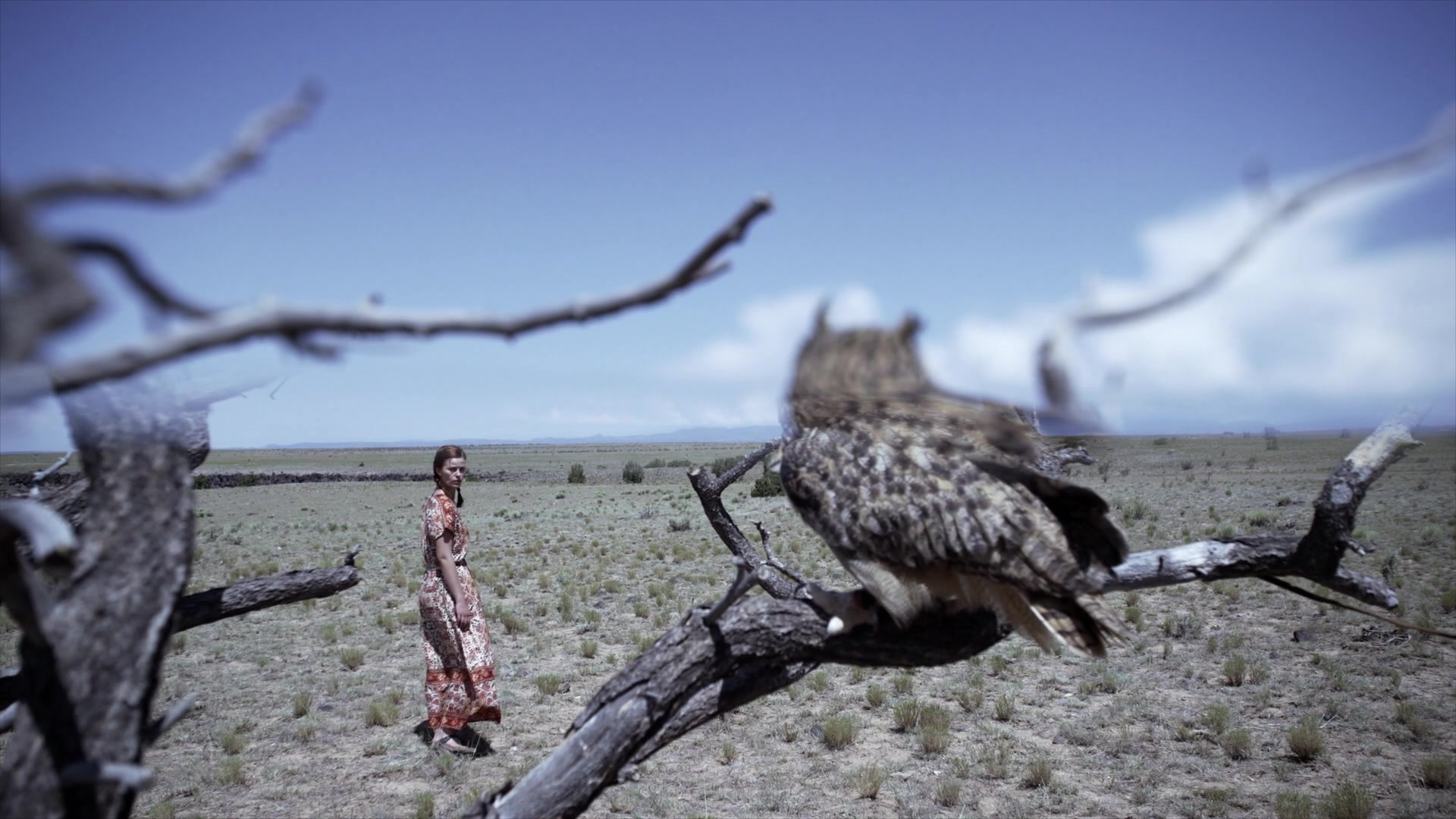 IMO Longmire basically hugs a slow burning magical realism line, where it's debatable if there is a "real world" explaination for what appears to be Native American metaphysical events. However, there are a couple of incidents in the final two seasons, regarding the characters Cady Longmire & Henry Standingbear (respectively), that seem like they go over the line into the superatural.

Craig Johnson the author of the 'Walt Longmire' book series, who was also a writer on the TV Show and looked over all of the scripts, discusses this a bit.

Johnson’s newest novel is “The Highwayman.” It features a strong supernatural element. Wyoming Highway Patrolman Rosey Wayman is hearing strange “officer needs assistance” calls coming in at the same hour – at 12:34 a.m. to be exact — and only in the Wind River Canyon. The calls are all from the ghostly Bobby Womack, a legendary Arapaho patrolman who died in the canyon decades ago.

“I do think there’s a lot more out there than we know, and I like writing about those types of experiences – not Stephen King-type stuff, but just the things out of the corner of your eye,” Johnson said. https://www.abqjournal.com/773956/longmire-author-tries-his-hand-at-writing-about-the-supernatural-and-a-dead-lawman.html

UPDATE: Not sure if all of the following will exactly meet your criteria, but I did think of a few more shows.

Dig is an American mystery/action-thriller miniseries that premiered on USA Network on March 5, 2015, and ran until May 7. Created by Gideon Raff and Tim Kring, it stars Jason Isaacs as FBI Agent Peter Connelly and Anne Heche as Lynn Monahan, Peter’s boss and occasional lover. When Peter investigates the murder of a young American in Jerusalem, he uncovers an international conspiracy thousands of years in the making. The series also stars Alison Sudol, David Costabile, Regina Taylor, Lauren Ambrose, Angela Bettis, and Ori Pfeffer. On May 12, 2015, USA Network cancelled Dig. https://en.wikipedia.org/wiki/Dig_(TV_series)

Awake is an American television police procedural fantasy drama that originally aired on NBC for one season from March 1 to May 24, 2012. The pilot episode had an early release on Hulu on February 16, 2012, two weeks before the series' premiere on television. The show's central character is Michael Britten (Jason Isaacs), a detective who works for the Los Angeles Police Department. Kyle Killen, the series' creator, was primarily responsible for the program's concept; although he served as a writer, he avowed that writing episode scripts was difficult. Killen also served as an executive producer (with David Slade) of the pilot episode. Jeffrey Reiner and Howard Gordon then continued producing (with Killen) for Gordon's Teakwood Lane Productions.

Michael lives in two separate realities after a car accident. In one reality (where he wears a red wristband), his wife Hannah (Laura Allen) survives the accident; in the other reality (where he wears a green wristband), his son Rex (Dylan Minnette) survives. Michael does not know which reality is real and uses the wristbands to differentiate between the two. He sees two therapists: Dr. Jonathan Lee (BD Wong) in the "red reality" and Dr. Judith Evans (Cherry Jones) in the "green reality". At work, Michael's erratic behavior triggers clashes with his team; they do not know about Michael's uncanny ability to solve crimes using details from both realities. https://en.wikipedia.org/wiki/Awake_(TV_series)

Life on Mars is an American science fiction crime drama television series which originally aired on ABC from October 9, 2008 to April 1, 2009. It is an adaptation of the BAFTA-winning original UK series of the same name produced by the BBC. The series was co-produced by Kudos Film and Television, 20th Century Fox Television, and ABC Studios.

The series tells the story of New York City police detective Sam Tyler (played by Jason O'Mara), who, after being struck by a car in 2008, regains consciousness in 1973. Fringing between multiple genres, including thriller, science fiction and police procedural, the series remained ambiguous regarding its central plot, with the character himself unsure about his situation. The series also starred Harvey Keitel, Jonathan Murphy, Michael Imperioli, and Gretchen Mol. https://en.wikipedia.org/wiki/Life_on_Mars_(U.S._TV_series)

Life on Mars is a British television series broadcast on BBC One between 9 January 2006 and 10 April 2007. The series combines elements of speculative fiction and police procedural, featuring an officer from the Greater Manchester Police (played by John Simm) who wakes up in the 1970s after being involved in a road accident. The title is a reference to David Bowie's 1973 single "Life on Mars?, with its lyrics of 'Take a look at the law man, beating up the wrong guy'." https://en.wikipedia.org/wiki/Life_on_Mars_(UK_TV_series)

Ashes to Ashes is a British crime drama and police procedural drama television series, serving as the sequel to Life on Mars.1

The series began airing on BBC One in February 2008. A second series began broadcasting in April 2009. A third and final series was broadcast from 2 April to 21 May 2010 on BBC One and BBC HD.https://en.wikipedia.org/wiki/Ashes_to_Ashes_(TV_series)

The series stars Patricia Arquette as Allison DuBois, a medium employed as a consultant for the Phoenix, Arizona district attorney's office. Allison and her husband Joe (Jake Weber) are the parents of three daughters (Sofia Vassilieva, Maria Lark, and Madison and Miranda Carabello), all of whom inherited Allison's gift. The show was initially based on the experiences of medium Allison DuBois, who claims she has worked with law enforcement agencies across the country in criminal investigations. https://en.wikipedia.org/wiki/Medium_(TV_series)

Castle (with Nathan Fillion and Stana Katic) is a police procedural with comedic elements of the "lawperson and a non-lawperson: together they fight crime!" type (similar to "Bones" or "Numbers"). It's about a New York detective Kate Becket (Katic) and a crime novelist Richard Castle (Fillion) who join forces in solving murders.

Throughout the 8 seasons of the series run there were occasional episodes with supernatural undertones with a "X Files" feel (most probably because one of the show's creators was Rob Bowman, also a co-creator of "The X Files"): aliens, vampires, time travel, a parallel universe... As you said, more or less once per season.

Of course all the "supernatural" occurrences were explained within the show by the down-to-earth Detective Becket, but never convincingly enough for the more open-minded Castle.

I think this may be what you're looking for.

EDIT: An occasional shout-out to "Firefly" is also a bonus :)

Walker, Texas Ranger comes to mind. Most of the time there were the usual police shenanigans, but every once in a while they dealt with ghosts and/or shamanism. Mostly the Native American kind.

Not the answer you're looking for? Browse other questions tagged crime .