Why K/Joe didn't look at his eyeball to see if he were manufactured or born?

In Blade Runner 2049, it is depicted that K/Joe might be born naturally through Rachael, thus not typically manufactured. If K/Joe believed that he is that "special" child then why didn't he simply check his eyeball to see if there is a serial number (like the one shown on Sapper Morton's eye earlier in the film)? 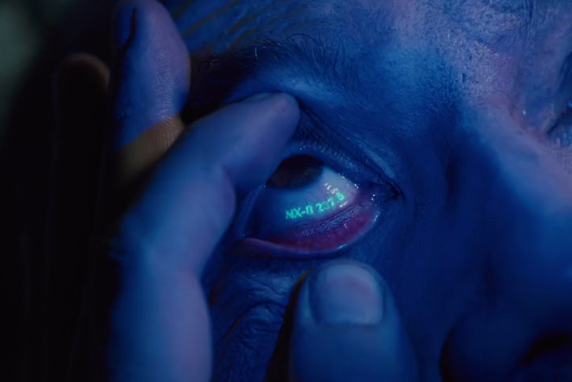 Because if he were born he would never have any serial number anywhere at all.

Is there something I am missing?

Nexus-9 replicants do have an eye code

2036: Nexus Dawn, one of the promotional short films for Blade Runner 2049, shows that Nexus-9 replicants do have an eye code.

Given that K has gone through his life knowing he's a Nexus-9 replicant and works as a Blade Runner, he almost certainly has an eye code as well.

But what does that prove?

Let's not forget too that the "Black Out" (detailed in Blade Runner Black Out 2022) destroyed a great deal of information about the past. This means that there is enough unknown information that K can never know for sure if he's got the whole picture.

K is interpreting evidence to mean he is the child

Regardless of any proof that K finds, we see throughout the film that he wants to be the child. First, there is Joi encouraging him to think this way:

I always knew you were special. Maybe this is how. A child. Of woman born. Pushed into the world. Wanted. Loved.

We see too when he visits Dr. Ana Stelline, she looks at his memory of the toy horse and says:

Yes, this memory happened to someone.

Later when K meets the hidden colony of replicants, their leader says something along the lines of "You wanted it to be you." This is clearly a tragic flaw with K: he never attempted to disprove that he was the child once he had convinced himself that he was.

Even if K found all sorts of proof indicating that he wasn't the child (including an eye code, different DNA from the birth records, serial numbers on his bones, whatever), he likely would have still hoped that it was part of the coverup to hide him, the child.

The stories do not tell enough for us to assert that looking into K's eyeball could discard him as an hybrid. Him doing so would not prove anything.

Here is a speculative example among the many possible explanations that illustrate this fact:

It is possible that hybrids inherit the eye mark from their replicant parent.

We do not know exactly about the technology involved in android making. Part of it is probably genetic engineering, and procreation involving androids could follow rules similar to those of genetic heritage. If you reply that we have not been shown this marker in Rachael's eye in the first movie, we could imagine that the technology enabling it (for example nano-robots translating the genetic signature of a replicant into a human-readable hash identifier displayable on an otherwise concealable surface of the subject's tissue) and the legislation enforcing it (a law ordering that all replicants should integrate these nano-robots, simply implemented by releasing the nano-robots "in the wild"), have been established subsequently to the events depicted in the original Blade Runner.

Then it is possible that the nano-robots propagate from the mother's blood to the baby before birth. Actually not even this part is necessary since the nano-robots could just be invisibly polluting the air in every location around the world, and by design gather into any humanoid close-by.

Actually maybe humans are also infected by those nano-robots and, when lit in the eye, exhibit a similar ID computed deterministically from their DNA sequence - difference with the replicants being that the first digits are always "42", allowing to discriminate them. Of course there was no need in the movie to explain this much detail, which is why it is not shown. The fact that removing the eye makes it impossible to determinate if you are an android still holds with this explanation.

So in this world, both natural, artificial and hybrid humans have this identifier in the eye ; K/Joe has one, Dr. Ana Stelline has one, Rachael had one and even Rick Deckard has one (he lived in a particularly contaminated area where atmospheric nano-robots are not the major environmental issue).

The first digits make it possible to tell if someone is a manufactured human or not. Hybrids actually have the same initial digits as humans, but apart from the few people that know the true nature of Ana Stelline, it is a fact ignored by everybody (including K/Joe).

This is why K/Joe does not check is ID: he does not know how this could prove or disprove his possible human origins.

4
Why didn't Tri-Klops see He-Man hiding in Castle Grayskull?
7
Why didn't Dennis see Casey when he entered the car?
3
Why didn't the Father see blood in the movie It (2017)?
14
How does he have those memories?
9
Why is this character in a bubble?
6
Why didn't Seita return to his aunt?
3
Why is Joe attacked earlier in the movie "You were never really here"?
4
Why has nobody looted or settled Las Vegas?
3
Why didn't Harriet Vanger look for protection with Henrik?