What does the new PGA guidelines on sexual harassment state? 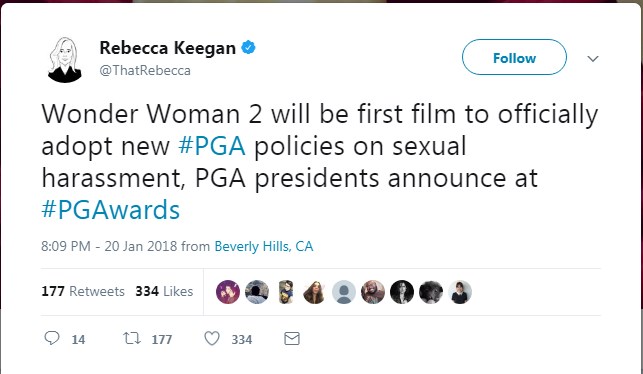 What is this new policy and what does it state?

I mean sexual harassment was never allowed in Hollywood in the first place (... because its illegal)

Does policy state the film/film cast/producers have to do anything extra that they already haven't done?

Is it just that if you're caught harassing anyone you have extra penalties?

The Producers Guild of America aka PGA has made some new guidelines to tackle sexual harassment due to all the recent controversies and deadline.com listed them here:

The Producers Guild of America has adopted new guidelines designed to combat sexual harassment in the entertainment industry. The guidelines, which were unanimously ratified Wednesday at a special meeting of the PGA board, represent the initial recommendations from the PGA’s Anti-Sexual Harassment Task Force, which was created last October in response to the avalanche of allegations of sexual harassment and abuse by high-profile industry figures.

“Ultimately,” the guild said, “prevention is the key to eliminating sexual harassment in the workplace. Through sufficient resources we can educate our members and their teams. Together we must model our commitment to a workplace free of harassment and encourage colleagues to do the same. “

The guild’s recommendations to its members include the following:

The PGA also provided a summary provided by the U.S. Equal Employment Opportunity Commission, which enforces laws that prohibit sexual harassment, which is a type of sexual discrimination. Which is also listed in the mentioned link.

The full guidelines are present on the official site of the PGA too:

And as you said in the question itself, Wonder Woman is the first film to follow these new PGA guidelines. From io9.gizmodo.com:

On Friday, the Producer’s Guild of America released a set of guidelines to prevent and deal with sexual harassment on film sets. Yesterday, it was announced that the first film to implement those guidelines will be Wonder Woman 2.

This announcement came at the Producer’s Guild of America Awards on Saturday, as reported by Vanity Fair. This announcement comes after November’s news that that the Wonder Woman production had parted ways with producer and financier Brett Ratner, who was accused of sexual harassment by a number of women, including Ellen Page (who worked with him on X-Men: Last Stand) in a bracing account.

The PGA guidelines, released on Friday, outline a number of ways film productions can stymie the tide of sexual harassment on sets, from the basic—obey local and federal guidelines regarding sexual assault—to more proactive efforts, including designating advocates on set to whom workers can report concerns without fear of reprisal.

Not the answer you're looking for? Browse other questions tagged production casting film-industry .

9
Why is there no Wilson brother in the new Wes Anderson movie?
25
What Unit Does the BBC News Countdown Timer Count Down?
15
Does AMC have some kind of linkage/negotiation with the British entertainment industry?
3
What is the first major film that used drones?
7
What does a guest director do?
3
Why is Atlanta Georgia becoming the new Hollywood?
9
What does "vrit' mean with reference to documentaries?
2
Why could this actor on The Expanse not simply be replaced?