We know that Phineas and Ferb are step brothers. It's obvious that Ferb has head shaped just like his fathers'. Is Doofenshmirtz maybe Phineas's real father since they have very similar triangular shaped heads and they are both very creative and inventive?

There were also some hints that Doofenshmirtz was with Linda. 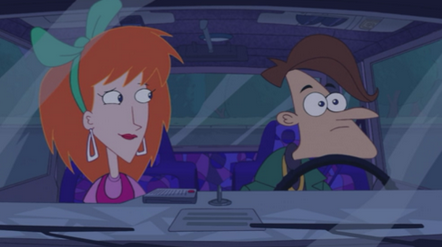 Is there any in or out universe explanation about this?

Very unlikely. We only know about one date which didn't even end well:

Doofenshmirtz then tells him about one of his first dates. It was with Linda Flynn and they were in a drive-in theater, going to watch a film. Linda says that she would like to be a pop star one day. Doofenshmirtz sarcastically replies that he will take over the world, and she suggests that he should start small and try to take over the Tri-State Area. Doofenshmirtz says it's unlikely but he'll try. He then brings out a machine to make the movie's sound 5th Dimensional and attaches it to their car. Unfortunately, the machine makes the cinema screen explode and blast off into the sky. Whilst finishing his flashback, Doofenshmirtz trips on one of his traps and knocks his latest machine into the Flynn-Fletcher house in the front lawn. - phineasandferb.wikia.com

I don't think in one date he can father two children and it didn't even end well. From wikipedia:

Phineas's birth father is never present or discussed in the series, something Marsh and Povenmire have stated that they fully intend to keep that way.

Same applies for Ferb's mother too. We don't know. Fans can make any theory, but the creators want to keep it in suspense.

And many sources/people (1, 2) claim that creators have denied this theory.

Another thing detracting credibility from your theory is that not only is the head-shape thing not shown to be hereditary in-universe (Candace and Isabella both have semicircular heads, and they're clearly not related), but Phineas Flynn and Heinz Doofenshmirtz also have different variants of triangular head shape. Phineas, for example, has a long pointy nose, while Heinz has his chin as the point of his triangular skull. And this can't be chalked up to art style, either; Heinz and his father both have the chin as a vertex, whereas Phineas is always shown with the nose as a vertex. Even Marty the Rabbit Boy, the show's other triangular-headed character, has a different facial structure; Marty's vertex is simply the edge of his face. With such wild anatomical differences, it's a miracle Phineas and Heinz are even the same species (actually, legally speaking, they're not!).

I'd also argue that though Phineas and Heinz both seem to be master engineers, that's maybe the only quality that the two share. Heinz is a classic screwball with a fractured childhood, unconventional relationships with others, and deep, unresolved animosity. Phineas is a curious, inventive, optimistic boy for whom life seems to be a world of pleasure - he's rarely ever seriously upset at anything (outside of special episodes, as Buford remarks).

20
Shiny and new in "vehicle mode", yet battle-damage re-appears in "robot" mode
10
Why does the president of the Federation look like a Klingon?
4
Is there a trend in recent crime shows to complement eccentric protagonists with grown-up and intelligent daughters? Why?
11
Why did Michael Corleone fail where his father succeeded?
4
Are James Delaney's less British habits of Nootka or African origin?
10
How aware are the Phineas and Ferb characters that they're in a TV show?
29
How does Dr. Doofenshmirtz know Perry's name?
2
How come that agents in O.W.C.A are special kinds of animals, but other animals are normal?
7
How do Phineas and Ferb fund their projects?
6
Is there an in-universe explanation as to why the Ancient One is bald?