Seen on his arm. 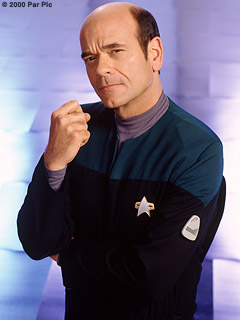 Why don't they create more holographic programs, equip them with the mobile emitter and send them on away missions? Especially in areas that are hostile, or not safe for humans(planets where they have to wear space suits or protective gear).

Even if one of them died, you could re-upload the program to another mobile emitter, provided they keep backups. No more red shirts ;).

Why don't they create more holographic programs, equip them with the mobile emitter and send them on away missions?

Mobile emitters are 29th century techology and Voyager is a 24th century ship.

They can repair/adjust the mobile emitter but they do not have the resources or ability to reproduce the emitter.

The autonomous self-sustaining mobile holo-emitter, or mobile emitter, was a piece of 29th century technology designed to remotely power and enable a single holographic instance away from permanent holoemitters. Constructed of a poly-deutonic alloy unknown to 24th century science, the mobile emitter was approximately the size of a Human palm.

In The Light Fantastic (a TNG Novel), Data and Commander Geordi La Forge talk with The Doctor and Lieutenant Reginald Barclay about the possibility of replicating the emitter for general use, but The Doctor confirms that the emitter cannot be replicated by current technological standards.

In Voyager Season One Episode 7 - "The Eye of the Needle" - the Doctor up to that point had been treated as nothing more than an appliance and seemed to have very little rights. During this episode, Kess brings her concerns to Janeway and things begins to change. After she realizes her mistake, Janeway tells The Doctor that he has become a full-fledged member of the crew and from that moment on he was treated as the Chief Medical Officer of Voyager.

After this event, The Doctor was sent on away missions that could accommodate a hologram when a medical officer was needed. And when he acquired the mobile emitter in the "Future's End" episode during season 3, the mobile emitter belonged to the Doctor just as another member of the crew would own something... like a pair of shoes. This is why Janeway did not create an army of red shirt holograms to use the mobile emitter for away missions. The emitter was borrowed on occasion... such as the time the Barclay hologram needed it... but always with permission from the Doctor.

Bottom line, the emitter "belonged" to the Doctor and if a hologram was needed to go on an away mission it would be him. Janeway was not going to upload multiple hologram programs to the emitter... it was for The Doctor.

7
Is there a canon explanation for certain holodeck differences between Star Trek shows?