Tales of the Code: Wedlocked and Pirates of the Caribbean Timeline

There is a short movie Tales of the Code: Wedlocked which is like a spin-off to the Pirates of the Caribbean movies.

It involved something like the marriage of Jack Sparrow.

So how is this story related to the original movie series?

It's a prequel to Pirates of the Caribbean: The Curse of the Black Pearl.

The short film serves as a prequel to The Curse of the Black Pearl, explaining just why Jack Sparrow's boat, the Jolly Mon, was seen sinking at the beginning of the whole story, and explaining why wenches Scarlett and Giselle were so upset with him, and it also implies how Cotton lost his tongue. The plot took inspiration from the "Auction scene" from the original ride.

We can date this because it features Cotton when he could still speak...

Cotton was a pirate who operated in the Caribbean during the Age of Piracy, most notably during the mid-18th century. Little is known about his early life. Prior to joining the crew of the Black Pearl, Cotton had his tongue cut out, due to an encounter with Mungard. He subsequently trained his loyal parrot to speak for him -- though how he achieved such a feat, as a mute, remains unknown 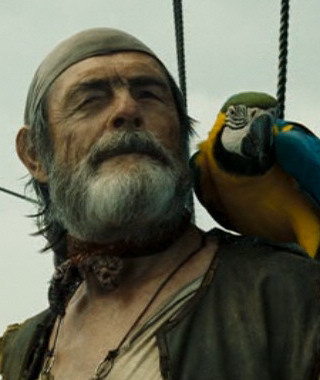 Scarlett also showed that she took out four nails that went on Jack's boat in case he had "cold feet", immediately showing Jack Sparrow trying to get water out of the boat as he sailed to Port Royal.

Not the answer you're looking for? Browse other questions tagged pirates-of-the-caribbean spin-off .