How did Hitchcock enforce the "no late admission" policy for Psycho?

According to Wikipedia, Alfred Hitchcock mandated that movie theaters could not allow late viewers to come into Psycho after it began.

The most controversial move was Hitchcock's "no late admission" policy for the film, which was unusual for the time. It was not entirely original as Clouzot had done the same in France for Diabolique. Hitchcock thought that if people entered the theater late and never saw the star actress Janet Leigh, they would feel cheated. At first theater owners opposed the idea, claiming that they would lose business. However, after the first day, the owners enjoyed long lines of people waiting to see the film.

How did Hitchcock enforce this restriction? I find it hard to imagine in our modern day that Steven Spielberg, for instance, could tell every movie theater in America how to run their operations.

Enforcement is perhaps not the word.

Although the movie studios had considerable sway and influence over theatre owners at the time they could not insist that the owners maintain the policy of "no late admission". It's possible that they could have included a clause into the contracts to this effect but it seems that the studio went for persuasion instead.

What happened was the the studio created a "policy" of "no late admission" and demonstrated to the theatre owners that the policy was good for business.

There was heavy marketing of the director's "requirement" that viewers watched the whole film from the beginning.

The studio created a "movie" as part of their press pack which was given to theatre owners to promote the policy. It can be found on YouTube.

There were "preview / demonstration" showings...

Showings of the film began on a tightly-controlled schedule in theatres in New York, Chicago, Boston, and Philadelphia. And a firm "no late admission" policy was put in place. You either saw the film from the very beginning, or you didn't see it all. Signs appeared in front of cinemas reading:

"We won't allow you to cheat yourself. You must see PSYCHO from the very beginning. Therefore, do not expect to be admitted into the theatre after the start of each performance of the picture. We say no one -- and we mean no one -- not even the manager's brother, the President of the United States, or the Queen of England (God bless her)!"

All in all, it seems that by convincing the theater owners that the policy would actually increase revenue they persuaded them to "enforce" the rule as it was to everyone's benefit. 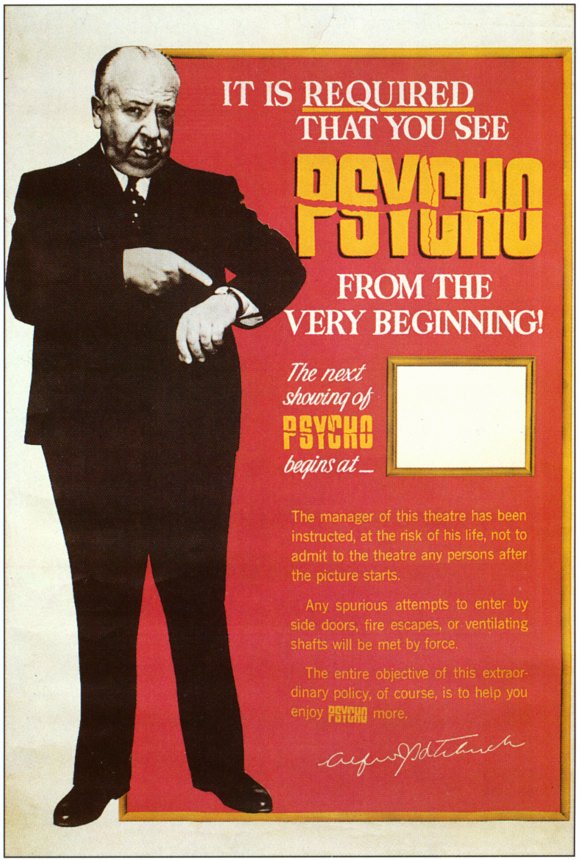 Not the answer you're looking for? Browse other questions tagged cinema-history alfred-hitchcock psycho .

19
Was Alfred Hitchcock a feminist?
4
Was Hitchcock fascinated by the nascent field of brain science while filming "The Lady Vanishes"?
5
What is with the taxidermied animals and birds Norman Bates had in Psycho?
4
What is the term for the movie theater policy and behavior pre movie clips?
6
How did Hitchcock get the still eyeball shot in "Psycho"?
3
What did the writers mean by this detail in one scene of one episode of "Alfred Hitchcock Presents" from 1957?
3
Is Psycho really the very first film to show a flushing toilet?
24
If Sweden didn't have commercial TV channels until the late 1980s, how can these TV commercials from the 1960s and 1970s exist?