Is this pirate in the background a young Edward Teague?

I just watched the fifth Pirates of The Caribbean movie, Dead Men Tell No Tales, and noticed a potentially familiar figure during one of the flashbacks. Specifically, during a flashback to when Jack Sparrow became a Captain for the first time, the movie showed a pirate standing behind him as he surveyed his crew and his tribute:

I couldn't help but think this man in the background looks similar to, and is dressed similarly to Jack's dad, Edward Teague, from the third movie, At World's End: 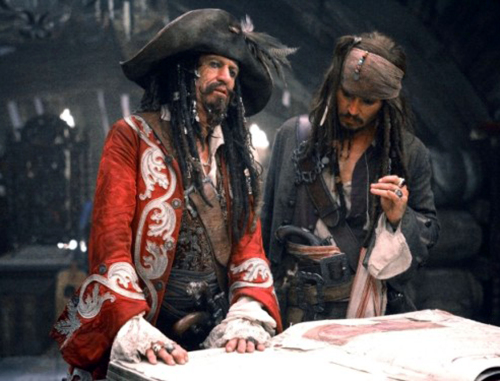 Is this just a doppelganger, or is that really Jack Sparrow's father behind him in the flashback?

Yes, he is Edward Teague and looks like he didn't change his coat since then. Filthy Pirate!

Teague, Jack, and the surviving crew members watched the end of El Matador Del Mar. Teague was standing on the forecastle behind Jack when several crew members offered Jack a tribute. Teague looked from behind his son as he was crowned with his new belongings

According to IMDB, Alexander Scheer was cast as Young Teague.

11
How is the Black Pearl caught up?
14
Where did Sparrow's compass really come from?
11
What is Jack Sparrow's real name?
14
How is Salazars curse linked with Sparrow's compass
6
How did Gibbs become a pirate?
19
Why do "dead men tell no tales"?
16
Tales of the Code: Wedlocked and Pirates of the Caribbean Timeline
4
Why did Jack Sparrow let Will Turner escape?
27
Who are the nine Pirate Lords?
31
How does everyone know Jack's name as Jack Sparrow?