Why did Ford tell Bernard to do that in S01E09?

At the end of episode S01E09 of Westworld Ford forces Bernard to take the gun from Clementine and shoot himself after Ford leaves the scene. In the next episode Maeve finds his body and makes Felix heal Bernard. Later in that episode Bernard and Ford meet multiple times, but unless I've missed it none of them refer to the forced suicide and Ford does not seem surprised at all that the host he murdered without witnesses is up and running again.

So my question is: why did Ford kill Bernard at all?

Since presumably Ford is the one who reprogrammed Maeve to escape, and isn't at all surprised by Bernard's resurrection, he might have orchestrated Maeve finding him. Still, it seems it would be easier to just put Bernard to sleep and make Maeve wake him up? Why leave it to chance that she will go see Bernard with a medical technician who is able to put him back together? Or did Ford actually plan to leave him dead? In that case why not clean his body up or make sure Maeve does not find him? And why the lack of reaction to Bernard coming back?

The way I see it, Ford didn't want to kill Bernard, he allowed him to know all the information he wanted to know (despite he was on control of Clemetine) and hoped that Bernard will make the right decision (in Ford's opinion). When he didn't, he had to kill him (despite it seemed like a difficult decision for him) since he can hinder his plan, but when Bernard "came back" that didn't seem to happen, so Ford had no reason to react.

As For Bernard reaction, or lack of it, we can speculate that he, may be got over it while he's dead(lol), or that his reaction was to actually face Ford later when he has the chance, and he did so after they talked to Dolores, when he confronted Ford about what he's doing, and Ford told him his reasons for keeping the park open all those years. But I think it was simply the writers/show makers choice not to focus on this story line as it's very much a meaningless distraction from the main story lines, and it'll serve no further points since they know how the episode will end.

Another hypothesis, Ford knew that Bernard will woke up (somehow) and although he was normally erasing his mind in those situations, this time he didn't because he knew he'll die soon and wanted to leave Bernard with his memories, since -as we found out- he actually cares about the guest and Bernard.

And Bernard understood that when he woke and found that his memories still intact, which surprised him, so he had no reason to hate Ford. So they were acting as everything is fine between them, because it is.

Still that doesn't explain why did he made him shoot himself in the first place, and what would've happened if Maeve didn't find him and a technician that can help Bernard was with her.

"We humans are alone in this world for a reason. We've murdered and butchered anything that challenged our primacy." —Ford

As the story is ongoing, there are still a lot of "assumptions" which viewers can make. That said, as it stands, IF it's true that

...THEN we could deduce that

"You can't play God without being acquainted with the devil." —Ford

We have seen Ford's enjoyment of cruelty through his interactions with Teddy; behaving much like a Devil playing God (and Anthony Hopkins did play Hannibal Lector in three films after all). He does not allow Bernard the satisfaction of acknowledging his actions, and denies Bernards identity - memory is often a key to our identity and understanding of ourselves 'in the world'. Sometimes it relies on one's own personal evidence and experiences and "collective knowledge/experiences" of others. Ford's lack of acknowledgement may also keep Bernard complacent and on task so that Bernard does not seek revenge or change the narrative (at this point in time).

Another possibility though, is that when Bernard "awoke" maybe he understood and began to trust what Ford was doing... ?

"There is no threshold that makes us greater than the sum of our parts, no inflection point at which we become fully alive. We can't define consciousness because consciousness does not exist." —Ford

One could argue that, if Ford ever really believed (or still believes) this, then it gives him the justification to treat others as he pleases, i.e. and without any real respect or fearing much recourse. If there is no consciousness, then there's no conscience, and then there may not be morality if one's morality relies on a conscious awareness of such beliefs through the biological and/or neurological mechanics of one's mind. (i.e. as Pinocchio says, "Let your conscious be your guide").

"Consciousness isn't a journey upward, but a journey inward. Not a pyramid, but a maze. Every choice could bring you closer to the center or send you spiraling to the edges, to madness." —Arnold

The season finale lets viewers assume that Journey into Night is a narrative about a conscious awakening, and also a revenge story for the Androids. This raises the question again of what Ford really believes or if he cares about anyone other than himself. It (and his brutal treatment of even Bernard) could be seen as a gift to Arnold since Ford let the Androids spiral into this chaos (or madness), to feel pain, and to know the plight of the devil. This allows them the opportunity to have experiences, to find and identify themselves, for themselves (i.e. Androids have fallen from grace and become human). 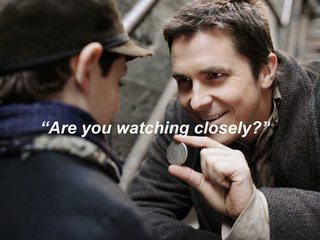 Just to add, Jonathan Nolan often wrote or co-wrote many of the scripts for his brother's (Christopher Nolan) films. He worked on the script for the film adaptation of The Prestige. The film is mostly about an ongoing rivalry and obsession between two magicians, stemming from an accident where one magician kill's the other's wife. The film then has these double-twists that come about by the film's end. There are a few elements in Westworld such as character dynamics (e.g. Ford vs Bernard vs the absence of Arnold vs The Delos Board Members) along with certain bits of dialogue which makes me feel like there are leftover 'Prestige' ideas in Westworld. We may not be able to understand the truth of some of these things, until we reach the end of the series.

"Everything in this world is magic, except the magician." —Ford

2
Why did his sister make a scary face?
13
How did an event in Episode 8 of Westworld occur?
21
Why does no-one recognise Bernard?
8
Is Felix a host?
3
Why did the host technicians obey Maeve instead of shutting her down and cleaning all her data?
11
How is it possible that Maeve can control Bernard?
9
What was Ford's intention for keeping the hosts for 35 years?
8
Is Robert Ford behind “Shade” too?
2
Why didn't the AI do anything about Ford?