Has The Simpsons changed significantly in essence with time?

In the old days one could easily empathize with some characters, thus many situations ended up as funny ones.

Now a days, it's like they try to convince us to empathize with them by giving some explanation, or justification, or a character's actions. It seems like all characters tend to justify their actions somehow, as a parody of themselves.

Could those changes be due to a change in the target audience? How has the show objectively changed over time?

Initially, the show was intended as a broad audience. I started watching the series as a kid, and even as an adult I find it funny, at least the earlier seasons. Now the show seems more like SpongeBob SquarePants or The Fairly OddParents.

The following are some interesting data: 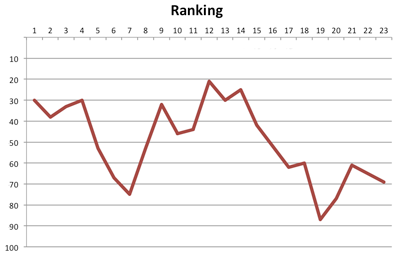 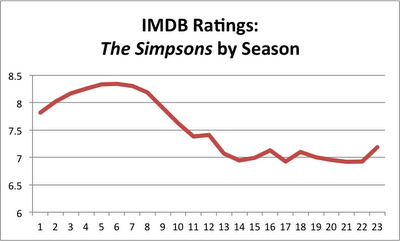 Maybe it could be related somehow.

Wikipedia has a nice section about that

It basically make the same assumptions as in the comments

Critics' reviews of early Simpsons episodes praised the show for its wit, realism, and intelligence.
In the late 1990s, around the airing of season ten, the tone and emphasis of the show began to change. Some critics started calling the show "tired". By 2000, some long-term fans had become disillusioned with the show and pointed to its shift from character-driven plots to what they perceived as an overemphasis on zany antics.

The BBC noted "the common consensus is that The Simpsons' golden era ended after season nine", while Todd Leopold of CNN, in an article looking at its perceived decline, stated "for many fans [...] the glory days are long past."

Jim Schembri of the The Sydney Morning Herald called the show "a cultural touchstone for at least two—possibly three—generations of couch potatoes", but claimed that the show has declined in quality. He attributed this decline in quality to an abandonment of character-driven storylines in favour of and overuse of celebrity cameo appearances and references to popular culture. Schembri wrote: "The central tragedy of The Simpsons is that it has gone from commanding attention to merely being attention seeking. It began by proving that cartoon characters don't have to be caricatures; they can be invested with real emotions. Now the show has in essence fermented into a limp parody of itself. Memorable story arcs have been sacrificed for the sake of celebrity walk-ons and punchline-hungry dialogue."

Another objective critery for the downfall could be top ten ratings like this from the guardian frm 2012 where every episode is prior to season 10.

Not the answer you're looking for? Browse other questions tagged plot-explanation the-simpsons .