In The Greatest Showman, are all of the "freaks" representative of actual biological variations?

In The Greatest Showman, P.T. Barnum hires many people with "biological rarities", including:

I also noticed a man with short horns at the top of his forehead, which I have never seen before. That led me to wonder: Were any of the biological conditions fictitious, and only created for the movie?

These are all real conditions

a woman with a beard

A relatively small number of women are able to grow enough facial hair to have a distinct beard. In some cases, female beard growth is the result of a hormonal imbalance (usually androgen excess), or a rare genetic disorder known as hypertrichosis.

There are numerous references to bearded women throughout the centuries, and Shakespeare also mentioned them in Macbeth:

Notable exceptions were the famous bearded women of the circus sideshows of the 19th and early 20th centuries, such as Barnum's Josephine Clofullia and Ringling Bros.' Jane Barnell, whose anomalies were celebrated. Sometimes circus and carnival freak shows presented bearded ladies who were actually women with facial wigs or bearded men dressed as women

a person with long hair covering all of his/her face

Several circus sideshow performers in the 19th and early 20th centuries, such as Julia Pastrana, had hypertrichosis. Many of them worked as freaks and were promoted as having distinct human and animal traits.

There are famous examples of "Wolf People"...such as 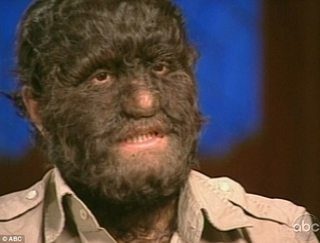 Danny Ramos Gomez, who has been dubbed the 'wolfman', has a condition called hypertrichosis, which causes his body to produce extra hair, especially on his hair and ches

A known an not uncommon medical condition..

Albinism in humans is a congenital disorder characterized by the complete or partial absence of pigment in the skin, hair and eyes. Albinism is associated with a number of vision defects, such as photophobia, nystagmus, and amblyopia. Lack of skin pigmentation makes for more susceptibility to sunburn and skin cancers.

Again, relatively rare but not unknown...

Conjoined twins are identical twins joined in utero. An extremely rare phenomenon, the occurrence is estimated to range from 1 in 49,000 births to 1 in 189,000 births

The most famous pair of conjoined twins was Chang and Eng Bunker (Thai: อิน-จัน, In-Chan) (1811–1874), Thai brothers born in Siam, now Thailand. They traveled with P.T. Barnum's circus for many years and were labeled as the Siamese twins. Chang and Eng were joined at the torso by a band of flesh, cartilage, and their fused livers. In modern times, they could have been easily separated. Due to the brothers' fame and the rarity of the condition, the term "Siamese twins" came to be used as a synonym for conjoined twins.

And another winner...I confess I had my doubts but this is actually a thing called...

Cutaneous horns, also known by the Latin name cornu cutaneum, are unusual keratinous skin tumors with the appearance of horns, or sometimes of wood or coral. Formally, this is a clinical diagnosis for a "conical projection above the surface of the skin." They are usually small and localized, but can, in very rare cases be much larger.

That said, the extreme rarity of this condition makes it likely that any circus freak would, in fact, have been a fake. 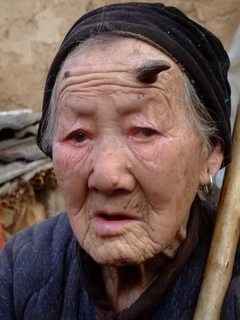 Not the answer you're looking for? Browse other questions tagged realism the-greatest-showman .

13
How close is Masters of Sex to the actual events?
10
Why does the movie Pawn Sacrifice claim that game 6 was the greatest game of chess ever played?
5
Are The Mechanic's tools and gadgets real?
2
How accurate are deportation policies depicted in the show?
8
Why weren't Hitler's actual facial features used in The Man in the High Castle?
9
Why do people show their backs to The Queen all the time in The Crown?
32
Did the actors in All Creatures Great and Small actually have their hands in the animals?